Home » After the Gold Rush Vol. 4 Seeks to Expand a World Forgotten to Time and Nature 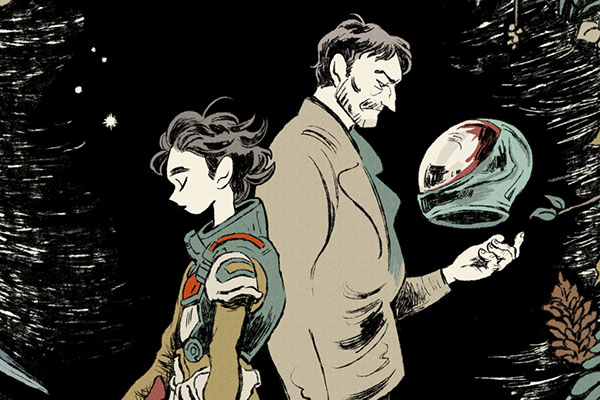 If you are somehow able to cast your mind back to my review of the first 3 volumes of this title, firstly, you have an amazing memory, and secondly, I praised the title for the interesting themes with the clash of science and religion against a lush, overgrown Earth rife with expansion and mysteries waiting to be explored. Now, I finally get around to type my thoughts for the next installment of this tale and whether Miles Greb is able to expand upon the strong base of its predecessors and maybe answer some burning questions.

After the events of our prior volume, Scout, along with our unnamed Woodsman, have fled one of the few settlements of civilisation. Away from those that wish to do harm to our friendly botanist, Scout crosses paths with a “Storyteller”, those amongst the surviving population privileged enough to possess the teachings and tales of old. Here, we learn more of the world before, during a time of great scientific expansion, and how Scout became a part of human lineage living amongst the stars. But stories passed down the generations can be warped and changed over time, so where does the line of fact and fiction begin to blur in this old man’s words? And would they perhaps sway Scout in her goals?

Now in terms of events, this volume may come across as somewhat lackluster, as we have all encountered those characters in media that serve as a source of exposition and to fill in the characters (but mostly you) on events and how things work in this setting. But here, the cliché is implemented well, as the world supposedly only allows a selected group of individuals to learn of the world before, and they pass these tales to justify their way of life, which can be misinterpreted or changed to suit the favour of the speaker. I mean, in a world focused on survival and everyone is out for themselves, who wouldn’t try to sway things to suit you? However, Scout isn’t like any of the other inhabitants of Earth we have seen, as she grew up in believing the facts and drawing her own conclusions from the evidence before her, but the facts are lost to the passage of time and trust could mean the difference between life or death here.

Isaac La Russa returns as the lead artist, and once again, doesn’t disappoint. The attention to detail and setting designs are still insanely high and a true sight to behold. The biggest difference comes from the character designs, as Russa appears to have adopted a more cleaner and sharper design for the main cast. It does feel like Russa has hit his stride with the character and world design, as the narrative has truly allowed him to put pen to paper to build a vivid, natural world full of colour and intrigue, not just through the natural vegetation but with the cold embrace of advancing technology given to us via flashbacks.

All in all, whilst it may come across as uneventful in terms of plot progression, what we have here fulfills its simple objective; to present exposition and world-building in an interesting way that sets the stage for the next installment. New mysteries are presented to us in a clear and understandable manner with fantastic art coming together to bring us brief, but intriguing tales that further expand the world with new ideas, new characters, and perhaps, more noticeably, new questions.

You can learn more about After the Gold Rush through Miles Greb’s website. Have you had the chance to read any volumes of After the Gold Rush? If you were a “Storyteller”, what stories would you pass down the ages? Sound off in the comments or send us your thoughts on Twitter!