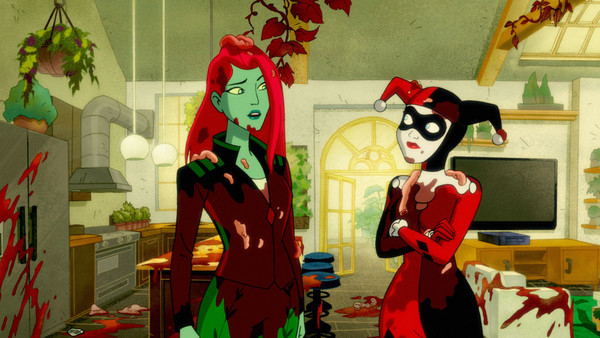 It’s hard to review this show without dropping a few more F-bombs. But I’ll try to keep it PG-13 for a series with enough profanity to surprise Martin Scorsese. After all, Kaley Cuoco, in an interview on The Kelly Clarkson Show describes how her work as the title character Harley Quinn, “has been like therapy for me because I spend two hours in a booth by myself screaming and cursing.” Starting with Season 1’s “Till Death Do Us Part”, where Harley breaks up with the Joker and ending with Season 2’s “The Runaway Bridesmaid”, the show’s final scene tells you all you need to know about its chaotic brilliance.

Written and executively produced by Dean Lorey, Justin Halpern, and Patrick Schumaker, Harley Quinn is a DC universe self-parody. The show details the misadventures of Harley and her best friend Poison Ivy in Gotham City. In Season 1, Harley is hellbent on becoming the most feared villain in Gotham to get back at her ex, but her desires change throughout as she struggles to find an identity. Even when Harley becomes the most powerful supervillain in Season 2, something is still missing in her life.

That missing piece eventually is revealed to be a romantic relationship with Ivy, creating a love triangle. This romantic conflict is caused by the self-identified eco-terrorist’s engagement to the show’s most likable character, Kite Man. “Hell yeah!” As Kite Man toils with his nemesis Condiment King over his dream wedding venue, the show has some surprisingly deep character development. These changes happen when characters don’t feel the need to live up to their iconic superhero or supervillain labels. And this causes some serious shockers. For example, by the end of Season 2, the Joker has gone from the show’s main villain to a suburban dad. And what’s even crazier is that, in the context of Harley Quinn, this actually makes sense.

The show’s comedy is hilarious, but the subtle parodies on iconic DC scenes and characters are what takes Harley Quinn to the next level. For example, Harley slaps the Joker out of his notorious “Batman: The Killing Joke” face. Bane’s voice is a perfect comedic take on Tom Hardy’s portrayal of the character in The Dark Knight Rises. Also, Batman, at one point, pulls out shark repellant to subdue King Shark, paying homage to the late, great Adam West. 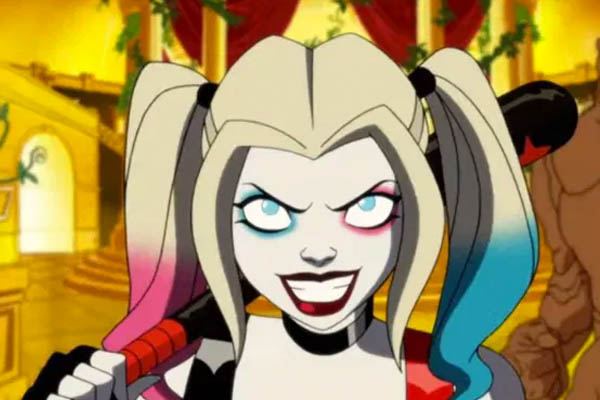 Adding to the show’s absurd nature, murdering or saving people for superheroes and supervillains is shown as a day-in-the-life task. And many of these characters are usually busier with petty thoughts or personal issues rather than their jobs. Clayface is always more focused on his next thespian task as a shapeshifter. Jim Gordon always wants to graphically detail the problematic intercourse that he’s having with his wife. And Ivy is at her angriest when Dr. Psycho puts a hole in her $13,000 Vera Wang wedding dress. This makes sense of course because Ivy wasn’t even sure about purchasing the dress but now has to. Speaking of Dr. Psycho, he commits the most heinous crime in the whole series by calling Wonder Woman the C-word. So, there are at least some rules in this universe, as not even Darkseid would utter this phrase.

While the first season builds to a showdown between Harley and Joker, ending with the Joker falling into what can be described as a vat of lobotomy chemicals, the second season, despite Harley’s battles with Parademons, Dr. Psycho, and the newly formed Injustice League, builds towards Kite Man and Ivy’s wedding. The last scene of the ravaged wedding courtesy of “a damn good cop” is the show at its best.

Gordon chaotically busts the wedding and tries to arrest all the supervillains at the event so that he can eventually run for mayor (makes sense right?). Meanwhile, Clayface gives a perfect rendition of Cielo E Mar as the three major characters find closure in their love triangle.

As noted before, the show revolves around characters attempting to grow out of their labels. That is except for Psycho who continues to commit the worst crime possible. But Kite Man, for the most part, has the least amount of character development until the final scene.

Instead of being endlessly positive and forgiving is his relationship, Kite Man realizes that Ivy doesn’t love him. He comes to this conclusion during the vows and the idea of having to redo his wedding is the final straw. Kite Man finally decides to break it off with Ivy and soars off on his own. Yes, seeing “Just Married” written on the back of his kite was tough. But, this scene paid its respect to a character who really “deserves the best” by giving him some closure. Kite Man might’ve been simple, but he was not a fool.

Similar to Harley being so consumed with how the Joker and the members of the Legion of Doom thought about her in Season 1, Ivy realizes that she was too worried about what Kite Man wanted instead of herself. This pause was the major factor in Kite Man’s final decision. In the end, Ivy, similar to Harley in the “Bachelorette” episode, confesses her love for her best friend. The two kiss in the middle of a wild chase scene leaving us with a “the end?”

While I would be perfectly fine with the show ending on this note, with so much DC material to work with and still some unanswered questions at the end of Season 2, there’s very little reason to say anything but “Hell yeah!” at the prospect of a Season 3.

What do you thing of Harley Quinn? Do you want to see a third season of this wacky comedy? Sound off in the comments or send us your thoughts on Twitter!