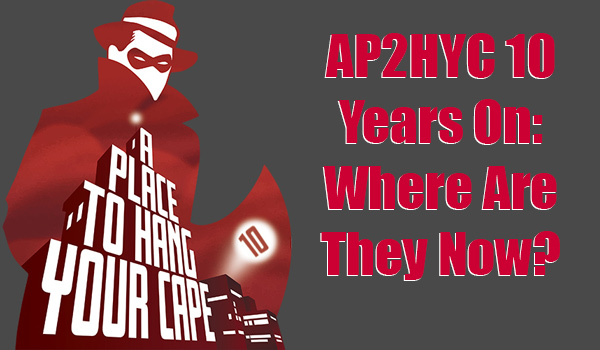 A Place To Hang Your Cape has changed a lot over the course of its 10 year history. Originally, AP2HYC was run solely by Founder & Editor-In-Cape David Molofsky, who fondly remembers launching the website whilst wearing a Batman t-shirt in a Starbucks one sunny Halloween in 2010, and who also hates writing about himself in the third person and run on sentences, but loves meta-humour. 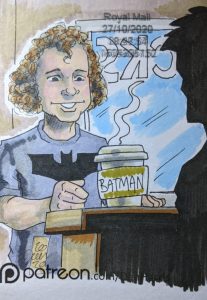 At any rate, I ran AP2HYC alone until February 2013, when the site saw a complete relaunch and finally took on some new writers. This was also the time when the site shifted to include indie comic reviews, which is now our main content focus.

Some of the people who joined me in those first few months are still working on the site today – most notably Mark Russell and Scott Meridew, who hold the joint title of working with me on AP2HYC the longest (over 7 years!). No wonder Scott has been driven to insanity (which you can witness first-hand on PodCapers).

With AP2HYC turning 10 this month, I thought it was a good chance to catch up with some of our former staff and see what they’ve gotten up to since leaving us.

Grace holds the dubious honour of being the first person other than David to publish an article on AP2HYC. She quickly became a valued member of the team and conducted interviews both via email and in person at comic cons.

From Grace: “I continued writing and interviewing after leaving AP2HYC and am now the editor of Outrageous Bride, a magazine for anyone who wants their wedding, their way! I also run Say Grace Media, a content creation, editing and proofreading business. I’ve worked for non-profits and small companies, interviewing people from Poirot himself (or David Suchet as he insisted she called him) to the Archbishop of Canterbury. In my spare time, I still devour all things comic book and sci-fi and am currently cautiously hopeful that the new Suicide Squad film will live up to the Ostrander run.”

Rob was one of the very first people to join David in his quest to expand AP2HYC. From editing articles to joining David at comic cons, Rob became an integral part of the site. He and David are still good friends, and Rob has popped back from time to time give his thoughts on the latest Doctor Who and join David in pre-pandemic comic cons.

From Rob: “Wow, time flies. When I first joined AP2HYC, I had just graduated film school with dreams of working in TV and had started running my own little blog, Of All The Film Blogs. Now, almost a decade later, I’m running my own little site, Of All The Film Sites and am working on TV – as in the work I do appears on TVs. It was my time at AP2HYC that intrigued my interviewer and got me my first job after uni. That interviewer, then my boss, is now one of my best mates and the other Rob in the Movie Robcast. So, what can I say but here’s to another decade!”

With the workload for Rob ever increasing, Will was originally brought on as an additional editor. However, the team soon realised Will’s talents lay elsewhere, and he started creating content for the AP2HYC YouTube channel and taking pictures of cosplayers. Like Rob, Will has remained close friends with David since leaving AP2HYC and still offers the occasional advice about the site.

From Will: “Since leaving AP2HYC I’ve swapped the dusty back issues sections of comic shops for, well, the dusty second-hand section of video shops; I’m now working as a film reviewer (Indietrix Film Reviews) as well as a video essayist for Little White Lies, the BFI and Arrow Video. I’ve also been hard at work on making fiction films, with my shorts Dalstonian and Citizen of Nowhere playing in internationally-renowned film festivals. Next step, my first feature on the big screen! Still, night after night of pushing budgets around and watching punishingly obscure European trash genre titles, I get into bed and read comics. Currently I’m halfway through The New Mutants, after rounding off a Bendis binge and diving into the most old school Spidey, Stan Lee’s original run.”

As Junior Sidekick, Alex brought not only his stellar writing and editing talents to the team, but also his social media know how, working to get several thousand new followers to the AP2HYC Instagram.

From Alex: “I am currently working as a Digital Marketing Manager for a marketing agency right outside of Philadelphia. I also do a lot of freelance writing for various smaller companies as well as a nonprofit. When I’m not working, I’m still behind the computer screen, either playing RTS games or writing new books.”

You can find Alex’s children’s books and young adult novels at amazon.com/author/realewrites.

David and Tal met at a convention in 2015 and Tal mentioned that she was looking to get more photography experience. She became a regular part of the AP2HYC comic con team for about a year before moving on. You can still see some of her work on the AP2HYC Facebook Page.

From Tal: “I got involved with AP2HYC in 2015 as a photographer and covered conventions with them, as well as creating some graphics for their social media platforms. Since leaving in late 2016 I’ve graduated film school, specialising in sound, and have been working as an engineer in live TV. AP2HYC was a great way for me to incorporate my nerdy side into my work and gave me an edge when I took on jobs in branded content later in my career.”

Rob was brought onto the Senior Team to help with the growing number of Kickstarter campaigns we were promoting. He helped dozens of campaigns reach their goals and helped us build the foundation of the Kickstarter Korner.

From Rob: “In the past few years, I’ve produced content for progressive ergonomic and LED companies, while also making time to imbibe as much tea as possible and rewatch Robocop several hundred times. I still collect comics and Transformers, with no end in sight.”

Katie joined the team back in 2015 when the number of Superhero TV Shows started to skyrocket. She helped build out the TV review content and was key in our most successful TV Awards.

From Katie: “Since writing for AP2HYC, I have moved and renovated a house, had a milestone birthday, been made redundant, had a mid-life crisis, travelled to Canada twice to see my favourite 90s band for the first time in 25 years, started several new jobs (the latest one in lockdown), taken up painting, and published the odd short story. I also has several novel-length projects in development, all vying for my oscillating attentions. I am still a total TV and movie junkie, and I’m equal parts devastated and relieved that Supernatural will be coming to an end after fifteen tumultuous years this autumn.”

Jonathan was promoted to take Alex’s place as an editor on the Senior Team. In the year he was with us, he made a huge impact behind the scenes with his editing (and writing).

From Jonathan: “Since writing and editing for AP2HYC, I have continued his passions for film, television, and popular culture both personally and professionally. I graduated – well, virtually graduated – from Vassar College this past May, with a B.A. in Film and Hispanic Studies. I’m currently working in media production and development at Market Road Films and Flatbush Pictures, two documentary studios in New York City. With no new MCU films to watch in 2020, I am instead devoting my free time to writing feature-length screenplays and taking care of a fledgling herb garden.”

As for me, I’m still plugging away on AP2HYC. I’m extremely proud of everything we have accomplished over the last 10 years and know that I owe the continued success of AP2HYC to the people mentioned on this page and currently on our team.

Outside of AP2HYC, the last 10 years have been massive for me. I moved from New York City to London back in 2011, when the site was only 6 months old. A year later, I got married (and finished my Masters in Screenwriting that same week). Eventually, I swerved from the film industry to digital product development, a move inspired by my time working on the more technical elements of AP2HYC. Since 2015, I’ve been working as a Product Lead on the website Find a Surveyor. The biggest change in my life recently was becoming a father last year. And yes, my Little Hero does have a cape of his own.

There are definitely more big things coming for AP2HYC – oh boy do we have plans. But for me, the most important thing is to continue being a place where people can come and celebrate superheroes and comic books.

Now if you’ll excuse me, I’m going to go put on a cape and toast 10 absolutely super years of AP2HYC!

You can help us celebrate 10 years of AP2HYC with some of our super new merch and listening to this year’s brand new Halloween musical episode of PodCapers!