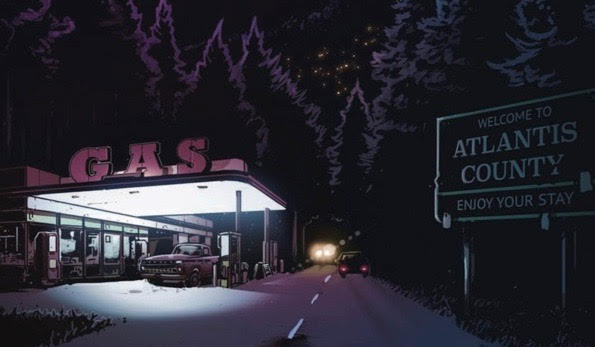 Created and written by Eric Palicki, Atlantis Wasn’t Built For Tourists from Scout Comics is self-described as “Lovecraft meets Leone”. Issue #1 alone doesn’t give quite enough to tell if that comparison is accurate. However, it does start off a very intriguing and well-made tale full of mystery and thrills.

Lucas Lewis is our main character, a mysterious, handsome drifter who wanders into Atlantis County, Oregon. After a good deed of his brings him to town, he becomes acquainted with the suspicious Sheriff Jensen. As the night goes on, it becomes abundantly clear that there is more to the people in this county than meets the eye, including Lucas himself.

I absolutely love Wendell Cavalcanti’s art in this comic. The crisp lines and detailed shadows, the gloomy tones of grey, green, and blue from colourist Mark Dale; it all perfectly captures the macabre air of this shady town. Dale smartly uses more striking colors to amplify situations by virtue of contrast. This makes certain things like the red of blood on a man’s face pop even more.

The beginning of the comic does a fantastic job of building suspense. The way the characters look, they way they appear in each panel subtly reminds you that something is off; the close-ups, the shadows, the slightly askew framing. This constant tension is very engaging. Palicki does a great job at writing the dialogue as well. It’s often snappy, even a little comedic, and hints at a greater conspiracy build-up that air of suspense as the narrative progresses, just like the artwork. 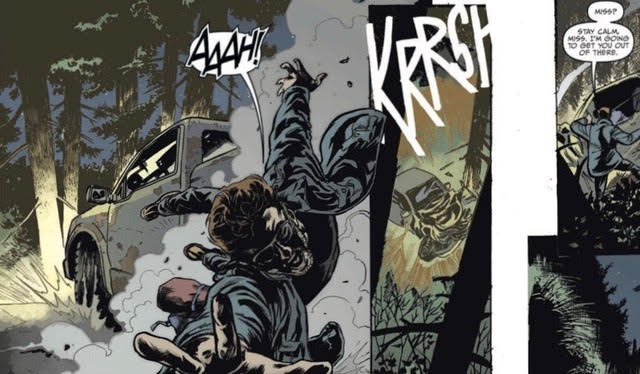 My main problem with this issue is, for a horror/thriller, it shows its hand a bit too quickly in parts. Past the midpoint of the issue, there is a sequence that gives us a number of surprising revelations about our characters and Atlantis itself. On its own, this all works well. However, I do think they happen a bit too soon and a bit too quickly. This somewhat changes the comic’s tone. I personally would have liked to see more of the town, and have the atmosphere and tension fester a bit more before being broken down.

As for the events themselves, I would have liked to see the comic take a bit more time with revealing and focusing on them. Because of how quickly they come and go, without any further context, it does feel a bit rushed. Regardless, I understand the decision. There is still so much left unexplained in the grander scheme of the mystery. For however the series as a whole ends up being, introducing these concepts early may very well work in its favor. Plus, what happens is admittedly very cool.

I really did enjoy the first issue of Atlantis, it just left me a little confused about what the series is trying to be. Still, I’m hopeful. Overall, the comic is competently well-put together and enjoyable to look at. While I may not have expected certain choices it made, I love the “small town, eldritch horror” vibe it has. I have faith that it will be able to justify all its decisions in the long run. For now, I’m quite excited to see what happens next. It is definitely worth a read.

Visit Atlantis County for yourself right here! If you already have, what did you think? Sound off in the comments or send us your thoughts on Facebook or Twitter!