If you are looking for a little bit of truth wrapped in some dark humor, Alex Schumacher‘s Mr. Butterchips: A Collection of Cantankerous Commentary is the perfect anthology to check out. The comics featured were originally published as monthly installments in the online literary magazine Drunk Monkeys, therefore each one can stand as an individual short story on its own. Beginning in 2016, they follow an anthropomorphic monkey, Mr. Butterchips, as he faces a variety of sociopolitical issues in his day-to-day life. It is this compelling protagonist that invites readers to turn the page each time.

Somehow, I find the blunt and angry monkey to be more relatable than most people. Despite his college education, the struggling artist lives paycheck-to-paycheck, drowning in student debt. Sound eerily familiar? Mr. Butterchips puts in very little effort into masking his annoyance as he encounters issues like racism and homophobia. He is fed up with everyone’s nonsense and does not hesitate to communicate his opinions. However, his boisterous personality does not save him from being trampled by society. Mr. Butterchips seamlessly transitions from humorous portrayals of his struggles into more serious moments of reflection.

True to their time, the comic consistently comments on political developments such as the rise of MAGA and the wave of bigotry that arose in the recent years. One comic features a nurse who denies Mr. Butterchips emergency medical service. His tail is accidentally severed but she refuses to treat him on the basis of “some arbitrary perception of moral superiority”. It breaks down the Religious Freedom Act and readers can see how the law actively harms Mr. Butterchips’ chances of saving his tail and the indignation that results from his unjust treatment. It also highlights the hypocrisy behind overtly racist laws that use religion as a justification for discrimination. When Mr. Butterchips shouts in frustration the nurse exclaims, “some people are so disrespectful and offensive”. She fails to recognize the irony in her self-righteous words. 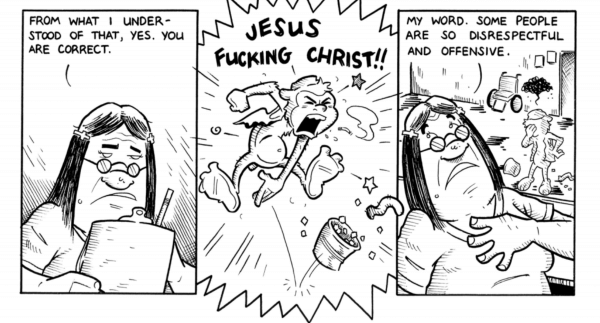 As demonstrated above, the black and white art is reminiscent of newspaper comic strips. Schumacher uses the space of each panel effectively; the background includes just enough information to convey the setting and yet the characters are expressive and detailed. For example, after the nurse incident, Mr. Butterchips is shown with his tail held together with a ribbon to show the lack of medical attention. It is such a small detail, but it connects the issues together and provides a sense of linear continuity.

Some of the stories might require some background knowledge in order to fully understand clever dialogue. But, personally, I feel that this is what a political cartoon should do; it sparks curiosity in the reader about important issues. The comics are snippets of the last four years, as experienced by Mr. Butterchips. His stories appeal to a wide audience because it touches upon so many important issues. The dark humor makes it a perfect read for our time, as we push through the midst of a global pandemic and incompetent governments. It’s easy to feel helpless sometimes but, with Mr. Butterchips, at least we can laugh a little at the struggles in life.

If you are interested in political cartoons check out Mr. Butterchips: A Collection of Cantankerous Commentary! You can find it on Amazon, Barnes and Noble or order it through independent bookstores via Indie Bound. If you are familiar with the comic, how do you relate with Mr. Butterchips? Let us know in the comments or send us your thoughts on Facebook or Twitter!