Home » “Yasmeen” #1 Offers A New Perspective On Conflict in Iraq 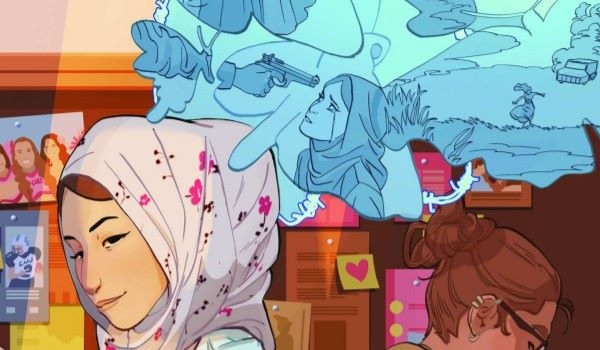 Yasmeen #1 written by Saif A. Ahmed and drawn by Fabiana Mascolo is a startling introduction to a story about ISIS in Iraq and the effects of the conflict on Iraqi citizens. Switching between Iraq in 2014 and Iowa in 2016, the comic portrays traumatizing events that the family have been through and how this changes them.

Shortly after moving to their new home in Mosul, Iraq in 2014, Yasmeen and her family find out that ISIS has entered the city and the army is retreating. Yasmeen and her uncle, Hussain, become separated from the rest of their family. As the two attempt to leave the city, two boys working for ISIS stop them. The boys question and eventually kill Hussain. Meanwhile, Yasmeen’s parents and brother are leaving the city, trusting that Yasmeen and her uncle are safe. The comic then switches to Iowa in 2016 and Yasmeen reunites with her mother for the first time since they were in Mosul, two years ago. Yasmeen is trying to adjust to a new normal, but she has been changed.

Yasmeen #1 does a great job of bringing awareness to the conflicts that have arisen in Iraq in the recent years. In particular, this story is exceptional at highlighting some of the mental health issues that have been brought on by this conflict. By utilizing different color palettes, the comic creates distinguished moods in 2014 Iraq and 2016 Iowa. For example, when Yasmeen is in Mosul, she wears bright colors and stares wide-eyed at everything. She is curious, excited, and has a positive outlook on life. However, this changes by the time she moves to Iowa. At this point, she wears more muted earth-toned colors and appears disinterested in everything despite her new surroundings. The only time she smiles in Iowa is when she reunites with her mother. Yasmeen’s time in Iowa makes it obvious that the events she lived through have changed her. 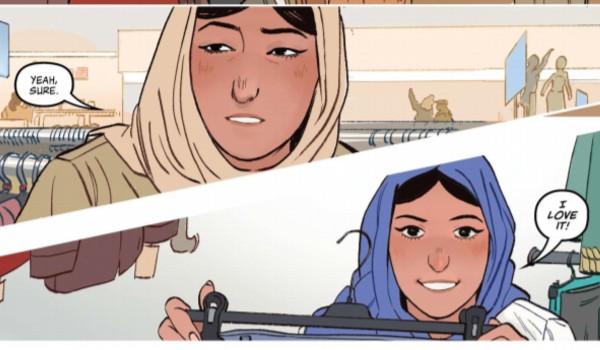 Despite the color palette changing, it can be difficult to tell when certain things happen in the timeline. The setting is revealed through small, subtle details that are easy to miss upon the first readthrough. However, these details help the timeline make more sense. For example, while the family is still in Iraq, one panel shows the father driving when he gets hit by pieces of glass from a nearby explosion. In the next panel, the father is driving with scarred arms. Such cleverly placed details, yet still small enough to miss.

Yasmeen isn’t the only one who has changed. Her father is less willing to donate alms to the poor. The traumatic events that the family has been through have damaged his relationship with God. He even suggests that Yasmeen could stop wearing her hijab; he doesn’t want her to be singled out based on her religion as she once was in the past. The subtlety of questioning religion is an experience that many people can relate to, especially after going through hardships. Adding in this aspect to the comic helps create multiples layers within an already clever story.

Yasmeen #1 is very engaging and interesting. The story provides a unique insight into Iraqi conflict with ISIS and the effects that this conflict has on Iraqi people. The storytelling is very clever, creative, and compelling. The visuals are striking and complement each other beautifully. Overall, this is a very good read that leave readers wanting more. It leaves a lingering curiosity on what has happened to Yasmeen in the two years away from her family.