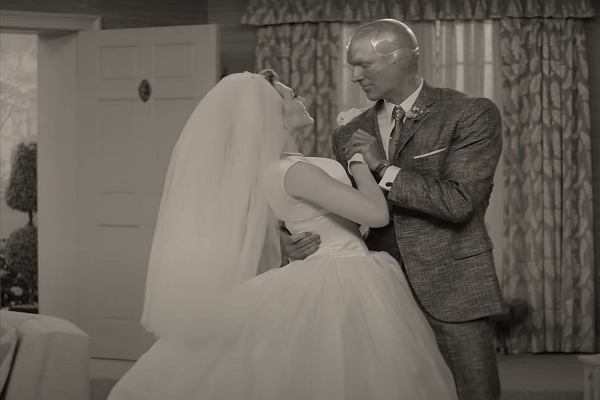 The wait is over. After over a year of no new Marvel releases, the first two episodes of WandaVision premiered January 15th. The Disney+ original series acts as the first series directly connected to the MCU (Sorry, Agents of S.H.I.E.L.D.). This series is not an episodic fight fest nor is a constant barrage of exposition and drama. But that’s not a bad thing.

The first two episodes showcase Wanda and Vision living happily, although a bit confusedly, in a black and white sitcom world that is clearly a parody of Bewitched, laugh track and all. The mystery of the series is clearly revolving around where they are and how they got there. They are trapped in a reality outside of their own yet they don’t even seem to realize it. Aside from a few moments of objects affecting their worldview and Wanda having moments of clarity, the episodes mostly remain rooted in their parody universe and lack many connections to the larger MCU. The series thus far is a slow burn and very tame comedy. There are clear indications that peace will soon be disturbed, it is merely taking it’s time getting there. Yet it works.

To think that a series with two of the strongest characters in the MCU has yet to have a single combat scene is baffling. Yet it works because it is relatable: this reality is something that Wanda would want. In her life before the sitcom, she had to murder her boyfriend  in a great act of sacrifice. Having then watched that sacrifice be meaningless, watching Vision die a second time, and failing her mission. She has a million reasons to want to live in a different world, and she has the power necessary to create that world.

Though not directly stated, there are moments in which WandaVision sells the idea that this isn’t necessarily Wanda & Vision, but Wanda’s vision for the world. If she could rewrite reality why wouldn’t she make it like this. As the mysterious voices on the radio asks Wanda “who’s doing this to you, Wanda?” other characters continuously  poke holes in this fabricated reality. It plants an idea that Wanda could be doing this to herself.

The show thus far is at its best when it commits to the sitcom. Seeing Wanda and Vision frantically preparing a dinner, singing and dancing, and even performing in a talent show are completely hilarious moments that do wonders for their character building. It allows Wanda and Vision to be happy together and showcase their non-crime-fighting sides, which outside of a few brief scenes in Civil War and Infinity War, we have not really seen. Not without world-ending threats or a lover’s quarrel between Tony and Steve ruining their peace. It is comforting seeing them live out a reality where everything can be solved in the span of 22 minutes. Though that is sure not to last.

Overall the first two episodes were funny, quirky and very outlandish. Not something that I ever expected to see from a Marvel series. Especially not one about these two, and frankly I cannot wait to see what happens next week!

What do you think of WandaVision so far? Let us know in the comments below or on Twitter!