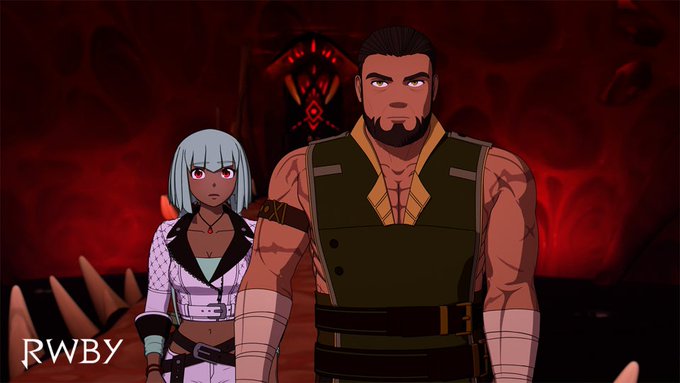 The eighth season of RWBY has been a riveting season of ups and downs so far, but now comes its most exhilarating episode yet. “Witch” follows Yang, Jaune, and Ren as they infiltrate Salem’s gigantic whale Grimm fortress to rescue Oscar. Though it feels like their trek should be a struggle, the payoff of other characters’ journeys help make the battle a lot more easier. For a time, certain antagonists have been going through changes in their loyalties and aims, which culminate in this episode.

The episode opens with all out warfare upon the Grimm by Atlas’ military forces. Winter and the Ace Ops are about to lead the army over the top into the battlefield. Amongst the troops are Team FNKI, looking quite lost and afraid as they clamber up into hell. Marrow, the lone voice of protest in the Ace Ops, is horrified at the idea of sending children into battle, though Elm tells him to prioritise killing the Grimm.

The payload used to blow up the whale arrives, though Marrow privately protests to Winter using it before Yang, Jaune, and Ren escape. He asks her if she would still use the bomb if Weiss was the one in the way. Winter is clearly troubled by what lies ahead, but claims that she would do it regardless, as it is her duty. Though Winter and Marrow are both conscientiously against Ironwood’s decisions, at the moment, both continue to follow orders out of a sense of duty. The needs of the many. Luckily, Winter’s regrets won’t linger for long.

Yang, Jaune, and Ren make it into the whale, Monstra, to begin their search for Oscar. Ren’s evolving Semblance now allows him to sense “spikes” in people’s emotions, able to tell where they are, though not necessarily who is who. Both Ren and Nora’s Semblances have evolved in this volume as they overcome personal flaws. Ren’s negative outpouring of emotions clouded his judgement and rationale, until he turned it inward, realising driving away his loved ones was the wrong way to go about handling his own stress. Ren uses his Semblance to help search for Oscar.

Our favourite farm boy with two souls remains in prison, narrating a fable called “The Girl Who Fell Through the World”. This is an unexplored fairy tale, unlike others detailed in the fantastic book Fairy Tales of Remnant. A hint at a second volume? The story relates to a girl who went on a journey into a new realm, though returned home, sad and alone. Ozpin relates her behaviour to being a different person than she was before. The story may reference Salem, who went on a similar journey, coming out as a different person, a cursed immortal, branded a witch, and consumed by bitterness. It further relates to the characters themselves as they’ve changed and grown.

Ozpin criticizes the “divide and conquer” plan they had used against Hazel, believing the use of magic might be necessary to escape. Oscar refuses, admitting he feels their souls binding every time they use it. Turns out their scheme paid off, as Hazel grabs Oscar, taking him to the chamber of the Relic of Knowledge. Hazel chooses to have Oscar summon Jinn, to see if he is bluffing or not about Salem’s plans. Emerald joins them, having eavesdropped on their conversation two episodes ago, against Salem’s plans for global genocide.

Oscar summons Jinn, who expects her third and final question to be used. Instead, the astonished Hazel decides that her mere presence is enough to convince him to get both Oscar and Emerald to safety (“What Gretchen would have done.”) Removing the Relic would set off alarms, so Hazel prioritises smuggling Oscar out beforehand. As the group leave, Jinn fades, but appears to notice Neo camouflaging in the wall. Why Neo will take the Relic, and what reason for is unknown. Perhaps she is doing it on Cinder’s orders, or for her own survival, or to just throw an umbrella into everyone’s plans.

Ren starts to run out of aura as he searches for Oscar, inspiring Jaune to scout ahead for trouble. Yang is glad that Jaune and Ren have made up, though Ren tells her she doesn’t have to hide her own sense of fear. I’m sure Yang will be fine as soon as she is back in the arms of her beloved kitty-cat. Jaune dashes back and the trio hide as the creepy Seer Grimm floats by, but Ren’s difficulty masking them gives their position away.

Emerald and Oscar, disguised as Hazel, make their way through the whale, only to run into Salem of all people. Luckily, the alarms go off, Salem guessing that intruders have stolen the Relic. She tells Emerald and “Hazel” to find the enemy, whilst she zooms off down the hall Naruto-style to secure the lamp. Yang, Jaune, and Ren agree to charge blindly into danger and take on the Grimm.

Our intrepid intruders run straight into Emerald and Oscar, who Jaune is thrilled to see. Naturally, the group are distrustful of Emerald, though Ren reasons that she is helping Oscar out of fear. Emerald offers to show them the way out. Just as they reach the exit, Salem blasts her way through a wall to confront them and immediately tries to kill Emerald. Yang punches detonator bullets onto Salem’s chest, crippling her, but the witch quickly recovers. Salem manages to pin everyone down with tendrils, interrogating Emerald and Oscar on the Relic’s location.

Salem grabs Oscar, asking why Ozpin continues to come back and fight for what she feels are pointless reasons. Yang asks Salem why she continues to bring death and destruction to the world, all because she didn’t get her own fairy tale ending. Yang blames Salem for all of her losses in life, and rightfully so. Raven abandoning her daughter, the loss of Yang’s arm, Pyrrha’s death, etc. All actions were orchestrated through Salem’s manipulations. Yang brings up the loss of Summer Rose, which Salem reacts to with familiarity, having commented about Summer in front of Ruby last volume.

Hazel arrives, Salem instructing him to return Oscar to his cell, while she punishes Emerald. Hazel appears to do as he is told, picking up Oscar, sneaking him his cane, and whispers to him, “No more Gretchens, boy.” Hazel then punches Salem across the room, rips off his shirt, and inserts five different crystals of Dust into his body. Salem whips up a tornado and engages in an epic magical duel with Hazel. Though the outcome is obvious, Hazel decides to do right by his sister, choosing to honour her own sense of duty instead of seeking to avenge her. He commented earlier in the volume that he repeatedly tried to kill Salem prior to joining her, her slowest recovery time being a mere two hours.

Hazel formed a paternal friendship with Emerald, who is clearly confused and conflicted. Her loyalty to Cinder earns her no thanks or affection, whilst the one person who was looking out for her is more than likely not going to survive into the next episode. Jaune, Yang, Ren, and Emerald make a break for it, but Oscar stays behind to hold off Salem, willing to use his magic to stop her.

As Salem flies at Oscar, Hazel grabs her and pins her down, igniting fire Dust to burn the witch and himself. Even with Salem choking him out with a tendril, Hazel orders Oscar to launch a magical energy blast at them. The episode ends in dramatic fashion with Oscar activating the power of his cane, consuming the screen in light. Salem will no doubt survive, though the same can’t be said for Hazel. It is possible Salem will force him to  live and then use him as a guinea pig for future experiments.

The biggest loser out of this venture may be Cinder, who will discover both Emerald and possibly Neo have abandoned her. What Emerald will do now is up to her. Either she will go crawling back to Cinder, or find trust and appreciation within Team RWBY and friends. As this volume goes on, characters have been making many difficult and dire choices, some with consequences, and some without. Now, with Emerald and Hazel making their decision, Salem’s fury will likely be swift and terrible. But, how would General Ironwood react if Winter and Marrow try to do the same thing?

What were your thoughts on this episode? Will Emerald find a new purpose in life? Why do you believe has Neo stolen the Relic? Leave a comment below, or on our Twitter feed!