Home » RWBY: “Dark” Is the Gripping 100th Episode of the Series 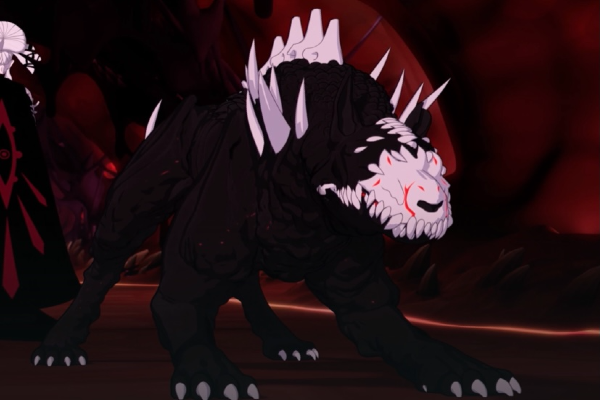 RWBY returns after a mid-season break, in order for the animators at Rooster Teeth to complete their work on the volume. Just in time for the 100th episode of the show. The series certainly has come a long way since its original four trailers. To bring the volume back with such a milestone was likely not intended, since the schedule had to be chopped in half due to outside circumstances. In some ways, the episode felt like it was being built up to something.  “Dark” is a decent episode with a gripping sense of dread, though the revelations in the story feel a little underwhelming.

The episode begins and ends with the Atlesian prison, where Qrow, Robyn, Watts, and Jacque are trying to get some shut eye in the chaos. Too bad for them, as Cinder explodes her way into the prison to bust out Watts, flying off with him in order to locate Penny. Qrow, Robyn and Jacque presumably survived, the former two likely plotting to go after General Ironwood. Jacque, on the other hand, will likely look for the nearest way off Atlas. Interestingly, a certain black bird appears prior to Cinder’s arrival, warning Robyn of the collapsing ceiling. Has Raven come to the rescue of her brother?

At the Schnee manor, Penny crash-landed at the end of the last episode. In disrepair and “bleeding”, Penny glitches out between her normal mode and Watts’ control, as indicated by her red eyes. Nora, who was injured earlier in the volume, awakens to find Team RWBY, Whitley, and Klein trying to figure out how to fix her. May Marigold has left to help rescue the people in the Mantle crater.

The power goes out, bringing a semi-drunk Willow to join the party, suggesting that the estate’s generators can be switched back on. Whitley continues to earn brownie points, suggesting he used his company perks to send unused aircraft down to rescue Mantle’s citizens. Ruby and Blake head out to restart the power, whilst Whitley goes to Jacque’s office to access his computer. Ruby and Blake get to have a rare conversation together. Blake confesses her admiration in Ruby, finding the ability to have hope when around her friend. It is a nice growth from how they first met, where Ruby’s optimism clashed with Blake’s embittered cynicism.

Sadly, their chat comes to an end when the big bad Hound shows up to look for Penny. Or rather, he grabs Ruby first, repeating the mantra of “Take the girl.” Things only get worse when Willow runs off to hide, and Penny wakes up out of control, though Nora temporarily calms her down. The Hound tosses Ruby away upon realising it has the wrong girl. Drawn by Penny’s blood, Weiss gives chase, but Blake faces off against an incredibly hideous, acid-spewing Grimm, until Ruby wakes up and kills the creep.

Weiss follows the Hound inside, aided by her mother using the mansion’s security cameras to watch out for the monster. The Hound is drawn to Whitley, who gives the order, before ducking behind the desk to hide. The Hound senses him, only for Willow to use her Semblance for the first time and tramples the Hound with a summoned glyphic Boarbatusk. The Schnees flee, Weiss whipping up a wall of ice to save her mother and brother, proclaiming that she didn’t forget them. Weiss does not intend to abandon her family again, though the same can’t be said for her father.

Penny enters Terminator mode again, heading out to follow her new orders: open the vault and self-terminate! That sounds more like Watts’ orders than Ironwood, since he would still need Penny’s powers to use the Relic of Creation. The Hound throws Penny around and takes her captive, using her as a shield like it did with Oscar. Ruby gets pissed and unleashes her Silver Eyes, blasting the Hound out a window.

But then, the Hound crawls back into the house and the truth behind its creation is revealed. Most people may be anticipating it to be Ruby’s mother Summer Rose, captured and mutated by Salem. Well, this turns out to be incorrect. Instead, the Hound is using a wolf-eared male Faunus as a host, who has silver eyes. It is a particularly horrific sight, with half his face scarred. How Salem was able to do this is unknown, and could be too horrific to reveal!

Ruby is petrified as the Hound repairs itself, advancing on her team, repeatedly screaming to “Take the girl!” That is until Willow and Whitley get the drop on the Hound, crushing it underneath a very big statue. For such a menacing monster, the Hound’s death is underwhelming. Viewers expecting a dramatic reveal of a corrupted Summer Rose will be in for disappointment. Granted, this was a communal theory, but one that felt like it was being hinted at through the direction of the story.

Still, the guess that the Hound was a Silver-Eyed Warrior was true. It makes sense for Salem to not just exterminate them, but to perhaps study them as well. The Hound was described as an experiment by Salem, so there may be more Hound-like Grimm waiting in the wings, including Ruby’s mother. Furthermore, the Hound’s end comes as a surprise, particularly in the manner of its death. One would expect at least a main character to defeat it, and not at the hands of Whitley of all people. However, the statue pushed represents the armour of the Schnee founder Nicholas, and could serve as a symbolic redemption for the Schnees.

The episode does not end with relief, but rather with foreboding dread. Team RWBY were unaware of the Hound’s true nature, so it comes as a shock to them. Although there isn’t any particular focus on the Faunus having silver eyes, it might be referenced later on. This may alert Ruby to her potential fate if Salem ever captures her, and what became of her missing mother. The Hound fades, but the deformed bones of the Faunus remain, the first time a Grimm has left any physical traces behind.

Overall, “Dark” was a welcome return for RWBY, and though a little low key, it is serves as a good 100th episode for Monty Oum’s creation.

What did you think of RWBY’s return? Was the episode good or underwhelming? Leave a comment below, or on our Twitter feed.