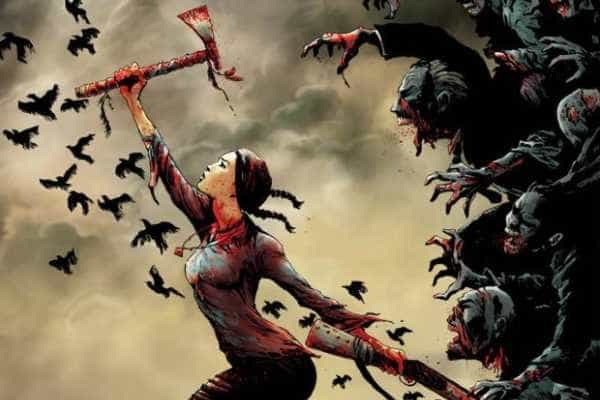 Horror readers, and fans of all things zombie, are spoilt for choice in comics. But series like The Walking Dead are almost impenetrably long, so good horror one-shots like Crow Creek are always a welcome read. Crow Creek is currently crowdfunding on Kickstarter here – and it’s a riotous feast for fans of zombie horror.

The comic sees a Native American reservation become overrun by man-eating monsters and its quick descent into carnage. It’s a brisk 26-page read; between the clear, punchy moments of action and an engaging twist halfway-in, it meant I finished the comic in a single sitting quite quickly. That’s no slight on the comic though. It’s very well-paced with characters efficiently introduced through insightful arguments and banter. Writer John Freeman thoughtfully uses these characters to reference the issues that affect life on a reservation such as this, making the most of the setting before the zombies attack. Crow Creek introduces a location I wasn’t very familiar with going in, with a Native American reservation. It’s clear from the details in this setting that artist Michael Yakutis also spent time ensuring this was represented with extra layers of authenticity.

Yakutis’ art is cinematic. Wide and thin panels are naturally cinematic and from the outset, Crow Creek has the tone of a suspenseful desert thriller. We’re introduced to the reservation with washed-out colours, under the white heat of the hidden sun. This palette remains as the undead burst into pages; the washed-out greys of the sky almost foreshadow the zombies’ drained skin. Yakutis’ zombies do feel like corpses. They aren’t glamourised and neither is the gore which surely follows their attack.

Crow Creek uses this violence impactfully. There’s bursts of explicit and garish gore; one memorable panel is a dynamic shot of a tomahawk to a skull! Zombie action like this comprises almost half the comic. But pages after, there’s the even more impactful and horrific aftermath of the chaos; of corpses and blood. After the thoughtful characterisation at the start of the comic, sequences showing the wake of the zombies’ chaos and having the surviving characters mourn is all the more emotive. There’s consistent beats like this in Crow Creek that ground the story with a tangible setting and realistic characters.

Crow Creek has a contained story, but even though everything is wrapped-up by the end, there is definitely scope for a longer series if Freeman and Yakutis intend it. Now’s the time to support the Kickstarter if that’s something you’d like to see!

Have you supported Crow Creek? Sound off in the comments or send us your thoughts on Facebook or Twitter!