Home » “Finger Guns” #4 Is The Most Somber Entry Yet 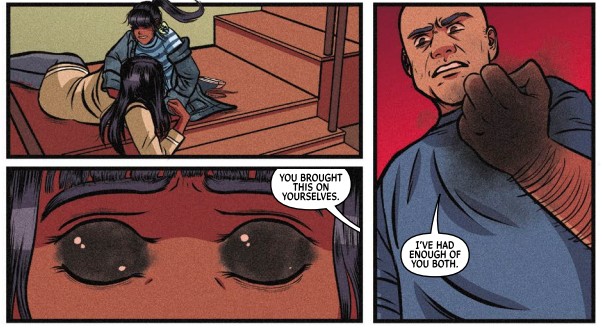 Finger Guns #4 by Justin Richards and Val Halveston continues to forward the struggle between Sadie and her father in perhaps our most dour entry yet. While the previous issues bounced between scenes of levity and trauma, this features no bonding moments between Wes and Sadie. Rather, it solely focuses on the main conflict of the story. And that is Sadie trying to stop her abusive father.

The issue begins with a rift between our protagonists. Sadie decides the only way to save her mother from her father is to get him caught in the act. So she plans to use her powers to get her father to have an outburst at his work. But Wes is more inclined to try and seek help from the school guidance councilor instead. Sadie refuses; any situation that could potentially end up in the courts could jeopardize her mother’s ability to stay in the country. Sadie decides that if Wes won’t aid in her plan, she’ll handle it by herself.

The issue alternates between the different perspectives of both protagonists. Wes eventually runs into the guidance councilor and enlists his help. Sadie, on the other hand, commences her plan. However, it gets off track and out of hand immediately. This culminates with Sadie’s father in perhaps his most aggressive state yet. This results in a confrontation with Sadie that causes her considerable emotional and physical pain.

#4 pushes forward directly into the conflict, and holds very little back in what it chooses to show or express. The latter half of the story is just one bad event after another. This just emphasizes the tonally somber ending of the previous issue. There is an increasing sense of hopelessness carried throughout, which culminates in a showdown between Sadie and her father. While not necessarily graphic, this leads to a rather surprising and striking injury for Sadie.

The issue also builds up tension very well by splitting the pair up and focusing on Wes first. The anticipation to get into Sadie’s story segment adds a lot of tension to the reading experience. The art still contains moments of kinetic action, but lacks some of the flow that made the previous issue unique. The colors also stay rather standard, unlike last issue’s more interesting contrasting color scheme. The faces are the highlight of the art; very expressive, especially in the many emotional moments of the issue.

Finger Guns #4 leads the story towards a pretty dour climax. It focuses much more on the main conflict of Sadie trying to stop her father’s domestic abuse. There is none of the moments of levity that the first three issues had. Instead, #4 separates the friends and leaves Sadie to fend for herself against the angriest version of her father. It does however, certainly set-up the next installment to be a very emotionally charged issue.

What did you think of Finger Guns #4? Have yet to read the series yet? If you’re curious, check out our review of #1 here, and you can purchase the rest of the series at Comixology. Sound off in the comments or send us your thoughts on Facebook or Twitter!