Home » “Frozen 2: The Manga” Shades The Film In A Whole New Color Spectrum 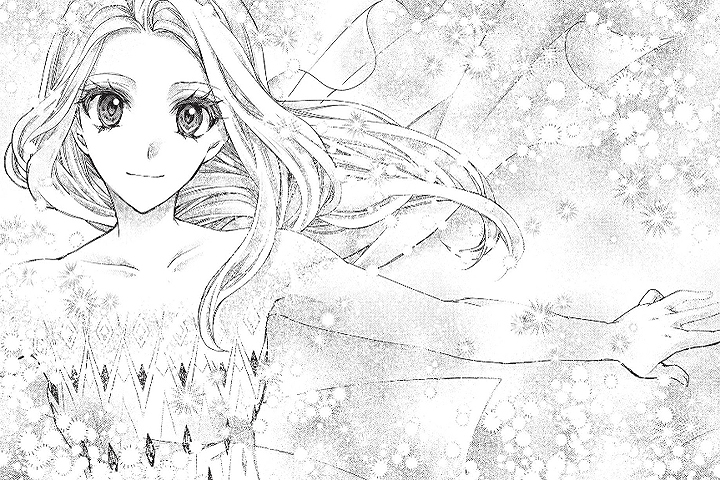 Some would say that the Frozen franchise is a cultural phenomenon. Two feature films; a collection of short films; spin-off books; an endless mountain of toys made in Elsa’s likeness. So, it’s not far-off to call Frozen as such. Frozen 2: The Manga is a re-adaptation of the sequel film; written and illustrated by renowned shoujo manga artist, Arina Tanemura. Tanemura shaped the childhood of millions of little girls who grew up with anime. Her signature staple is writing memorable female characters. Some of her most popular works include Phantom Thief Jeanne, Full Moon, and Gentlemen’s Alliance †.

Usually, one would either animate or make a live action film of a manga/comic/book. There would be a lot of questions on how to fit the bulk of the story into one feature film. Corners are cut; scenes are omitted; the pacing slows down to accommodate the changes that need to be made. That being said, Frozen 2: The Manga tries to do just the opposite. It’s condensing everything that happened in the film, to pages of panels, text, and art. While this has certainly been done before, this manga just doesn’t seem to work in terms of pacing.

Frozen 2: The Manga is fast and breathless, providing readers a lot of poorly transitioned whiplash. The scenes become more expository than they need to be. Even some of the ridiculous story directions taken in Frozen 2 – which already barely worked in the film – become overtly awkward in this format. The manga skims over major plot points which results in the consequences that follow after them coming off as weak and redundant. This takes away emotional significance and value. One particular event that suffers greatly from this is Olaf’s death.

Montages replace musical numbers. This is fine because it’s just a different form of expression which serves the same purpose; depicting the passage of time in a condensed sequence of events. Instead of lyrics, we have inner thoughts and musings. These typically mean the same things as what the songs are trying to convey. But these musical numbers are a form of storytelling device used by the film. They either provide information, or illustrate plot-important one-off moments.

Taking that away from Frozen 2 leaves only flashes of significant scenes and very minimalist text that don’t fully illustrate the inner conflicts detailed and outlined by the lyrics. This is problematic for several different reasons. First of all, the manga completely scraps an important form of storytelling used by the film. Second, it is then replaced with something insufficient in both providing information and forwarding the plot.

That said, the panels and Elsa’s perspective in Show Yourself heavily parallels with Anna in The Next Right Thing. One of the best parts of the manga format is how parallelism comes across. It’s abundant and discrete, and doesn’t feel overused. In Frozen 2: The Manga, not only does it add to the connection between the two sisters and the contrasting differences between them, the transition from Elsa finding out the truth of her grandfather and Anna losing Olaf serves as a well-timed juxtaposition.

The relationship between Elsa and Anna is actually more pronounced in some parts of the manga. They have a little more personality as individuals, even when they’re not on-screen together. Their own personal character arcs and developments feel more complete rather than one-sided; the film heavily favors Elsa’s development over Anna’s. This might be because the limitations imposed on the manga allowed Tanemura to provide a more balanced approach to the two sisters’ screen time. Rather than, prolonging Elsa’s scenes like the film does.

Tanemura has a very unique art style that crosses shoujo-typical character designs, to something a little more whimsical and distinctive. Sort of like Sailor Moon meets DN Angel. Her characters are therefore very easy to differentiate among each other. This makes her perfect for a manga adaptation of something like Frozen 2. However, some of the character designs are rough around the edges, with very little detail. In the films, Elsa and Anna are very similar looking save for the hair and the prominence of Anna’s freckles; the two characters are almost indistinguishable from each other in the manga.

Typical manga fashion uses the achromatic palette to find diverse and creative methods to express thought and action with just shading. For example, the intricate design of Elsa’s night gown in page 29. Playing with the black and white spectrum makes such details pop even more; a vibrant improvement over the solid fuchsia color seen in the film. It’s similar to the intricacies of the frosted flakes on Jack Frost’s hoodie in Rise of the Guardian.

On the underside, Frozen 2 in general is very lackluster in its story and characters. Therefore, its primary draw is the textured and detailed art. The art works in tandem with the neutral and dark, yet vibrant and outstanding use of color. There are moments within the manga that just doesn’t deliver that same kind of impact. However, there are pages that exhibit instances in which lack of color actually benefits the scenes. In page 77, the shading of this particular scene is just stunning. Well-detailed, the overall composition complements the dancing of musical notes that frame it.

Manga is also known for using small and chubby caricatures of the characters to add comedic effect. Of course, Frozen 2: The Manga has some of these moments as well. However, as cute as this “chibi” art style can be, in this particular instance, it takes away some of the emotional weight of the dialogue and trivializes them. They cut through intended tense atmosphere and make these particular scenes hold less significance. It even sometimes disrupts the comedic delivery of other scenes.

Probably one of the scenes done better in the manga is page 61. It’s more suited for the comic style layout. Even the use of the “chibi” style is remarkable here because it makes sense for Olaf’s character. Page 6 in particular, is also better-suited for the panel format. The split of big and small panels help keep focus on Agnarr’s closing eye. The text strip in black fading into one of the other panels creates an almost auditory effect of his voice slipping into unconsciousness. It again creates more parallelism, this time between Elsa and her father, and their experience with the sentient voice.

Overall, Frozen 2: The Manga is a charming readthrough of the films’ events. A little faster paced with less significant events, the manga is more fairy-like and mystical. There’s a lot of ups and downs, and reading it without the context of the film can be a little confusing. However, it’s still an adventure all the same—one I would gladly embark on a million other times.

Curious to see what Elsa and Anna would look like as manga characters? Or just in need of a quick recap of Frozen 2’s events? You can purchase Frozen 2: The Manga on VIZ’ official site. Let us know if you enjoy by commenting down below or sending us a tweet on Twitter!