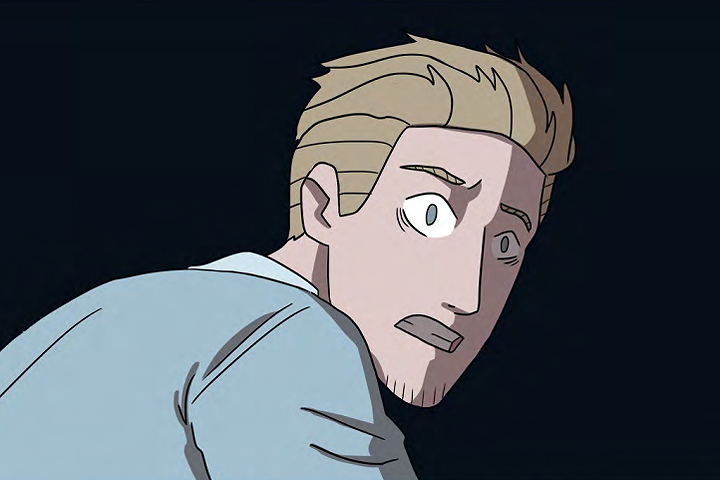 Like taking a behind-the-scenes sneak-peek into a supernatural podcast; Evil Cast satiates those looking for a Buzzfeed Unsolved spin-off in graphic novel format. It’s got that quick dry humor, dynamic banter between two hosts, and all the insufferable unsolved mysteries you could ever want—and then some. Written by Kyle Stück, with covers by Big Yoshi and Ryan Cody, drawn by Enrico Orlandi, and letters and edit by Noah Baslé; the first four issues of Evil Cast are hard to put down. It’s not a wonder at all that I consumed all of it in just one sitting.

In summary, #1 has one of our main characters, Kyle Robertson, experiencing varying degrees of bad dreams. He and his co-host Noah Leblanc talk all about it on their podcast ‘The Evil Cast’. This particular issue sets a good foundation for the rest of the series. It applies this sense of uncertainty, blurring the lines of reality and hyperbole. #2 begins with a hunt for who set Noah’s house on fire, which is an event from #1. This issue also covers a little more of Kyle’s spiritual escapades, and we meet Ruby Spears.

#3 opens from the last scene of the previous issue. A woman covered in flames stands before the men and confirms responsibility for the fire. She then proceeds to trap all three in Ruby’s house with a ring of fire. Meanwhile, Ruby provides some disturbing confessions that lead towards the fallout of #4. The last of the four finds the three men journeying through the tunnel underneath Ruby’s house. Some revelations come to light, such as Kyle being a medium, and the involvement of cults. There’s more destruction, and everything ends with the introduction of even more characters and further questions.

Each cover packs a punch; from the dark colors and detailed simplicity of #1, to the film poster-esque covers by Balsé. All of these capture the supernatural tone of Evil Cast well. They even incorporate the constant change of mood in the story. It has that same comedic charm through the presence of the cats. Then, it shifts to the edgier elements with heavy use of red, black, and detailed shadows of covers #3 and #4. The actual character designs are simple yet still distinctive. They blend into their backgrounds effortlessly. In fact, they blend in so well, they almost don’t standout and become part of it. It makes you appreciate them a little more at key moments when they do pop and standout.

The storytelling structure is great for creating and playing up tension, while also cutting through it. It fluctuates between stress-inducing supernatural aspects, before falling into a simple sort of mundanity between the characters, and then moving back into unrealistic yet plausible circumstances that distort your perception of reality. It’s that fine balance that a story like this needs to really set the right amount of anxiety. The cliff-hangers become more eye-catching; text maintain that thread of uncertainty; answers unknowingly stare you right in the face. It’s also a structure that holds your attention, so you’re constantly entertained.

Evil Cast uses context clues instead of abusing exposition. For example, during a transition from one scene to the next, Noah and Kyle are wearing headphones. They sit in front of two mics talking to each other. This gives the impression that they are recording a podcast for an audience, rather than talking amongst themselves. Furthermore, because of the dialogue, we already know that Kyle has issues with his mother. We see this through his verbal responses to Noah’s snide comments. It’s these simple little things – of the writer and artist subbing out telling readers what characters are doing, and instead showing them – that really makes the storytelling seamless.

The dialogue is very natural. I like the banter between Noah and Kyle. They feel more like people rather than just characters with roles to play. Often, most comics use too much of the text to over-expose the story, service the plot, or build the world. This method rarely leaves room to truly flesh characters out and their relationships. So, this is a nice change of pace. Furthermore, the dynamic between Kyle, Noah and Ruby is just enjoyable. The dry sarcasm between Kyle and Noah, and the witty remarks and comments they make amongst themselves, really compliment their love/hate relationship with Ruby.

Overall, the humor is all very thrilling and amusing; it’s the cut and dryness of it in the middle of key moments of tension. The characters’ reactions to all the supernatural events taking place are downplayed, but not in a lazy way. More like, the fine line between casual acceptance and overexaggerated disbelief. You can tell just from the dialogue how much fun the writer had in creating these characters.

The art uses hashes and solid color to add texture, such as shadows and difference in lighting. The solid colors help the text standout above the characters and backgrounds. This also creates a sense of impending darkness waiting to take over. This adds further to the tension without making the pages and panels too busy. There are nods to other disturbing images such as The Shining and Bible. Some of these scenes are coated in filters and over-immersive colors; from the dominance of red, black and dark blues, to warm and cool tones moving from page to page. Meanwhile, regular everyday pages are a lot more colorful and varied, with little to no actual filters used.

To conclude, I really do like Evil Cast. It’s just one of those hard-to-put down comics, with still a lot of potential and room to grow. These first four issues are fantastic so far. I cannot wait to see where Stück and the rest of the crew take it from here!

Would you like to know more about the impending danger in Evil Cast? You can take a look at #1 to #5 here if you’re interested in reading more. Don’t forget to let us know if you enjoy it by commenting down below or sending us a tweet at Twitter!