Home » Godzilla vs. Kong: What More Could You Want? 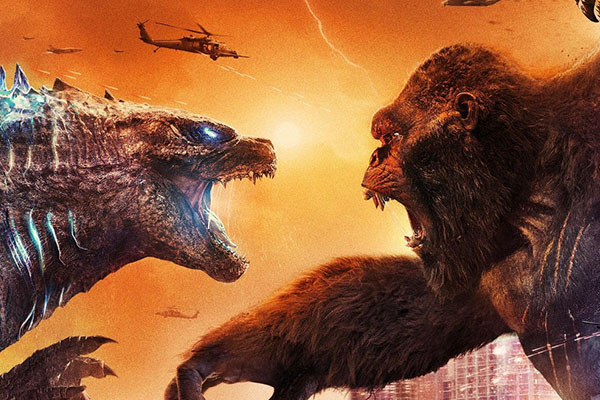 Godzilla vs. Kong, the latest Kaiju infested installment of the Monsterverse. A movie that asks a simple question: Who would win, a giant ape or a radioactive lizard? And the simple answer is; who cares? It looks awesome either way.

Fans of the franchise have been clamoring for this sequel since 2019’s Godzilla: King of the Monsters, which Kong was strangely absent from. Godzilla vs. Kong reveals that his absence was due to being trapped on Skull Island by Monarch Industries. However, as Godzilla has begun attacking cities a challenger must rise, and humanity’s best hope is Kong.

Or not. It’s obvious humanity is the reason why Godzilla is attacking in the first place. APEX cybernetics is using the remains of Ghidora to create a telepathically controlled Mecha-Godzilla. Godzilla is obviously not okay with this so he begins to wipe APEX facilities off the map one by one. The only missing piece for APEX is a power source strong enough to power their creation. So they convince scientist Nathan Lind (Alexander Skarsgard) and Ilene Andrews (Rebecca Hall) to use Kong as a living map to the Hollow Earth: the birthplace of the titans, and home to a massive life giving power source.

As the movie continues we get to witness a water battle between Kong and Godzilla. Which ends exactly as you would expect, with a nearly drowned monkey. Later on there is also a very impressive and visually stunning look into Hollow Earth, and the ancient civilization Kong hails from. Which eventually leads into round two (and three, if we are being generous) between Kong and Godzilla. Kong, now armed with his super axe made from the remains of Godzilla’s ancestors, does put up a mean fight. Yet eventually falls to Godzilla anyway. Godzilla reminds Kong that he is the king of earth and after a few massive plasma blasts, a broken arm and some broken ribs, Kong clearly loses.

Godzilla attempts to leave after leaving Kong to die, but Mecha-Godzilla arrives, now at full power and piloted by the consciousness of Ghidora, who is probably a bit mad about that whole being melted thing. Mecha-Godzilla begins to get the upper hand due to stronger laser blasts and advanced weaponry, and seems to have Godzilla on the ropes. However with some help from the humans again, Kong gets his heart re-started, he then sets his broken arm into place and goes to help Godzilla take on the actual threat to their dominion. The two kings begin to get an upper hand on the robot, and after Godzilla supercharges Kong’s axe, the battle is over, with Kong decimating the robot into pieces.

Godzilla and Kong now mutually respect each other, and Kong leaves to take the throne inside Hollow Earth, while Godzilla remains the ruler on land.

Overall the movie was exactly what one would expect from a Kaiju fight fest. The film was visually stunning and completely action-packed. Though this is not to say it was a perfect movie in the least. The human characters lacked any real involvement or direction. Not to mention the plot-hole ridden story. Holes like how Madison (Millie Bobby Brown) and her team continued to sneak into top-secret facilities unnoticed. Or how Godzilla seems to know that Ghidora’s remains are being experimented with. Or even why Monarch, the most wealthy company on the planet, doesn’t make a jacket for Kong. I know this probably shouldn’t have bothered me but I’m just saying, a tropical creature should not be submitted to the intense rain and cold that Kong was. Poor Kong handed losses the entire movie, they could have at least given him a coat.

Those faults aside the movie is great because it delivered on expectations. Sure there needed to be some actors in the movie. But people aren’t tuning in for the humans, and it seems the producers were well aware of this fact. For a movie like this, even the plot takes a back seat to the fights. And that’s what Kong vs. Godzilla does amazingly well. It delivers full in your face action as often as it possibly can. This film is memorable, not due to quotes or characters, but just due to how much fun it was to watch.

Did you enjoy that Godzilla won? Which fight was the best? Do you agree that Kong needed a coat?  Sound off in the comments or send us your thoughts on Twitter! #GiveKongAJacket