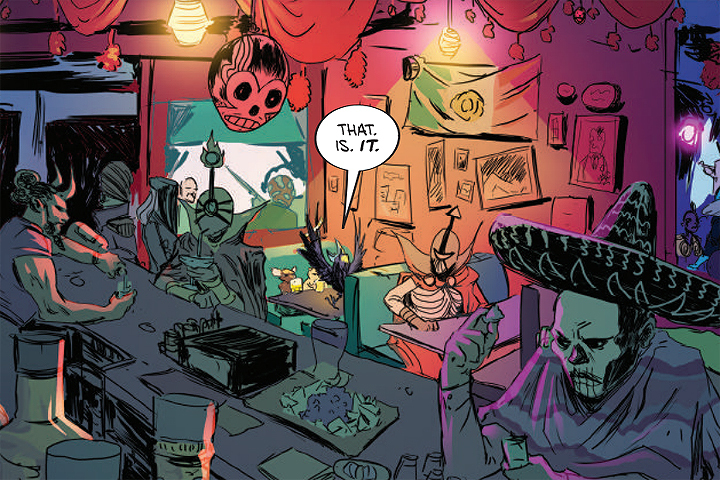 Robert Menegus and David Brame’s Necromancer Bill is an original take on the zombie trope. This amazingly fresh comic will surely have readers hooked after the first issue; of witty jokes, well-detailed illustrations, and an interesting cast of characters, to say the least. Bill – the balding, divorced, suburbanite main character – finds himself in a position of substantial power. He discovers he was mistakenly given the ability to control the undead and bend them to do his bidding. What happens after is a rollercoaster full of action, self-discovery, talking animals with substance abuse issues, and everything in between.

Brame does a phenomenal job with the illustrations. He adds an abundance of detail alongside a well-chosen color scheme. As a result, the intricate art style makes it easy for readers to submerge themselves in Bill’s fictional world. The backgrounds have as much detail as the centers of focus. This helps set the tone of comedy, fantasy and adventure all in one. Some of the panel borders change depending on the scene and sense of urgency in the plot. It’s these little things that I love the most. Because it tells me that the writer and artist have the readers’ total perspective in mind.

Necromancer Bill has one of the better supporting characters I have had the chance to read in a comic series so far. Larry is a talking, substance-abusing raven. After Bill is accidentally endowed with dead-raising powers, the Council of Necromancers sends Larry to prevent any catastrophic events from happening in the world of man until they find a way to correct their blunder.

Firstly, Larry is certainly not a flat character. In the beginning, he comes off as cynical and a jerk-off; he seems only interested in having fun and enjoying the good times with his friends. However, as the plot progresses, this initial impression subsides. Larry has the right amount of character development to not offset his witty, dark sense of humor. This allows the plot to advance without falling stagnant for a significant number of panels.

Overall, I enjoyed reading Necromancer Bill. For me, it’s a breath of fresh air and a change of pace. As you read, you’ll find a ton of hilarious moments that will surely crack a smile on your face.

Want to take a look at the misadventures of Necromancer Bill? You can purchase the first issue on Amazon now! Be sure to be on the lookout for the next installment of Necromancer Bill! Let us know in the comments what you think or send us your thoughts on Facebook or Twitter!