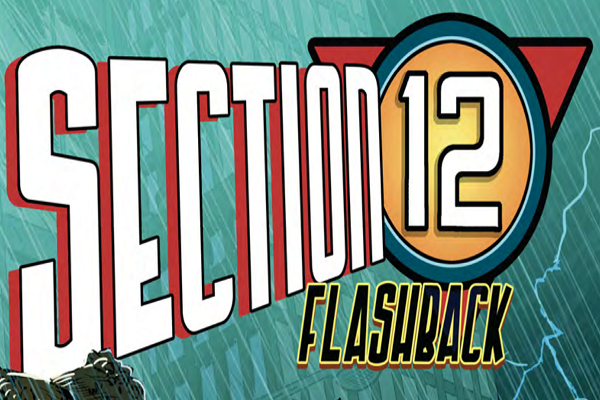 Government secrets, tears in the fabric of time, a group of misfit science experiments, and Ninja Plumbers; Section 12 (Flashback) #2 is a fun comic with interesting characters and a pleasing art style. It’s similar to X-Men in quite a few ways. The plotline is refreshing, told in the form of an extended flashback, hence the title. It’s a unique twist on a story that hasn’t been told in over two decades.

Section 12‘s premise is pretty straightforward. Section 12 is a government-run facility designed to hide scientific failures from the public. There’s an established team comprised of these experiments that seem to reluctantly work for the project. This issue introduces us to three of these team members: Miss Fire, Nite-fall, and our protagonist, Lt. Batterson. There’s also Tyler, the “resident genius” at Section 12, and one of the leading doctors on the team. There’s a bit of mystery surrounding him, but more on that later.

An outside laboratory’s experiment goes wrong and creates a tear in time. From this tear, we get dinosaurs and a knight in shining armor – our main villain for the time being. Section 12’s team of misfits are sent to deal with both. They’re explicitly told to try and bring back live samples. That doesn’t entirely happen, thanks to Batterson’s trouble with his new gun. The team does manage to secure the knight with little troubles. But that comes at the cost of Tyler’s life, who’s pronounced dead on arrival. And yet, he’s at the base when the team returns, welcoming them back as if nothing bad happened. Clones, anyone?

In terms of the characters, this issue explicitly reveals that these three team members have powers. Batterson’s powers are a lot more reserved than the other two’s. As of right now, he’s only confirmed to be immune to Nite-Fall’s fear-inducing pheromones. Miss Fire can channel electrical bursts primarily through physical contact, demonstrated in her fight with the medieval knight. Nite-Fall has the most drastic powers out of the bunch. He’s basically a brown version of Beast from the X-Men; a furry amalgamation of several animals that each give him heightened abilities. But he’s also only fourteen. His youth makes him and his situation all the more sympathetic. He has this childish excitability that the older, more mature members lack. We get most of his backstory in this issue. Frankly, I’m most excited to see how he develops across the series.

Tyler and Batterson have the most mysterious backstories and powers out of the bunch. As mentioned before, Tyler is incredibly intelligent and has a kind heart. But thanks to the ending, I’m almost 100% positive he’s a clone. Batterson, meanwhile, seems like the black sheep of the misfit team. He doesn’t have any notable physical powers aside from his immunity to Nite-Fall’s pheromones. Tyler refers to this as Batterson’s “condition” rather than a superpower. It makes me think that there’s more to Batterson than meets the eye, but we’ll have to wait and see.

I’d like to applaud the team behind Section 12 for returning to such a wonderful series. It’s clear how much love went into these characters and the world they’re in. Len Mihalovich, the creator of Section 12, even called this issue “the dinosaur story”. He hailed it as one of his favorite tales from the series. After nearly two decades, Section 12 is finally getting the glow-up it deserves. It’s amazing to see how far it has come since the 90s.

I like the art style and how sketchy yet clean everything looks. Colors bring the entire world to life; it’s easy to distinguish who is speaking based on the color of speech bubbles. The costumes definitely remind me of X-Men the most, since Miss Fire, Batterson and Nite-Fall all wear the exact same spandex suit. The unity is pretty ironic, considering how the characters have yet to really get to know each other. But that’s definitely something I’m looking forward to in the future!

Overall, Section 12 (Flashback) #2 is fun. Despite not having read the first issue, it still works well as a standalone; it doesn’t need any prior backstory to understand. I definitely recommend this to anyone who enjoys X-Men, The X-Files, or even Monsters vs. Aliens. This series has a lot of potential and I’m excited to see it reworked for the modern day.

Have you read Section 12 before? If so, what did you enjoy about it? If you haven’t, you can check Section 12 Flashback #2 out on the official Section 12 website and on IndyPlanet. Let us know in the comments or send us your thoughts on Facebook or Twitter!