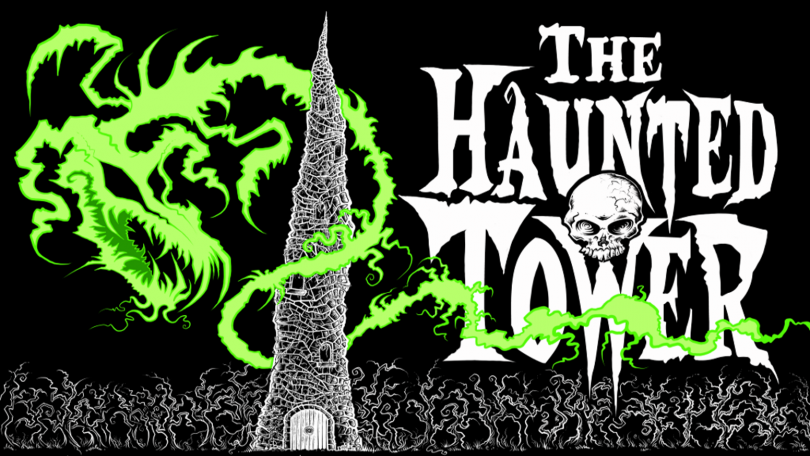 If you do decide to read The Haunted Tower, be prepared to flip through lot of pages. This choose-your-own-adventure style experience is Thane Benson’s most recent creation. It puts you as the reader in charge of the experience; you physically navigate from one cobweb-encrusted, monster-infested room to another, as you unravel the comic’s narrative. And ultimately, while some puzzles remain a tad repetitive at times, The Haunted Tower is a witty, visually creative romp.

The Haunted Tower opens with an adventuring knight. This is your player character, so to speak. Accompanied by a mechanic monkey, they roam through a bug-infested forest. Then—woosh!—a scraggly black vulture swoops up the friend, depositing them in an ominous, Rapunzel-esque tower in the distance. Despite warnings about the tower being cursed, the knight proceeds in determination. They want to rescue their simian friend from whatever dark forces lie within. Your mission: take control of the knight and investigate the secrets of the Haunted Tower.

This graphic novel is more puzzle book than choose-your-own-adventure story. While you have the ability to follow through any path, there’s ultimately a guide towards specific narratives. You can explore different rooms, pick up books, drawings, and other artifacts that drop hints about the tower’s magic. But there are—as far as I’m aware—no alternate endings. This sometimes gives The Haunted Tower the feeling of completing a video game level; exploring new worlds while solving puzzles in one area so you can move on to the next stage of the story.

The comic benefits immensely from its unique visual style, which almost feels reminiscent of old newspaper cartoons. The vivid—sometimes even neon—colors pop off each page, yet remain cohesive enough to stay consistent with the atmosphere. Each location is fantastically detailed; full of leering skulls, ominous green vines, and fuzzy creepy crawlies in every shade of the rainbow.

The character art is particularly dynamic. Your knight, for instance, is a far cry from the typical metallic clunkers seen in many comics and TV shows. They’re flexible and mobile, like a series of burnt marshmallows stuck together with some Twizzlers. I can imagine them doing handsprings and backbends as they tumble down the tower’s stone edifices. A bird-like beak, flamboyant plume, and creative posing; all of these things complete the quirky character design that perfectly fits the comic’s unique, cartoonish aesthetic.

The art goes a long way towards making the puzzles and tower exploration particularly engaging. For example, an ordinary maze sequence becomes a web of bulbous zapping jellyfish stingers set in a slime green sewer. That is not to say that the puzzles themselves are boring. On the contrary, I find myself absorbed while trying to disentangle codes, navigate through mazes, and look for ghosts.

But, like a videogame level you just can’t quite figure out yet, these puzzles do become repetitive after a certain point. Unless you have an amazing memory—and I don’t—you’ll find yourself coming back to the same rooms over and over, or falling into the same traps. Unfortunately, the mazes become far more frustrating once encountered five or six times in a short period of time.

Just as videogames have cutscenes between blocks of gameplay, The Haunted Tower has its own narrative chunks. In fact, the story beats are some of the most intriguing and amusing parts of the entire comic. Despite the name The Haunted Tower, the tower isn’t particularly ominous at all. And the comic is better off for it; Benson has a wicked sense of humor and a delightful ability to subvert typical fantasy tropes in fresh ways within his narrative.

This skill of his combines well with the lively visuals and the twisty-turvy plot. All of these come together to produce sequences and jokes that strike just the right balance between silly and bizarre. These story-specific moments, however, are a bit sparse in the ultimate scheme of the comic. The bulk of The Haunted Tower relies on its “gameplay”, so to speak. Which, although also suffused with a generous dose of visual humor, can often overwhelm the narrative.

At the comic’s climax, your knight stumbles into some dire trouble; a plot twist has just left them on the defensive against an antagonist. What will they do next; will they still manage to save the day? Unfortunately, an ill-placed series of five consecutive mazes, each with the same black-on-red aesthetic, grinds the pacing to a crawl. For me, times like these spur preference to a more sandbox choose-your-own-adventure approach to The Haunted Tower.

At the very least, there needs to be some more space to develop the story and characters. The wit and humor present is impeccable, and the plot manages to dance at the edge of cliché without falling into its pits. Perhaps a better integration of puzzle and narration; maybe a tad bit more exploration of the story and characters. In the grand scheme of things, these might have created a more balanced experience.

Regardless, I don’t want to sell The Haunted Tower short. This comic is undeniably fun, and a treat to look at. It immerses as I wander through the halls of the tower, eager to unravel the secrets of each new room; I laugh out loud multiple times at the jokes and unexpected turns; I feel a strange kinship with my bendy knight – spunkily and earnestly trying to rescue their friend, despite being plunked in slime, stung with jellyfish tentacles, chomped by spiders and hungry vines, and sent tumbling down all sorts of stairs, tunnels, ladders, and walls.

Ultimately, I’m excited to see if Benson continues to explore this imaginative world; fleshing out the characters and stories that fall short this time around.

Have you explored The Haunted Tower yet? Want to have a taste of this twisty-turvy adventure? If you missed its Kickstarter, you can checkout the Kickstarter for Benson’s new comic with the option to add on The Haunted Tower as a reward!. Sound off in the comments to let us know what you think!