Home » “Any Port in Storm” Teleports You To The Future, Where Teleporting Is Illegal (Unfortunately) 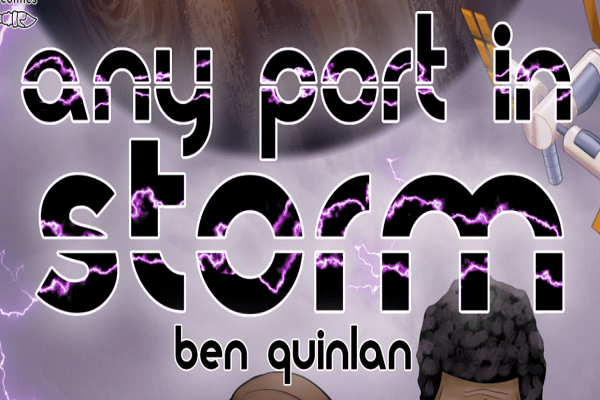 Teleportation is one of the coolest superpowers out there! Now imagine if you could teleport, but teleporting is actually illegal. Kinda takes the fun out of it, huh? Any Port In Storm explores a futuristic world where teleporting is illegal. We follow Tag, a tour guide who gives tours in Storm City; a former wonder of the world that was abandoned after the ban on teleportation. With her business failing, Tag and her friend Tihon work to save her home and uncover the conspiracies behind teleportation.

Any Port In Storm packs a whopping 88 pages of content in a self contained story. It’s written and drawn by Ben Quinlan, who hails from Sydney, Australia. According to the Kickstarter, this is a story he’s been working on for a very long time. Which is evident in how his art style changes over the course of the comic. I’ll talk more about that later, though!

Tag’s a tour guide giving tours in Storm City. The city itself is a shell of what it once was. It used to be a technological wonder, since it’s built between a collection of mountains. It’s known for the storms that plague it often. But now, it’s basically been abandoned. Gangsters and criminals teleport to Storm City often as a means of rebellion. There’s officers on the hunt for these teleporters, but they only succeed in stirring up violence. It’s not good business for Tag, who leads tour groups through the area. She’s struggling to make ends meet for both herself and her mother, who both live in Storm City.

There’s a reason teleporting is illegal, however. The device that allows people to teleport is highly dangerous and unpredictable. Because of the molecular breakdown that comes with teleporting, people fuse together during the process. It leaves mangled, mutated bodies on the streets of Storm City. But why is this happening? And why was a ban placed on teleporting, rather than a proposal to fix this problem?

The Art Style and The Worldbuilding

Any Port In Storm‘s art style is what I’d call unconventional. As I previously mentioned, I could tell how the style developed over time. I think it’s really charming seeing Quinlan’s improvement! I bet plenty of other artists would’ve gone back and redone the first few pages to maintain the consistent style. But this feels more genuine, similar to how you can see an art style develop over the course of a web comic. Also, the facial expressions are incredibly dynamic and entertaining! That’s definitely one of the hallmarks of Quinlan’s style.

As for the world itself, Quinlan’s built a very interesting system. Teleporting is illegal, of course, but why? Well, the short answer is simple: capitalism. Teleporting is a clean, environmentally friendly way to get around. It affects industries like public transportation, engineering, and automobiles, to name a few. And of course, those industries aren’t backing down without a fight. It grows increasingly clearer that capitalism is the true antagonist here, exactly like how it is in our own world. Some things never change, huh?

Overall, Any Port In Storm is a fascinating sci-fi tale the combines the horrors of capitalism, futuristic technology, and social outrage. All of the characters are compelling, especially Tag, and each has their own motive for restoring teleportation. There were some minor moments where I thought that Wald Wagner, the former senator and advocate for teleportation, overshadowed the other characters. I also wish that, despite his minimal role, we could’ve seen more of Tihon. He’s advertised as a title character on the Kickstarter, yet he doesn’t do a whole lot for the story.

All that aside, the storyline is equally coherent and entertaining. I kept thinking that this would make an excellent movie! I’d recommend this to any sci-fi fans looking for a touch of horror. Also, if you want to see capitalism destroyed in a fun and entertaining way, this comic’s for you. Seriously, that was satisfying.

Any Port In Storm‘s Kickstarter is available here. Check it out if you’d like to learn more about the author and the story! Funding the project means that the rest of the comic can be colored.

Did you back Any Port In Storm‘s Kickstarter? Are you excited to read it? Let us know in the comments or send us your thoughts on Twitter!