Home » Army of the Dead Review: Lots of Fun But Make Sure You Have Lots of Time 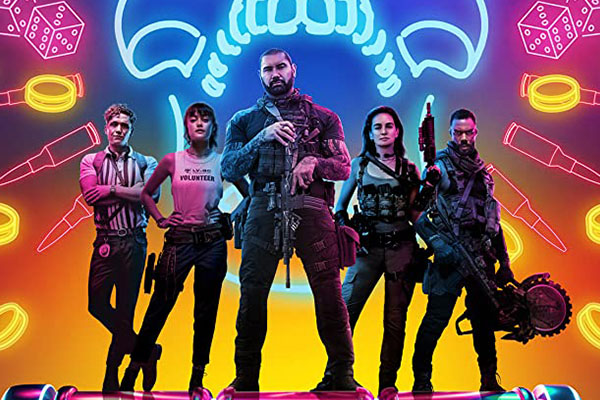 Film critics always act like they’re evaluating a film through some perfect lens of objectivity. They’re not. Even if they try to be. Stating the obvious here, but everyone is biased in their own way. And, even before viewing this film, I can tell every single one of my biases was going to work in favor of Zack Snyder‘s Army of the Dead. Because Zack Snyder directed one of my favorite zombie movies ever, Dawn of the Dead, and I’m also a fan of his work in general. Even though Sucker Punch was pretty bad. Also, Dave Bautista was my idol growing up as my favorite wrestler in the WWE.

Did I mention I LOVE zombie movies? Similar to shark movies, there’s something about being eaten alive that has always really freaked me out. So, the Dawn of the Dead remake that Zack Snyder directed was not only one of my favorite zombie movies ever, alongside Shaun of the Dead, but one of my favorite horror films ever. And along with the superhero genre, horror is probably my favorite or second favorite category of film. So Army of the Dead, which is in theaters and now on Netflix, had virtually everything working for it from my perspective going in. But with the great power that the film had over me, came great expectations.

After a payload container is accidentally opened during a crash, a zombie outbreak is unleashed on the city of Las Vegas. Cut off from the rest of the world, Las Vegas becomes overrun with the undead, as the US government plans to nuke the city within the next few days. Camps of people that managed to escape the carnage reside right outside the city, supervised by the military. Included in this group is former mercenary Scott Ward (Bautista) who was part of the military intervention that led to a full quarantine of the city.

Casino owner Bly Tanaka offers Ward a job: break into a vault at Bly’s Casino and retrieve $200 million before the military blows up the city. If Ward is successful, he gets $50 million of the share. Ward accepts and assembles a team to infiltrate the City of Sin. But little does he know, the zombies have evolved and one mistake by anyone on the team could seal all of their fates. This mission of course doesn’t go according to plan as each member has their own separate agenda, agendas which might require some sacrifices along the way.

How do I best describe this movie? Let’s call it Resident Evil gone right. Snyder creates his own Raccoon City in Las Vegas and expertly ties in a heist theme which makes this movie all the better. The one-sentence description of this film on Wikipedia was enough to sell me. And the film has some terrific action sequences and awesome gore which is essential for a zombie flick.  Army of the Dead earns its R-rating and features some awesome kills including a scene with a zombie tiger.

Snyder also throws in a really interesting element with there being different classes of zombies. It helps to create a set of rules Ward’s team has to abide by if they want to get out alive. The zombies may not be as scary as the ones from Dawn of the Dead, but that little creative element that Snyder ties in is effective and adds to the tension that the film builds towards. The characters are all pretty solid as well. Most of the performances were enjoyable and I love watching Dave Bautista continue to improve as an actor. I hope he gets more opportunities like this to be a leading man. And there’s an elevator music scene! A little easter egg that Snyder left from his Dawn of the Dead film.

The build-up to the mercenary team entering rundown Las Vegas is pretty compelling and, really, the first half of the film flies by. But there’s a point in the middle where the film just sort of stops and lags. And Army of the Dead has a 2:28 runtime. So the film’s length is a bit of an issue. Additionally, while some of the team Ward assembles are pretty cool, there are a few that just do not work. For instance, there’s one character with a high pitched scream whenever a zombie shows up. It’s played for laughs but it gets annoying pretty quickly, to the point where I’m waiting for him to die as gruesomely as possible. And he’s one of the good guys.

Also, the drama is okay in this film, particularly the family drama between Ward and his estranged daughter Kate. But this relationship doesn’t add much to the film’s stakes or tension. It’s not anything bad, it’s just kind of there. Overall, this ragtag mercenary team definitely pales from the characters in Snyder’s Dawn of the Dead. You couldn’t get more badass than Ving Rhames in that film or as sarcastically amusing as Ty Burrell. These aren’t huge critiques of the film, just some elements that could have been cleaned up, and would have elevated Army of the Dead to the same level of what I consider to be a classic.

Army of the Dead is definitely the kind of film to return to theaters for. Of course, if you’re comfortable doing that. It gives the viewer exactly what they’re looking for. And even ties in some interesting themes regarding class oppression while feeling very much escapist with its video-game feel. Despite my very high expectations, I had a lot of fun with this movie. And you will too. It drags on a bit but no harm no foul. So, if you want to watch a zombie heist film overseen by a director who returns to the subgenre that made him a household name, check out Army of the Dead. Good to have you back in the zombie genre Zack!

What did you think of Army of the Dead? Do you like Zack Snyder better as a superhero movie director or a zombie film director? Sound off in the comments or send us your thoughts on Twitter!