Home » Auld Reekie: Why Edinburgh Is a Compelling Double for Gotham City 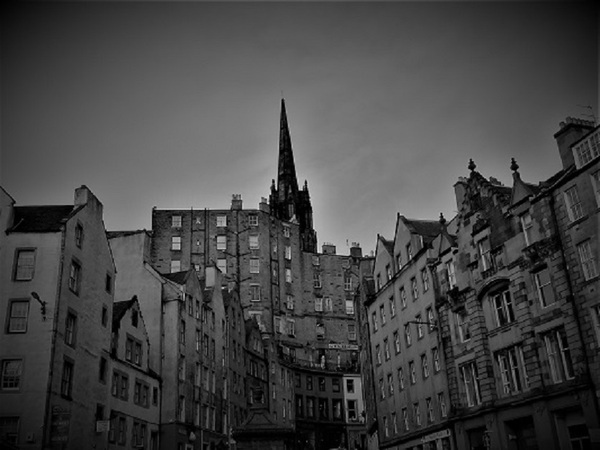 On early wintery mornings, I always found myself mindlessly strolling where the snow laid thicker. I have to say, even in the cold and sharp edging winds that cut their way through my best coat, I enjoyed the solitude of those walks. Awake, I plunged into the darkest hours. I loved to play with my thoughts and the silhouettes of the streetlamps: how weak were their beams, sucked into the infinite nothingness of the surrounding darkness. A certain ambiguity about them charmed me and so did the turbid back alleys. Apart from some stray dogs, perhaps a cat or two, there was nobody else around there in the Cowgate. Once, however, to conquer the monotony, I felt compelled to follow a different route. Something happened then; I can still see the memory vividly haunting my mind. It was shortly after the clock struck a quarter past three: someone had been thrown off a roof!

Tall tales, intertwined with real events, have always found the perfect stage here in Edinburgh. Allow me to tell you a bit more about this city.

Edinburgh is a foggy town in Winter, the most suggestive of seasons here. Some still call this city Auld Reekie, a moniker that has stuck with it, especially with the old town. By the end of the 16th Century Edinburgh had grown exponentially. Local authorities had to come up with solutions to accommodate its citizens in the restricted space of a walled city. They increased the height of the existing buildings. However, the new order swept the less fortunate off the crowded streets and crammed them inside high towers. The poorly controlled sanitary conditions, combined with the presence of polluting chimneys, produced thick, black smoke that candidly fell back down onto the city. Indeed, Auld Reekie means Old Smokey.

One of the most famous neighbourhoods in Edinburgh is the Cowgate. If you take a stroll along this long, narrow street, you will notice an abundance of Gothic buildings all around. You will also notice that they are quite tall, their roofs standing out against the city skyline.

Social unrest turned this city into a dark tale within its own brilliant history. Edinburgh was a divided city. Indeed, subsequent plans for the new town were set in motion. However, certain things were not forgotten. In fact, the city retained its dual nature.

Such ambiguity can also be found in all great superhero stories, starting with the Caped Crusader. The old town, emblematically, turned into a staple of Gothic literature. Locations became as important as the characters that made imagery a living thing. A monstrosity. Like the Penguin Oswald Cobblepot. Perhaps, the abundance of the Gothic in Edinburgh would suffice to stimulate the fantasy of creative minds akin to Tim Burton.

Bruce Wayne, for example, is pervaded by two opposite forces that are engaged in strenuous, inner conflicts: the rich, tormented, orphan billionaire turns into Batman: a dark, sinister entity; one that is, however and unlike his fin-handed enemy, a symbol of justice and hope.

Indeed, Edinburgh’s old buildings are silent witnesses of wild, obscure events that found their way into the tales of Robert Louis Stevenson, where good and bad, light and dark coexisted. A split nature. In the old town, walk a bit further away from the Cowgate and take the streets that lead to Greyfriars Kirkyard. Among the old tombstones, your mind might drift to that scene in Batman Returns, where the Penguin visits his deceased parents: “I forgive them” he exclaims in favour of the adoring crowd and the press. Human nature is complex, yet beautiful. There’s darkness even under a few sunny spells. That is the charming nature of Edinburgh too, or Gotham City as it can now be nicknamed.

This June, Edinburgh will be the stage for the upcoming The Flash movie. The city will double for Gotham, with some filming also taking place in Glasgow. In this twelfth chapter of the DC Extended Universe, Barry Allen (Flash) travels back in time to prevent his mother’s murder, a decision that would alter the normal chain of events. As the film draws inspiration from the crossover story Flashpoint, there is reason to believe that the relationship between Allen and Wayne is the emotional highlight of this new cinematic experience.

The impact the two main characters have on each other is essential to understand the connections between traumatic events (the loss of one or both parents to the hand of murderers) and the locations in which such events take place. Moreover, Andy Muschietti’s directorial choices might prove an evident nod to all those fans who loved Tim Burton’s hallmark in Batman and Batman Returns. This may go beyond plot devices and stylistic choices since Michael Keaton will reprise the role for which he is most recognised. He will play an older version of Wayne, whereas Ben Affleck incarnates the young version of the socialite.

The Flash, after a long and winding production, should hit the big screens at the end of 2022. Will you be inspired to visit this incarnation of Gotham once you watch the film? Let us know in the comments or send us your thoughts on Twitter!