Home » “H.P. Lovecraft’s Beauty And The Beast” Isn’t Exactly A Tale As Old As Time 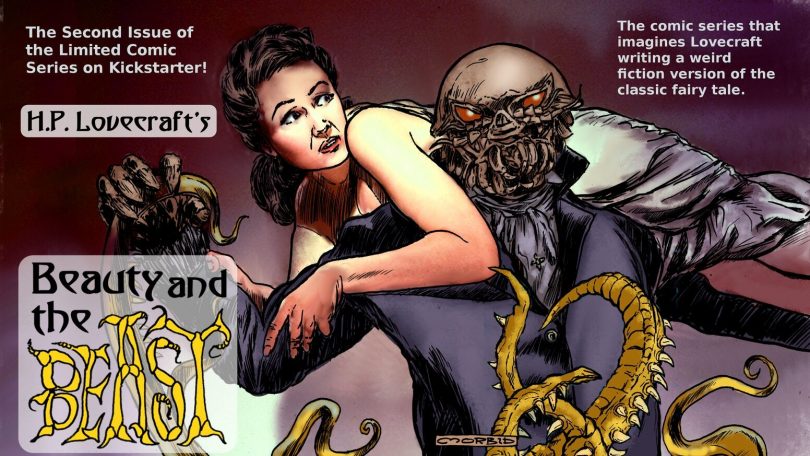 Who would have thought that H.P. Lovecraft actually once wrote his own adaptation of Beauty and the Beast? Well, as a matter of fact, Trevor Markwart knew. So, he did what any sane person would do—create a comic with it! Forget what you learned from Disney, because here comes the deeper, darker, and more true-to-the-original tale.

#1 prefaces a thrilling tale about Lovecraft. It recounts his rejected manuscript for Beauty and the Beast by a New York publisher. Certainly, it is quite a shame this story is fictional. How brilliant would it be to learn that Lovecraft was asked to create an “adults only” version of the fairy tale! However, Markwart is so convincing in this set-up that it took some research to find out the truth. It could very easily pass for a credible piece of literary history.

The four-part series explores the world of Omorphia; an orphan college girl riddled with dreams of a time long forgotten. An archaeology student at the Miskatonic University, her dreams merge with her waking hours. Thus leading her to discoveries of witch trials and buried statuettes of the forgotten God: Cthulu. With #3 on the horizon, Omorphia’s story so far shrouds itself in mystery. Questions arise, such as why she feels connected to the places and people in her dreams, or even to the remains of witches.

Mystery only deepens when the red-eyed man – known as “the beast” and thought to be a veteran soldier – calls for Omorphia to work by his side at his manor. The invitation tempts an exchange of a hefty payment to the university’s archaeology department. But even as she willingly accepts, she remains apprehensive at the sight of the manor and its staircases. Her visions only become more vivid and she becomes unsure of how to feel.

The first two issues portray a classic contrast of colours between real life and the visions. That is to say, it quite certainly induces a psychedelic atmosphere. The washed-out colours seem to reflect Omorphia’s life as an unknown; an unpopular girl at college. Meanwhile, the vibrant purples, reds and yellows, highlight the strange surrealism of Cthulu’s world. Splashes of red splatter the gory scenes whilst the slithers of pink and purple ooze with fantastical power.

Markwart really encapsulates the fantastical nature of the story with his infusions of colour; drawing the eye to notable moments in the plot. Omorphia’s  mentality and inner conflict shine through the crafted facial expressions in close ups. That, and the change in colour, as brightness becomes all the more consuming. Perhaps she is losing her grip on reality? Perhaps she is falling victim to Cthulu’s powers? Only further issues will reveal the true nature of the connection to her visions.

The comic not only depicts her choice to aid “the beast”. But it also explores the long forgotten conflict between ancient races, and one race taking a stand against said beast. Which side will prevail? Who will come to the rescue? Stories yet untangled lay in wait for the rest of the series to come!

Do you already own #1 and #2? Fancy grabbing #3 of H.P. Lovecraft’s Beauty and the Beast? Support Trevor Markwart and the reimagination of a classis tale here. Sound off in the comments or send us your thoughts on Facebook or Twitter!