Home » “Drops” Follows The Horrors Of Human Experimentation And Its Consequences 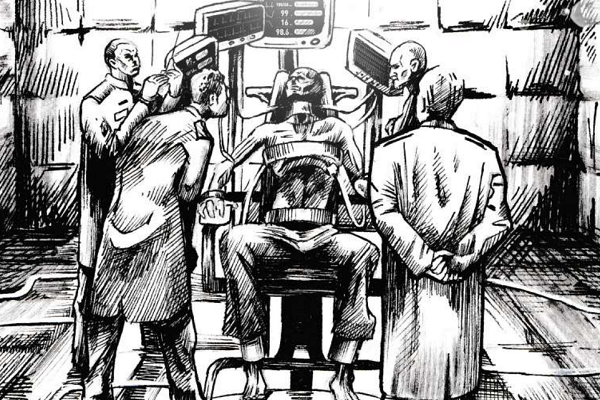 Doctor, doctor! The patient has escaped! But maybe it’s for the best since our experiments are unethical and lead to death a lot of the time. That’s the premise of Drops, a psychological horror comic written by Matthew Cooper. Coming in at twenty pages, it’s a fast-paced story with minimal dialogue and an emphasis on the artwork. It’s also the first issue in a three-part series, so the story is far from over and leaves many potential questions for the future.

So what is Drops about? The premise is fairly simple. A laboratory is performing experiments on humans, and those experiments usually end with the patient’s death. However, one man survives and manages to escape the facility. Throughout the comic, we get glimpses into his insanity and how the facility operates. The staff appears mostly human, but some appear as dogs. It’s more fitting to call them animals, considering what they’re doing.

As the nameless man makes his escape, strange hallucinations follow him. The walls grow teeth and mouths; the man falls into an endless abyss, jarred body parts speak to him. Though he manages to leave the facility, it’s clear the visions are only just beginning. It’s unclear what the source of the hallucinations is, however. I want to believe it’s the nameless man’s insanity, but some parts suggest that survivor’s guilt might be at play. He sees the reflection of another man early on in his journey, possibly an old friend. And the body parts scream for help, though there’s nothing the nameless man can do to save them. There’s also a haunting panel where the nameless man’s head is filled with other people like him- victims of the experiments, most likely. And he’ll always have to carry their memories with him, as well as his own.

The Art Style and Its Impact

Drops really shines in its art style. Connor Montgomery created all of the art, and frankly, it’s one of my favorite styles I’ve seen! There’s a sketchiness to the lines that’s reminiscent of pencil or pen scribbles. It lends itself nicely to the spooky atmosphere. The art also amplifies the sense of urgency and eeriness of the laboratory. Nothing is perfectly polished, but it doesn’t have to be. It almost acts like a mirror to our main protagonist’s mental state.  Also, the fact that everything is in black and white adds a layer of spookiness. I don’t think adding color would’ve done this comic justice. The lack of color implies a lack of life and beauty, and so the monochrome accentuates how lifeless and inhumane the facility is.

Of course, since Drops is a psychological horror story, there’s a fair amount of blood and guts. Whenever there’s blood in a panel, it tends to fly out of the margins, staining the pages. There’s definitely more focus on the art and action sequences rather than characters and dialogue, so we don’t know much about any of the characters involved. We also don’t get a lot about the outside world. Doing any of these things would’ve been a disservice to Drops or at least a disservice to this first issue. In a way, we’re supposed to believe the facility is the world, and though there exists a world outside its walls, we’re not supposed to see it.

Overall, I loved Drops! Admittedly, I don’t take in enough horror media, so this was a wonderful change of pace. It’s short and fast-paced, so it makes for a good, quick read. I’m really excited for the second issue and seeing what happens to our nameless man. Also, what exactly is the facility? What are they testing, and how far will they go to recover their escaped patient? I suppose we’ll have to wait and see!

You can find Drops’ first issue on Kickstarter here! Though it’s a short comic, it’s absolutely worth the read. Just make sure you’re ready for the blood, guts, and death. Also, keep an eye out for any dog-headed scientists. That should go without saying, but they’re evil.

Are you excited for Drops? Are you going to back the Kickstarter? What do you think will happen in the second issue? Let us know in the comments, or send us your thoughts on Twitter!