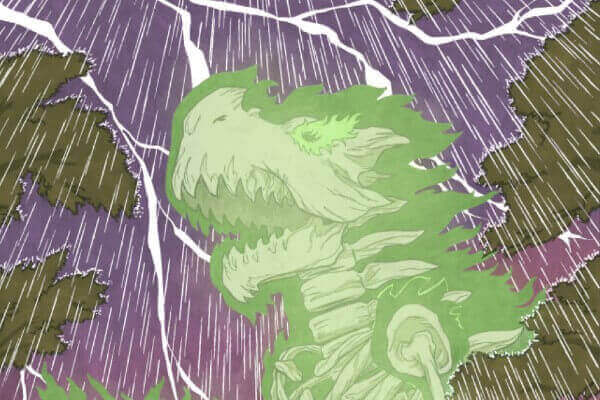 The Twenty-first century hurtles into the prehistoric era as Zeph; a boy ripped away from the present day, is pulled back to the past in Sinavore. After falling from home comforts, he meets a timid dinosaur which he initially lovingly names Dee. Together they cower from the prying eyes of Sina, a skeletal T-Rex, as they try to concoct a plan to defeat the tyrant and no longer live in fear. With only ten days left of the Kickstarter campaign, we caught up with creator Joshua Spiller to talk about all things dinosaur.

A Place to Hang Your Cape: What is Sinavore all about?
Joshua Spiller: Sinavore is about a boy named Zeph who falls through a mysterious rip in time. He tumbles from his own modern-day era, in Spain, back into the late Jurassic (so about 150 million years ago, for those who don’t spend their mortal moments swotting up on dinosaur chronology).

At the same moment as Zeph enters this time period, a strange, green-glowing meteor is streaking towards this particular patch of prehistoric Earth. Dinosaurs are fleeing in unspeakable terror (admittedly, for them – at least at this point in the narrative – nigh-on everything is unspeakable. That’s just early evolution for you. Don’t hate them for being who they are.) One T-Rex is struck through the head by the meteor, and – as you can see on the Kickstarter page – goes through a tremendous transformation. Another dinosaur, traumatised for reasons we don’t yet know, flees into Zeph’s arms.

The rest of the story is about how Zeph learns to survive in this mesmerising, riddled-with-dangers epoch; about what traumatised that dinosaur, whose name is Ovi, and how Ovi manages to overcome his fear. Or at least take the first significant step on that path. How the transformed T-Rex becomes a tyrant of the land, with Zeph and Ovi having to use their wits and good ol’-fashioned pluck to defeat him. That, in a nutshell, is what issue one of Sinavore is all about, and although I’d certainly like the title to become an ongoing series, this first issue is nonetheless designed to work as a satisfying, self-contained story.

AP2HYC: What inspired you to write about this specific storyline?
JS: I in fact began this story with an artist other than Richard J Waugh; Richard now holding the legendary position of being the artist on Sinavore today. This original artist and I were coming up with an all-ages pitch for a comic-book company. I asked the artist if there was anything which he would like to draw, which I could build the story around. He said there were three possibilities, showed me the relevant pages from his portfolio. Of these, the dinosaur-centric sequential art appealed to me the most. Blithe to the vicissitudes of reality, we smiled at each other across the medium of our email exchange, knowing full well that we’d just struck literary-visual gold, and all our problems were soon going to be things of the past.

Then – and brace yourself for the ultimate cliché of our times – Covid struck. The artist’s income, very sadly, was hit, and he wasn’t sure if he could continue doing comics at all. He certainly couldn’t continue the Sinavore project, but he gave me his blessing to continue it with another artist. I found Richard, and Richard designed everything from the ground up; to make the strip, on a visual level, his own, and did a stellar job. The pitch was unfortunately rejected but, still full of the faith of the deranged zealot, we decided to push ahead with Sinavore and see if crowdfunding might be the way for us to realise this story we’d become so invested in.

And that is the tale of how this specific storyline, its core creative team, and this Kickstarter came to be. Lastly, it’s worth saying that the original artist’s drawings only provided a few, sketchily conceived seeds of the finished narrative; the idea of a mystic-seeming meteor and a human from this era who gains special powers by having a shard of this meteor. The vast majority of the final story is, for better or worse, my invention.

AP2HYC: What themes run through the comic?
JS: A bit of me likes to leave it to the audience to decide what themes run through a story. Different people, and different eras, have different interpretations of the same story. I think part of the richness of reading is leaving it to the audience to make up their own minds about such things. However, in stark and immediate betrayal of what I’ve just said, I will now name a couple of themes that I think most would agree are woven pretty tightly into this story: friendship; the importance of having somewhere you can call home; the ugliness of bullying, and its heart wrenching effects upon those who suffer it; and overcoming adversity through courage and smart thinking.

AP2HYC: What style of art would you say the comic has? And why did you want to give it that style?
JS: I would say that the comic has a dynamic, very immediate and immersive art style, which conveys the awe-inspiring scale and grandeur of this particular drama very well. I believe this complements the story superbly because: a) as a story with an exotic, fabulous setting, we want the reader to get lost in our semi-fictional, semi-historical world. And b) the story is in an action-adventure mould, so it’s vital that the art conveys the kind of propulsive energy and thrilling spectacle that
motivated me to write the story in the first place.

I should also give a special shout-out to our colourist, Owen Watts. His contribution, in my opinion, elevates the art up to another level; bringing a distinctiveness, stylishness, and arresting quality to it that makes it pop even more. Plus, his sultry, somewhat psychedelic hues help convey the steamy, outlandish ambience of an almost otherworldly land. Don’t leave home without ’em.

AP2HYC: How does this compare with your previous work?
JS: It’s a bit similar to a previous 21-page self-contained story I did called Time Fracture!, in that both feature time-travel as an essential part of the plot. It’s got a faint affinity with another 21-pager I penned called The Ogxcun Myth, in that both are set in an estranging, and more “primitive”, past era.

But otherwise, I’d say Sinavore – with its prehistory setting; its narrative consciously designed to work for both adults and children; its construction from the get-go to be able to spin out into an ongoing series, etc – is its own beast. Issue 1 is also the first non-serialised, full-length comic-book story I’ve scripted. So if the plan works, will be realised as a hold-it-in-your-hands printed comic. The previous full length comic-book stories I’ve written have been serialised at three pages per week, which influenced how I plotted them; and they only existed in digital form. I’m very proud of them, and if you’re interested, you can see a couple of them here.

AP2HYC: Where does Sinavore go from here? Is it a standalone or should we expect to see more dinosaurs?
JS: If Issue 1 is funded, I will definitely write the script for Issue 2; the Sinavore creative team will complete the first five pages of that story; after which, we’ll run another Kickstarter to raise the funds for that comic. With hopefully enough of our Issue 1 audience – and a smorgasbord of honourable new arrivals – wanting to see the series unfold further, it could happen. Then, on and on, as long as our collective creative stamina holds, in the great circle of life.

AP2HYC: What’s next for you and the world of comics?
JS: Destitution. But I’ve always been a terrible clairvoyant.

Sinavora is only £2, including UK postage, though it also ships worldwide! The Kickstarter campaign is currently active and will end on August 28th, so be sure to check it out. If you like what you see, you can also find Joshua Spiller on Twitter and Instagram to explore his creative mind.