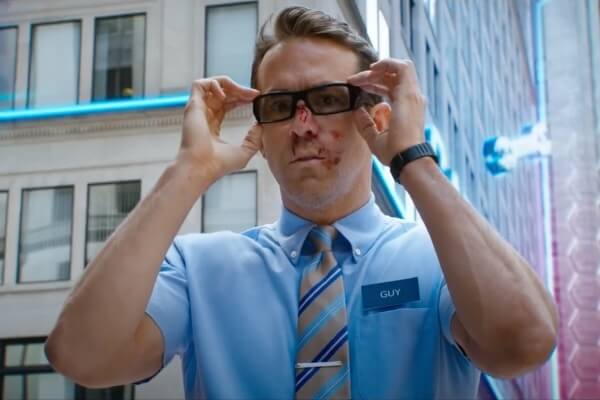 Despite all of its marketing, as well as my affection for both Ryan Reynolds and video games, I really didn’t expect very much from Shawn Levy’s Free Guy. Video game movies, whether they be adaptations of a game or even just a film about video games, have not had the greatest cinematic track record. I was ready for a decent action comedy with a standard “be yourself” message and a lot of jokes at the expense of video games and those who play them, but not much more.

Maybe it was the fact that I hadn’t seen a movie in theaters in over a year, but I found Free Guy to be everything I could want in a blockbuster feature, let alone a video game movie. Full of genuine laughs, off-the-walls action, and a surprising amount of heart, Free Guy was the feel-good mood-booster I needed at the end of this summer. And I think it’s one that we all need.

Guy, played by Reynolds, is a simple NPC (non-player character) in the virtual video game world of Free City. A clear reference to the infamous yet beloved Grand Theft Auto series, along with some allusions to popular battle royale games such as Fortnite, players are free to wreak violent havoc among the city and its denizens. Guy is content to live his happy and repetitive life as a banker NPC with his security guard best friend, Buddy (Lil Rel Howry), until he meets a player by the username of “Molotov Girl” (played by Jodie Comer). Driven by a quest for love, Guy decides to be the hero of the game rather than a passive background character. He teams up with Molotov Girl, aka Millie in the real world, to battle against the villainous game developer Antoine, a hilarious man-child billionaire played by Taika Waititi.

Reynolds is really in his element as the character of Guy, exuding charisma and playing off every other character, all while clearly having a blast himself. He captures just the right amount of naivete and cynicism you might expect of a self-aware video game character. It is really enthralling to watch him develop over the course of the film as he learns more about the world he’s in and how to take control of his own “life”. Comer very nearly steals the show, however, almost playing two characters as she jumps between her violent and sarcastic in-game avatar and her real self, a down-to-earth and passionate indie game developer.

Also great in the film is Joe Keery’s character Keys, a former indie developer-turned-game coder for Free City. Both he and Guy have compelling relationships with Millie/Molotov; while Molotov helps show Guy that he can be more, Keys has a complicated past with Millie (his former developer partner) that has left the two of them at odds.

Free Guy’s premise is silly – the film knows this, and thusly never takes itself too seriously. The film is packed wall to wall with clever jokes and visual gags that take full advantage of the cartoonish chaos and violence that happen in video games, as anyone who has played GTA is sure to be familiar with. However, it smartly keeps the film grounded by allowing us to see part of the story unfold in the real world as well. Surprisingly, the movie spends more time of the virtual world Free City and I think its better for that. Despite the ridiculous premise of an NPC coming to life, it is actually adequately justified by the plot of the movie somewhat. This allows it to explore deeper and more interesting concepts about free will and artificial intelligence than one might expect.

What surprised me most about Free Guy is that underneath all of the crazy action and cheeky references is an important story that has actual relevance to the real world. The core struggle of this film is about an indie game studio locked in a nigh-unwinnable legal battle with Spoonami; the AAA game studio that stole their content and developed Free City. So much game-related news in recent months and years has brought to light a lot of serious problems in the video game industry, with controversy surrounding how these studios treat their employees and their customers. It was a pleasant surprise to see this movie (which is also produced by a major studio) shine a light on some of the problems in the industry as a central part of its conflict. Beyond being a corporate critique, it uses this as a vessel to create character motivations and relationships that I actually cared about in the end. The film has a lot of heart, and it deserves credit for that.

It is clear that the film was worked on by a lot of people who genuinely love video games. There are tons of references, homages, and full-on cameos of troves of video game weapons, vehicles, and concepts. Popular YouTube and Twitch streamers make cameos, and use of GTA-like camera angles and graphical recreations of scenes in the movie that make the game feel like it could be a real game. All of this comes together to make an experience that, put simply, is just really fun.  I would absolutely give Free Guy a shot. Whether you love video games or just want to see some quality action and humor, you’ll find it’s well worth your time.

Have you seen Free Guy yet? What did you think? And if you could talk to one video game NPC, who would it be? Sound off in the comments or send us your thoughts on Facebook or Twitter!