Home » The Box #1: A Cinematic Display of Mystery, Action and Adventure 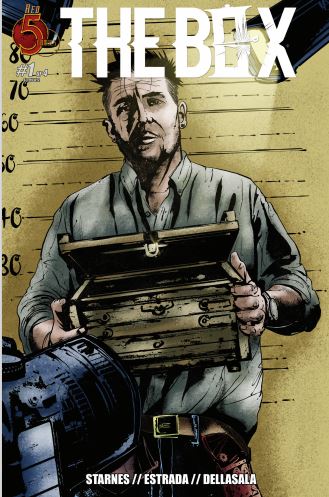 “Why don’t you stop messing around, Bloom?”

Right from the onset, the antihero main character of this new series finds himself in hot water right. His name is Leo Bloom and, fittingly within the classic American hardboiled genre, he is a private detective. His “partner” is a box. In this enticing story by Joshua Starnes, mystery grabs the readers by the neck. It doesn’t loosen its grip for the whole length of The Box #1.

It all begins with a lecture at Columbia University. Professor James Pederson (an anthropologist) gives a lesson about boxes; specifically their symbolism across various civilisations and their representation in mythology. The Professor, for example, mentions the Greek myth of Pandora’s Box. Once the lecture is over, readers will immediately notice how distrusting of others the professor is. What is he up to? The plot thickens. Despite his reserved nature, we see him getting into a car. Only us as the readers find out how dangerous things are in Pederson’s “real world,” as he puts it. The professor gets abducted.

Enter Leo Bloom: a typically straightforward and slightly cocky private detective. During a visit to jail, while talking to Claire, the police come in to collect him. This informal chat for him share what he knows immediately stirs up trouble for him. The officers suspect that PI Bloom might know a thing or two about the missing lecturer. That, and his penchant for poking his nose into boxes. Keep in mind, we’re still in the early pages of the story. The tension drips salaciously from every single panel.

Leo Bloom investigates with the assistance of his box, which works upon request (usually). Sometimes, it makes decisions of its own causing situations to escalate. This is something you’ll find in a thrilling scene of paranormal clash between good and evil. At this stage, however, it is too early to establish which is which. What does Leo Bloom know? Why are the police interested in him? Why has a timid academic been abducted? Since there are also a few ugly mugs from the organised crime scene, what is their role in all of this? If you happen to ask these questions, it’s because the story has lured you into a narrative not only packed with mystery, but also action. Lots of it.

Mythology and boxes have crossed the centuries side by side. They are captivating make for great storytelling devices. For example, in this story Starnes presents readers and those who have a certain flair for action and mystery novels with a cinematic experience in the form of comics series; at one point, Professor Pederson mentions the Ark of the Covenant. Readers who are familiar with films of the 1980’s will very likely make a connection with the first instalment of Indiana Jones, Raiders of the Lost Ark. Directed by Steven Spielberg, takes inspiration from a story by George Lucas. Those intrigued by the connection will then find Red 5 Comics, the publisher behind The Box. They will then find that Paul Ens, former director of Lucasfilm’s Lucas Online, founded Red 5 Comics .

Joshua Starnes, one would imagine, may be an aficionado of the cult films of that period; perhaps his artistic output stem from the grandeur of epic adventures, like those of Indiana Jones. It’s also possible his inclusion of the Ark myth in this adventure represents an homage. Furthermore, the art and colour creators (Raymond Estrada and Steven Dellasalla respectively) give the series a realistic feel. These enhance the idea that readers will enjoy the experience. Thanks to hues of ochre, silver and blue, along with marked contrasts between light and dark, shadows or lack thereof that run throughout the panels, the reading flows naturally. Ultimately, the creators have conceived the panels with a variety, and good balance, of shots. From long, medium, to close ups, as well as POVs, high angles, Dutch angles and various others. This helps perpetuate the relationship with films.

In conclusion, the story clearly benefits from all these artistic choices. Readers may finish this first issue in just one sitting, immersed, piquing interests for the contents of The Box #2. What next then? We will certainly find out in the upcoming issues.

If action, adventure and mystery is what you are looking for, The Box will satisfy your curiosity. You can purchase the first issue here. If you have been intrigued by the mystery, don’t hesitate to let us know in the comments or send us your thoughts on Facebook or Twitter!