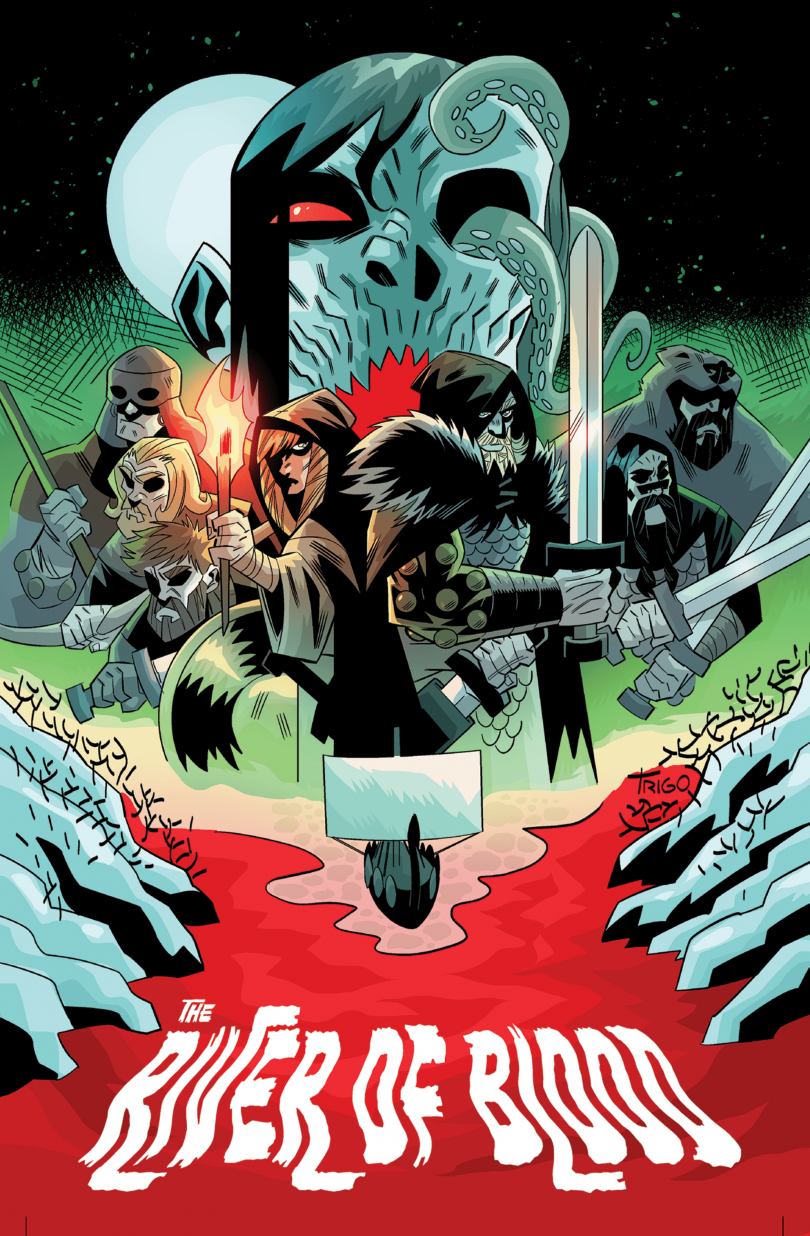 Constantinople, 996 AD. The Viking Wulfgar and his men work under the emperor as personal bodyguards. However, when Basil is sent away on business, Wulfgar is imprisoned by a scorned town’s guard. With help from his men, he makes his escape. But this takes him down the mysterious Volga river.

Pirates, monsters, and vengeful Gods are only some of the dangers that lurk in its murky waters. In order to help a small village, Wulfgar takes up arms against these enemies, yet the true nature of the horrors he faces is so vile, he may soon regret ever sailing in these waters.

If you were to ask me about the two writers I most adore in this world, I would easily tell you, Mike Mignola and H.P. Lovecraft. The sense of dread and cosmic nihilism that they are capable of creating makes an enticing story, that truly leaves one pondering how a protagonist can face these insurmountable odds.

So to read a comic that takes such direct inspiration from these sources fills me with excitement and concern. A completely unfounded concern in this particular case. The River of Blood is a pure and absolute spectacle of horror and action.

Sean Fahey’s comic is more than just an adventure/supernatural epic, it is a beautiful exploration

I felt invested in the narrative by the fifth page. It quickly introduces a large cast of interesting and unique characters, all contributing to the greater narrative without feeling heavy-handed. The “heroes” (they’re no saints mind you) have clearly defined relationships that create a cohesive team dynamic.

Wulfgar gets most of the spotlight in the first few issues, where he is established as a true leader with a heart of gold, sometimes to a fault. This ragtag group may not all fully stand for truth and justice, but they have each other’s back; at least to an extent. Overall, the team is deadly yet dysfunctional, with mutual respect and acknowledgment of abilities.

Folklore and actual historical inspirations fill the story. There is a conflict between the Christians and Norse currently brewing and it makes for an interesting exploration of a few characters. Wulfgar’s party contains a devout Christian. His backstory remains vastly unexplored, it is shown he is quite an adept killer, having earned his place amongst the group. Religion is a continued topic in the story, though never feeling heavy-handed.

The folkloric aspect comes in the form of the Rusalka. Think lady of the lake, but she wants to eat you. They are immediately established as a real and potent threat unlike any that has been seen before in the story. But they are not the only villains in the story.

Although the human villains may be deceitful and filled with malice, they are not inherently scary. The Rusalka however command fear, and they really raise the stakes in asking the question, “How the hell are they going to beat these damn things?”

There are so many pieces and so much lore that all stacks to create a truly compelling and engaging story. All of this coupled with a gorgeous and dynamic art style really creates an outstanding comic book. Do yourself a favor and pick this one up, you won’t regret it.