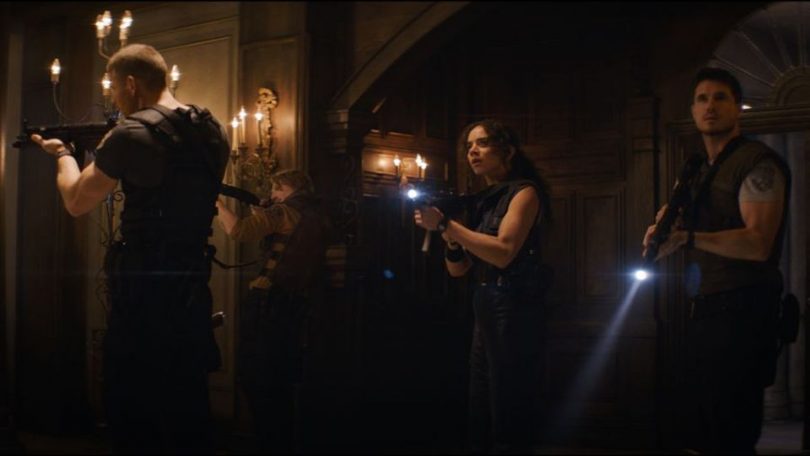 On a scale of good to bad in terms of video game adaptations, Resident Evil: Welcome to Raccoon City is at the midway point. In an era where The Witcher and Arcane receive critical acclaim, it appears vital to both honour the source material and tell a compelling story. The latest cinematic take on Resident Evil is a well-intentioned reboot, but sadly falls short of having a strong script or interesting characters.

The movie is very different from the six-part series by Paul W.S. Anderson, trying to recapture the slow burning dread and twisted horror of the games. For the most part it succeeds visually, though is hampered by the movie’s budget of a mere twenty-five million dollars. There is a lot of questionable CGI, which at times looks like it was take directly from the original 1996 video game.

It is obvious that director Johannes Roberts had his heart in the right place, speaking passionately for his love of the games and desire to make a respectful movie. Though making faithful recreations of the games’ locations, monsters, and even certain camera shots, Welcome to Raccoon City fails to deliver a decent story. The film is a fusion of the first two games, but it is like trying to put two jigsaw pieces together that don’t match.

In the opening scene, the Redfield siblings Claire and Chris live in the creepy Raccoon City Orphanage, run by the villainous William Birkin (Neal McDonough). When Claire encounters a deformed, mutant girl named Lisa Trevor, Birkin plots to experiment on her as he did with Lisa. Claire runs away, leaving Chris to be raised by Birkin, under the impression his younger sister abandoned him.

Years later, Claire – played by a bored looking Kara Scodelario – returns to Raccoon City, which is in a downward spiral. A company town ruled by the Umbrella pharmaceutical corporation, Raccoon City is on the verge of collapse after Umbrella closed up shop, leaving a handful of cops and citizens behind. There is something afoot, as many of the residents are bleeding from their eyes, and even the wildlife is freaking out. Claire and a hapless truck driver accidentally run over a woman, only for her to get up and walk off without their notice. The trucker’s dog licks the woman’s blood, mutating into the iconic “Cerberus” monster from the games.

Claire reunites with Chris (Robbie Amell), who is a member of the police force’s STARS team. Claire has spent years investigating Birkin, connecting him to Umbrella, thanks to a conspiracy theorist named Ben Bertolucci (Josh Cruddas). Ben claims that Umbrella have been developing biological weapons, poisoning the city’s water to experiment on the populace. Turns out Claire and Ben are right, as people start turning into zombies, and Umbrella shuts down the city to destroy it.

Chris is sent off with the rest of STARS – Jill Valentine (Hannah John-Kamen), Albert Wesker (Tom Hopper), and Richard Aiken (Chad Rook) – to investigate a supposed body at the Spencer Mansion, where the Bravo team were sent earlier, but disappeared. That leaves the hammy, corrupt chief Brian Irons (Donal Logue) and rookie cop Leon S. Kennedy (Avan Jogia) to hold the fort when things go to hell, soon joined by Claire. The STARS team travel to the mansion, finding the Bravo team being eaten by a horde of zombies, forcing them to fight for survival and uncover the mansion’s secrets. Meanwhile, Birkin, who has become a family man, races to secure his “work” when the city faces destruction.

Frankly, watching Welcome to Raccoon City reminded me of Warcraft, another good-natured movie that captured the aesthetics of its source material, but had a dull, lacklustre story. At times, the movie feels like a checklist of visuals and in-jokes that need to be ticked off, whilst the characters are interchangeable. It would be unfair to compare the film to the Anderson films, but at least Milla Jovovich’s Alice character was memorable.

Kaya Scodelario depicts Claire as this stoic badass who is never horrified or troubled by what she sees, in spite of her assumed childhood traumas and estranged relationship with Chris. Robbie Amell and Hannah John-Kamen are given nothing do as Chris and Jill Valentine, aside from inserting their characters into a weird love triangle with Albert Wesker of all people.

Tom Hopper is always welcome, though his portrayal of Wesker is certainly interesting. Rather than being a diabolical mastermind, Wesker is more of a chummy friend who has ulterior motivations that he hopes will get him out of miserable Raccoon City for a better life. Avan Jogia provides an adequaete take on Leon, but the character is so utterly useless at everything, it is no wonder everyone reminds him that he is a loser. Neal McDonough looks embarrassed to be in the film, whilst Donal Logue chews the scenery for all it is worth, perhaps a welcome relief considering how much of a scumbag his game counterpart is.

Perhaps if the film had focused on one game instead of two, it may have let the convoluted yet paper thin plot flow better. Birkin was rewritten as a father figure to Chris, but beyond a passing mention in the script, we do not explore their relationship. There are brief moments of depth amongst all the long-winded shots of screaming zombies, but the miscast actors and shoddy writing do not help things.

Still, in spite of the limited budget, clunky screenplay, and dull characters, the movie still has some highlights. It certainly feels more like a horror film when compared to the Anderson era, especially when the STARS team get to the mansion, encountering a zombie chowing down on a fellow teammate. There is another gripping scene where Chris has to shoot zombies in the dark whilst relying on a lighter for brief moments of navigation. But, these moments are sadly fleeting, unable to make up for the lack of a good story.

The director’s desire to make a good Resident Evil film is present, but fails to really execute his vision beyond call backs and visual nods.

What are your thoughts on Resident Evil: Welcome to Raccoon City? What were your favourite video game adaptations of 2021? Leave a comment below, or on our Twitter feed.