Home » “Savage Avengers #1” Kicks Off a Brutal Adventure Across Time 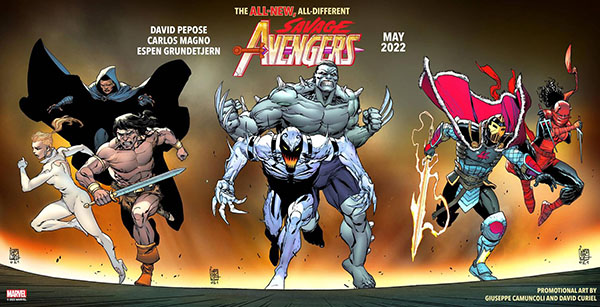 This week marks the start of the All New, All Different Savage Avengers. Just as exciting, this is the Marvel debut for writer David Pepose, known for Spencer & Locke, Scout’s Honour, The O.Z. and breaking the top 5 on my personal “writer’s to watch” list. If you’ve read my review of Spencer & Locke, then you’ll know why I got my hands on a copy of Savage Avengers #1 as soon as I possibly could.

Rounding out the creative team are Carlos Magno (Kang The Conquerer, Robocop: Dead or Alive) on art, Espen Grundetjern on colours, and Travis Lanham as letterer.

Despite already being predisposed to like Pepose’s writing, I was just as predisposed against the Savage Avengers concept. Personally, I’m not a huge fan of team books and ordinarily this series would have slipped below my radar. But I am now rethinking that whole stance, as Pepose has delivered a story that pulled me in and showed me a new side of the Marvel Universe.

Like virtually all Marvel comics, the story sounds ridiculous when you explain it. A group of heroes all find themselves converging on Deathlok as a Madness Bomb is detonated. The detonation scatters the heroes through time, and the first issue ends on that cliffhanger, with the promise of some timey-wimey adventures to come. But as any comic fan knows, in the right hands even the silliest of stories can become great. Pepose uses his noir sensibilities to add a sense of dread and purpose to the tale, giving it enough drive that I am counting the days until the next issue drops.

Given this is a team of C-list characters – several of which even I had only a passing knowledge of – Pepose had quite the challenge introducing them to the reader without letting the story grind to a halt. Fortunately, Magno’s art keeps the action flowing and the narration fits the pace. I think I would have been more lost if I wasn’t fairly up to date on what’s happening in the world of Daredevil and Spider-Man, but any casual Marvel reader will have no trouble jumping in and enjoying the adventure.

This line-up of the Savage Avengers is a mix of old and new faces. Conan the Barbarian is the clear headliner, returning alongside Elektra (now the new Daredevil) and Anti-Venom (Flash Thompson). Those last two were the ones I alluded to earlier who may confuse readers, as those identities shifted relatively recently. Adding to the mix are Cloak and Dagger, Weapon H, and Black Knight (Dane Whitman).  It’s quite a varied team in terms of power sets, and I look forward to seeing their dynamics on and off the battlefield.

Magno’s art was a great fit for the story. Instead of the crisp Marvel style we’ve been seeing as standard of late, this had a very 90’s feel to it. It gives the story an appropriate pulpy vibe, as though the modern heroes were guest-starring in a classic Conan comic. I also really liked the Anti-Venom and Deathlok designs (although I don’t know if those are specifically Magno’s). But my favourite design has to be Cloak’s cloak in the big splash page where there are screaming faces hidden amongst the folds. Very effective stuff.

Pepose has set a high bar with his first issue at Marvel. Savage Avengers is off to a great start and I’m excited to see what comes next!

You can get Savage Avengers #1  at Marvel.com, Amazon, or your local comic book store.