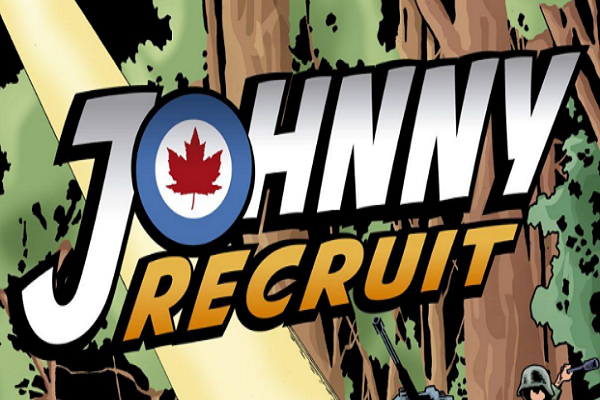 I have covered comics set in World War II before—or at least, ones that involve beating the crap out of Nazis. Today’s comic is no different! However, instead of punching Nazis, this comic takes us to the skies and drop bombs on them! Welcome to Johnny Recruit; a tale of a kid who joins the army to rescue his uncle from Nazis.

Johnny Recruit comes in at twenty-six pages of content. That’s pretty standard for a comic. But the content is anything but standard! Beyond the black-and-white pages, Johnny Recruit has absolutely no dialogue whatsoever. No snarky narrators, no characters talking to each other—no nothing! Every flip of the page presents a two-page spread. This allows the reader to take in more of the story and art. Each spread is a scene; whether it’s soldiers in their base, or inside a fighter jet in the skies. The art itself is gritty and realistic, not shying away from the action involved in war.

With all this in mind, what is the story? Well, if I never read the synopsis beforehand, I would have assumed this is just a comic depicting World War II. But this has a deeper plot that follows a set protagonist. Big Johnny, a fourteen-year-old kid, joins the army with one goal in mind; he wants to rescue his uncle who was taken as a hostage by the Nazis. He has to lie about his age in order to join. But one British soldier catches on and threatens to reveal his secret. Thus, Johnny has to take to the skies to prove his worth as a pilot. He uses his skills as a bush pilot and game hunter to navigate through the terrain.

As I mentioned before, Johnny Recruit has no dialogue. If you’re like me, then that might be a red flag for you. How are you supposed to know the characters if they don’t talk to each other? Sure, you can tell a convincing and emotional story with no dialogue – look at the first ten minutes of Up! Based on its synopsis, Johnny Recruit tells a very powerful story about how far a kid is willing to go to save a loved one. But without the dialogue, you really have to pay attention to the little nuances within the pages.

You only know Johnny’s age from a collapsed birthday cake with a sign on top reading “Happy 14th Johnny”. On that same page, Johnny is seen hanging a moose that he caught. This alludes to him playing a hunting game. The very first page of the graphic novel puts us in a church for a funeral service. On the fourth page, on a shelf in the corner next to a picture of a man, there’s a plaque reading: “In Loving Memory”. Since this is in Johnny’s house, that funeral service is likely for his father. It’s easy to connect the dots after that. Johnny doesn’t want to lose another family member to this war.

While it’s obvious that these little things are what you have to pay attention to, it does beg the question; does all of the detailed work mean that dialogue is unnecessary? I can see an argument for both sides. On one hand, no dialogue means we don’t know who Johnny is as a person. What does he act like? How does he treat everyone around him beyond these little visual clues?

Overall, Johnny Recruit is a uniquely powerful comic about how far you’ll go to save those you love. Even though there’s no dialogue, the detailed work paints Johnny as an honorable and brave kid. If you love wartime stories and historical narratives, this is the comic for you! Just keep in mind that this isn’t a quick read. You’ll want to focus on this one so you can keep track of all the details. I promise you, spotting all of them on each page is highly rewarding and heightens your experience of the story. I also recommend reading the synopsis beforehand, just in case! Of course, you usually read a comic’s summary before you dive into it, but this one’s important. Can’t hurt to have that context, you know?

What did you think about Johnny Recruit? Is the lack of dialogue a detriment to the story, or does it work better as it is? Johnny Recruit has a Facebook page, where you can learn more about the comic’s inspirations and purchase details. Let us know all your thoughts in the comments or send us your thoughts on Instagram or Twitter!