Home » “The Hardways” Is A Love Letter To Crime Capers 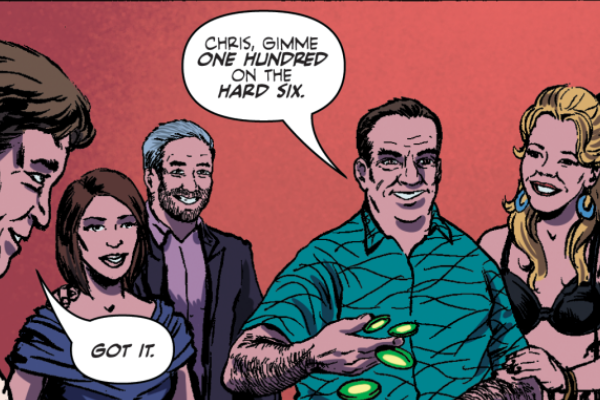 Welcome to Las Vegas, city of glitz and gambling. A place where you can win big, but you never know when your luck is about to run out. For Maury Garvey, a regular at the Koala-T Casino, tonight’s the night. The Hardways – written by Russell Lissau with art by Shawn Richison – introduces us to Lissau’s love letter to caper stories. It’s a strong opening that takes us to the bustling world of casino tables and slot machines. Rule number one: be careful who you trust!

From the preface of the first two issues, Lissau sets the stage for some fun twists on the caper formula. When masked kidnappers capture Maury, they get more than what they bargain for when demanding money. I love the humour in the ransom responses, especially from Maury’s wife Rosie. She delights in the prospect of inheriting all of his property and money; it’s a fun take on the gold-digger stereotype. It may be a far cry from the usual “concerned relative” you expect to find in any other scenario, but this is a great touch nonetheless!

Another character I find intriguing is the casino manager Cheryl Dahle. Her response to the situation shows some fierce determination. I really enjoy her no-nonsense approach when she challenges the kidnappers about one of her VIP customers. When she calls her dubious contacts named The Brandini Sisters, you know she’s not the one to mess with. This is where Lissau sets the scene for the classic trope of a seductive femme fatale. Casino guest Rachel plays her part in the crime, but shows some reluctance to the kidnappers’ methods with Maury. Whether or not she will help him remains to be seen.

I also really like the visuals of The Hardways. Richison’s art captures iconic Vegas imagery; from the establishing image of the casino to the dice rolling across the table. Letterer Josh Southall enhances this sense of sound and movement. The angles draw you into the action of Maury’s lucky streak; its main title logo grounds the comic and incorporates landmarks from the Las Vegas skyline, such as its replicas of the Eiffel Tour and the Statue of Liberty.

In the opening pages, colourist Juan Romera utilises the classic deep reds and greens of the game, bringing the casino to life. You could almost imagine Frank Sinatra sitting in the background at the bar. In fact, the overall aesthetic is almost retro, like the movies that inspired Lissau. It contrasts with the occasional use of modern technology such as security systems and smartphones. But still, it overall evokes a sort of timeless feel. As the action moves away from the garish lights to the shadows, Romera uses deep blues instead. This enhances Maury’s shady new situation. Tonally, it suits the story very well.

It’s safe to say that I’m a fan of this introduction to The Hardways. It pays homage to a classic genre and balances crime and comedy elements effectively. Based on the first two issues, I bet we can expect some spanners in the works for the kidnappers; mainly in the form of The Brandini Sisters it seems—just how dangerous are they? I’m looking forward to seeing what Cheryl is prepared to do to make sure she keeps one of her biggest spending clients safe. If it’s between her and the kidnappers, my money is on Cheryl.

Are you are fan of crime capers? You can check out The Hardways over at Comixology. Let us know what you think of The Hardaways via Facebook or Twitter!