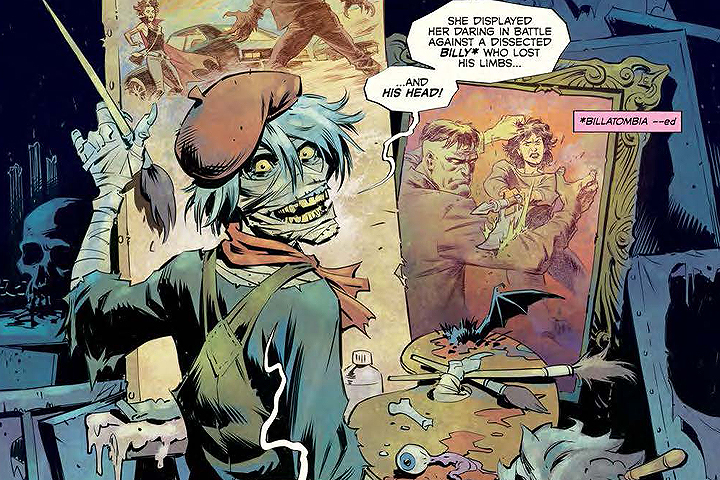 Count Crowley #4 opens with a carnivalesque introduction, complete with its own Ray Bradbury flare in the narration. Anyone who has ever read Bradbury’s October Country will know that feeling of constantly being watched. That’s the same feeling this comic evokes. My reading of this also has impeccable timing with the release of Werewolves in The Sims 4. As I brave the long wait for the game pack to go on sale, I hunger and thirst to play with the lycanthrope. Thank god for Count Crowley indeed. And also thank god to writer David Dastmalchian and artist Lukas Ketner; they breathe so much life into this series, making it such a thorough and captivating read. Not to mention Frank Cvetkovic and Lauren Affe’s work on the letters and colors.

A world of occults – from vampires and werewolves; this series uses the exhibition of the uncanny and fantastic in a carnival-like setting. It’s the same trope seen in American Horror Story: Freak Show and ‘The Jar’ in Bradbury’s October Country. However, this one debunks a lot of the old and tried methods of killing such supernatural creatures. It’s no longer just holy water and crosses; the graphic novel makes a point that if churches are actually toxic to vampires, there wouldn’t be so many of them. The stakes are higher and methods more extreme. Jerri – Count Crowley’s protagonist – is a sobering alcoholic and journalist; another common trope used here is having a writer as the guide of a mystery and horror story.

Jerri is such an outstanding character. She’s likeable, assertive with a sharp tongue, and has all the guts of an investigative journalist. Which is why it irks me just a little bit that the ending refers to her as a “damsel in distress”. She has proven throughout the entire issue that she’s plenty capable herself. On the other hand, it’s time to reclaim the “damsel in distress” title to something without the negative connotation, but simply just a description of circumstances. Speaking of reclaiming titles, one other thing that is quite annoying is the constant assertion that it’s all about “men” when it should be about “humans”. I understand there’s a critique to be made about gender inequality. But statements like these don’t really add to the conversation; they’re throwaway lines with forced delivery. I say show, not tell.

Visually, the comic does a lot to really excite the readers. It uses jump scares to hook and lure you into a false sense of security. The color filter used is papery and desaturated, giving the overall comic an old-timey horror feel. In typical fashion, Count Crowley uses dark shadows and shading to create a mysterious and menacing look for its antagonists. These create a very animated and three-dimensional texture to the panels. One especially amazing stylistic choice uses monochrome vector art pieces to depict the shadows and shapes of specific people and scenes. This really lifts the whole graphic novel up with high and sharp contrast against the dull pastel-like color palette.

That’s not all there is to Count Crowley’s visual prowess. There’s also the outsider narration over top of the image of Hubert transforming into a vampire. It’s truly a menacing sight and the epitome of what horror stories are; kind of like Snow White’s “skin white as snow, lips red as blood, and hair black as ebony” moment. Which, aside from Bradbury vibes, also attaches a Brothers Grimm feel to the comic. Finally, the fight scenes are cool with decent flow of movement and action. All of these things combined just makes Count Crowley the fantastic read it aims to be.

What’s your favorite supernatural creature? Is it the elusive vampire, or the moon-howling wolf? If you want to read more about such occults, find Count Crowley #4 over at Dark Horse Comics. The series has Volume 1 out, with Volume 2 ready for pre-order! If you’re interested in it, let us know why or if you’ve read it, tell us what you think of it over on our Twitter or Instagram!