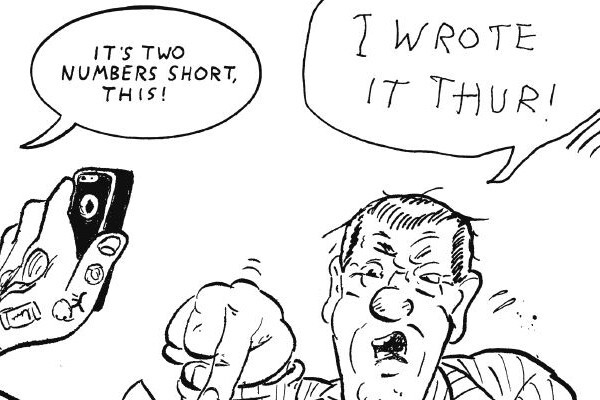 Blat by Mat Greaves is an absurdist satire of modern life. His humor carries the same sardonic edge of British comedy; he doesn’t flinch away from analyzing the complications and unfairness that life in today’s world comes with. Instead of a sequential story, Blat’s layout includes a couple of smaller form comics that make up the whole. They vary in terms of artistic style and situation, although all of them make a critique of some kind. One of my personal favorites is a little comic at the end of #1 called ‘Albert’. Although not very complex, the narrative is solid and it tells a fragmented story that still feels complete.

Greaves tackles issues that run the gambit; from the search for meaning in life, to the exploitative nature of people who build careers off of the suffering of others. He does not necessarily have an answer to these problems; rather, he seems more concerned with shining a light on them than coming up with a solution. Most of these comics seem to come from a sense of bitterness of some kind. This bitterness tinges the works, draining them of any sense of wonderment they might otherwise provoke. He does not make these stories with the intent of providing mindless entertainment. Instead, he reveals the hard edges of life and the dark meaninglessness that threatens to overwhelm everyday people.

One of Greaves’ strengths is the adaptability of his art style. It changes depending on the tone of the story he tells – not bound to any particular form or function. This fluidity allows shifts in style to convey part of the storytelling rather than simply from the story itself. He also does interesting work with narratives; each of the little comics tells a story in radically different ways. Some of them are purely absurdist; others take the form of dark funny paper comics; still, there are those that tell a complete story, following a fairly straightforward plot structure.

Blat has its flaws. Sometimes it feels as though Greaves leans too heavily on the sardonicism. It’s to the point where some of the strips almost feel nihilistic. He taps into a grim mindset that sees life as full of meaningless drudgery. People work until they go home and drink to forget, and then eventually they die. As an artist, he does not necessarily need to offer something different than his observations about the world. But nonetheless, it feels as though his comics are fueled solely by humanity’s worst impulses. He doesn’t acknowledge all the attempts at goodness that also exist.

The world is a balancing act between the largescale of awful things occurring in everyday life, and the small kindness of others that help each individual get through it. It feels unfair to me that Blat only engages with one side of our humanity. Perhaps life is meaningless, but we should not just give up. We are more than the circumstances that shape us, and we can forge our own meaning.

Is your cup half full or half empty? Which comic resonates with you the most in Blat? If you’ve yet to read it, check it out over on Big Cartel and Gumroad. Make sure to drop a line on either our Facebook or Twitter for all your thoughts comic and Blat!