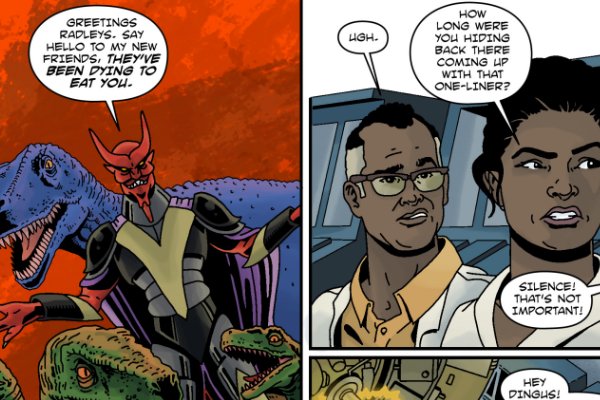 For many of us – childhood is a time of imagination and adventure. Tiny plastic vehicles race through futuristic cities; toys are the star-studded cast of unlikely playroom blockbusters like Barbie versus Velociraptor; sandcastles become fortresses and the bathtub is an ocean. For Rex Radley, these escapades take him far from the classroom and across the planet. The monsters and robots in his world are very real indeed.

Writer and colourist Winston Gambro creates a vibrant series of short stories in Rex Radley: Boy Adventurer. Rex is a borne-adventurer. The son of two estranged scientists; his father is American physicist Alan Radley who travels with a cavewoman bodyguard from another dimension, and his mother is Japanese defence researcher Rin Hashimoto who protects Japan with her mech Superobotto. The combination of these elements is as wacky on paper as it sounds. But hey—it works! I enjoy the way that the stories alternate between each parent. Both sides of Rex’s life have equally high stakes, amidst the mundane tasks of homework and chores. Not your typical eleven-year-old; he fends off masked Japanese crime organisations while home alone. He’s a likeable character that can hold his own against the adults surrounding him.

The comic follows a monster-of-the-week format favoured by many sci-fi and fantasy TV series. Creations such as the Dinosaurians and the Mole Men are fun opponents for the Radleys. I particularly like the Dinosaurian leader, Prince Dragus. He’s has that classic animated villain energy. Some of his lines wouldn’t be out of place for a pantomime. The opening and closing narration that Gambro uses to introduce some of the stories also makes me nostalgic for shows such as the original Pokémon anime.

A particularly strong element of Rex Radley is its sense of humour. Gambro often breaks the fourth wall; telling readers to “see issue…” then stating “I’m pretty sure that doesn’t exist”. He parodies the long-running nature of many classics and jokes about characters and organisations being poorly-named. For example, the UK convention named “Techloncon”; this reminds me of the odd villain names from Batman such as Polka Dot Man and Egghead. These tropes help add a sense of continuity to the comic. Regardless, the stories remain enjoyable even as individuals.

Rex Radley is supposedly suitable for young readers. But worry not, some of its jokes and references are a special treat for us adults. Much like a good Pixar movie, there is something here for everyone. My favourite example is the line “Kids, ask your parents who Barry White is”. Also, the moment when Rex’s mother Rin questions why she gave an AI an anxiety function is comedy gold. It catches me off guard and really makes me laugh. The comic never takes itself too seriously – the sound effect label reminding us that there’s no sound in space is a great touch.

When it comes to artwork, Gambro collaborates with seven artists on pencils and inks across the two issues and its eight stories. They are Leandro Panganiban, Paul Williams, Christine Hipp, Jey Pawlik, Nico Gamboa, Sebastian Sala and Rachel Disler. This is an interesting choice that finds common ground in Gambro’s character designs. For the most part, it works. The characters are recognisable, and the different styles allow room for each artist to make their mark. Your favourite will depend on personal taste. A highlight of mine is Panganiban’s artwork in “Turtle Trouble”; the details of Superobotto and the monster really bring the story to life. Gambro’s use of colour throughout the comic is another highlight. He uses vivid tones that jump off the page and emphasise the mysterious creatures and locations.

Overall, I really like Rex Radley. It’s a fun action adventure series that appeals to the 90s kid in me. It captures all the excitement of classics such as Power Rangers and the cartoons of my youth. Gambro creates a real lived-in world for Rex within a short space of time. I love that he includes behind the scenes artwork and development; it gives the reader an insight into the process. I look forward to seeing what colourful adventures Rex gets up to next!

Are you a fan of larger than life adventures? Do you like your action with a side of sci-fi? You can check out Rex Radley Boy Adventurer #1 and #2 over at Gumroad. Check it out and tell us what you think of Rex Radley and his adventures via our Facebook and Twitter!