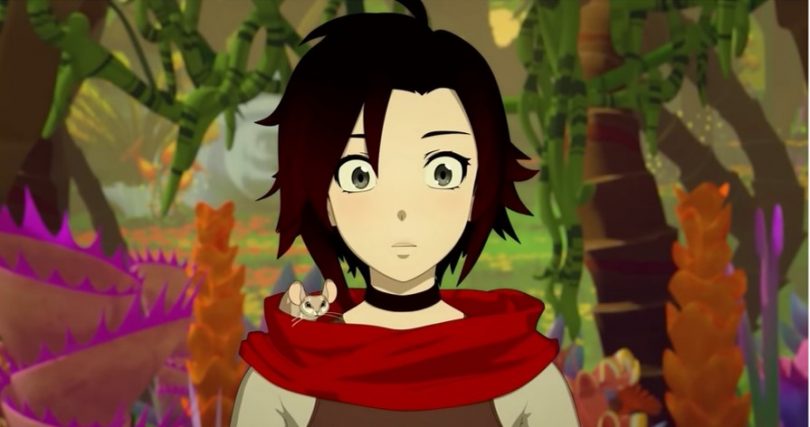 As a reward for reaching the halfway point of 2022, Rooster Teeth gave us some long awaited information on RWBY’s ninth volume. At their annual RTX convention, the show’s writers and main cast took to the stage to reveal exciting new announcement for Monty Oum’s popular franchise, which takes off in more wild directions faster than imaginable.

RWBY: Ice Queendom, the new anime adaptation by Studio Shaft, begins airing. The first three episodes were released to FIRST premium members on Rooster Teeth’s website. The anime is beautifully crafted. In what could be deemed a perfect circle, Oum was inspired by anime when developing RWBY, especially in the action sequences; now an anime is recreating the show’s incredibly choreographed fights. An English dub has yet to be completed, which will see the return of the original show’s cast.

The most surprising announcement was RWBY/Justice League, a brand new animated feature that is based on the crossover comic book miniseries from 2021. Team RWBY met Remnant versions of Superman, Batman, Wonder Woman, the Flash, Aquaman, Cyborg, and Green Lantern. The film is being made in co-operation with Warner Bros. Animation. Set for release in 2023, this new film is a new step for Rooster Teeth and the franchise.

The biggest takeaway from the announcements was details on Volume 9, including a teaser trailer, and the release of 4-minute clip from the first episode.

At the end of Volume 8, all of Team RWBY, Jaune Arc, and Neo all fell into a void during the evacuation of Atlas. A brief clip was released of the volume earlier this year, where Ruby Rose fell through limbo and found herself on a mysterious island. The trailer revealed that the other characters landed here as well, and will reunite. The island is named “Ever After”, the inspiration behind the in-universe fairy tale of “The Girl Who Fell Through the World”, about a girl named Alix who fell into a new world, but upon returning home, was saddened, as her journey had changed her. This implies that the characters will go through an emotional experience, likely departing as different people.

Ever After is inspired both by Wonderland, but also the board game Candy Land. In the centre of the island stands an enormous tree, similar to Yggdrasil, the World Tree from Norse mythology. In the preview clip, Ruby finds that the normal rules of reality don’t apply on the island, as she tries to reach the tree, but walks through the same spot repeatedly, whilst tormented by an amused dodo. The island suddenly rains when a frustrating Ruby cries, hinting the weather may be influenced by emotions.

Oh, there’s also a talking mouse! Ruby befriends a mouse that she names “Little”, who states that she lacks a name as she is still young, and has never met a human before – or at least does not know what a human is.

The trailer is mostly Ruby-centric, as a female narrator tells the fairy tale, asking the question of what the girl Alix – or in this case Ruby – had become? In a quick flurry of cuts, we see several new, very Wonderland-esque characters, including the mouse, a figure in a crown, a Cheshire Cat-like character pacing around Ruby, a three-eyed creature hiding in a pile of leaves, and a woman dressed in chains and armour, who all ask the same question of “What are you?” The volume may involve a lot of existential, personal, and soul searching as the stranded characters come with terms with who they are and what they have done.

The death of Penny Polendina will hang over the cast as hinted in the trailer. Several shots appear to be of the same scene where Team RWBY are camping, but a teary-eyed Weiss Schnee may be explaining how Penny died. Long story short, Penny was the magical Winter Maiden whose powers were sought after by irritating villain Cinder Fall. To prevent this, Penny asked Jaune to basically help out in an assisted suicide so Weiss’ sister Winter could inherit Penny’s powers. The emotional impact this will have on Team RWBY will no doubt be devastating, especially if Ruby blames Jaune.

Speaking of whom, Jaune does not appear in the trailer, at least not directly. One shot revealed an armoured knight standing before a wall of fire. The armour matches that of Jaune, suggesting the character may appear in an altered state. Other clips in the trailer show an enraged Neo, double-crossed by Cinder last volume; a horned beast that resembles the God of Darkness; an unknown character, perhaps Alix, walking away from the shore in a blue dress; and a despairing Ruby crouching in a location filled with multicoloured fog.

This volume will be a challenging journey for both characters and viewers alike. It still is a long way off until Volume 9, though we will most likely have a concrete release date soon. RWBY celebrates its 10th anniversary next year; with so many projects on the horizon, 2023 is going to be a great year for the FNDM.

Are you looking forward to RWBY Volume 9 and the other exciting announcements? Leave a comment below, or on our Twitter feed.