Home » “Battle Action” Lives Up To Its Name 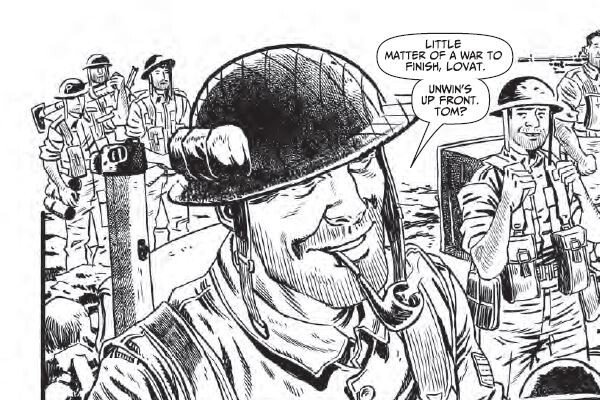 Battle Action is a revival of an old comic book from the 70s – a result from a merger between the comics Battle and Action in 1977. Garth Ennis is the writer for each of the different strips. The strips featured in this comic all have their own artist. These include Keith Burns, PJ Holden, Chris Burnham, John Higgins, Mike Dorey, Kevin O’Neill and Patrick Goddard. Most of the strips connect to different aspects of battle during World War II. ‘Dredger’ and ‘Kids Rule O.K.’ are the exceptions. ‘Dredger’ sets itself in the 80s and features a lone gunman working for the government. ‘Kids Rule O.K.’ takes place in the 80s as well in a post-apocalyptic world where all the adults are dead. Incredible acts of violence drench every strip of this comic – some more justifiably than others.

I especially like ‘Johnny Red vs. Skreamer of the Stukas’, ‘The Sarge’, and ‘Nina Petrova and the Angels of Death’. ‘Johnny Red’ is a fast-paced WW2 adventure starring the ace pilot Johnny Redburn in his fight against the Nazis. ‘Nina Petrova’ ties into this strip; she used to be a side character in ‘Johnny Red vs. Skreamer of the Stukas’ but now she features in a story of her own. ‘The Sarge’ follows a squadron (known as a section in Britain) in their day-to-day life on the battlefield. These three strips have cohesive plots with easy to relate to characters. The action is brutal but never overly graphic.

Certain strips revel more in the bloodshed than others; other strips give commentary about the nature of violence and war. These are the more interesting ones, with tone often shifting between the different strips. Some of them are contemplative, while others are just entertaining. The art style for each of the strips differ according to the artist as well. But all of them render the details with care. Some have color while others are in black and white. Despite the scripts all by the same writer, they do not feel like the work of one individual. This produces an interesting effect that seems to be related to the writing style of the original strips that these are based on.

This does mean that the comic does not always feel cohesive. The issue becomes especially apparent in the strips where action appears as an attempt to thrill rather than to instruct or shed light on the realities of warfare. While this seems a little misguided, Battle Action is meant as a tribute to comics of an older generation. Times have changed; although nuance has always existed – now more than ever, it’s necessary for stories of violence to provide this.

Luckily, this issue only extends to a few strips. The majority have some kind of message. Some admit that the opposing force does not always consist of  black-hearted individuals. Others explore how the bloodshed of war can rip families and lovers apart. Acknowledging that violence does not always consist of good people fighting bad people is important. Nor does it always have a justifiable answer; certain strips deal with this issue as well. This adds a level of depth that better reflects reality in all of its confusion.

Want to learn more lessons in war and peace? Which of the strips catches your eye and heart? Battle Action is available at Simon and Schuster if you’d like to read it for yourself. Don’t forget to sound off in the comments for your thoughts, and maybe hit us up on Facebook or Twitter!