Home » The Threads And Stops Of Life In “LDN” 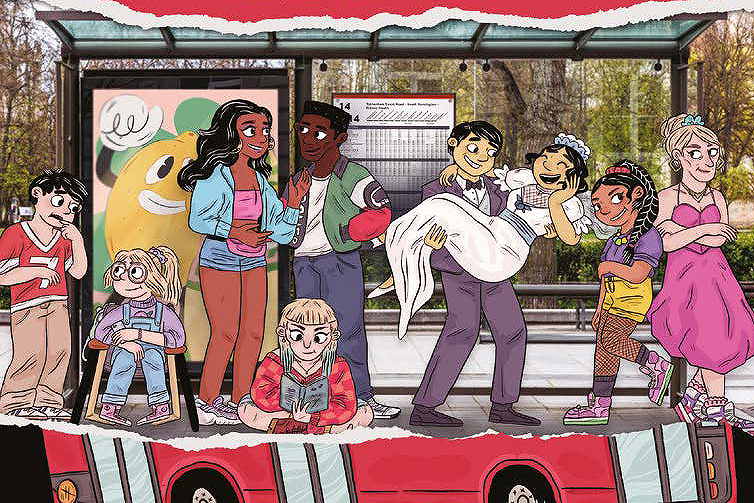 I don’t usually suggest reading the foreword of any book or comic because that is the choice of the reader. But for LDN, I do encourage everyone to give writer Ramzee’s introduction a chance. Just so you can truly understand the perspective he’s writing these stories from. You may realize, that even if you don’t see yourself in the following comics, you’ll find a little piece of that in these words he writes. Especially for me – as someone who recently was just living that London life; these intricate and diverse stories of lives tangled in misadventures that represent the melting pot LDN truly is. It’s by no means perfect in any shape or form – just like the city it tries to depict.

Maybe it’s just personal preference – but you really have to anchor yourself to the plot and characters that resonate with you. That comes with the territory of being an anthology; there will always be some hits and misses just depending on what satisfies your palate. Other stories seem to go on forever with mindless direction. Each new page adds nothing but to elongate that section of the collection. There’s a way to tell some of these in fewer pages. But instead, they trail on slowly and begrudgingly. Other stories are too short when I wish they last a little longer. The highlight by far is the art. It starts at the table of contents, styled in the London underground map. This reflects the tangling of different lives; each and every story begins with the London underground logo and bus stop sign.

‘Sammy’s Mitzvah’ is split into a series of chapters, alternating between recounting of events in typical comic fashion and written correspondences between siblings Sammy and Flick. The latter is very obviously a form of exposition and info dumping. But it’s done in a very engaging manner that it’s hard to fault it for what it is. Ramzee also uses this section to teach the readers more about Judaism. The basic premise is that Sammy and Flick’s grandmother is going to be buried away from her husband. This is because she did not fully convert. The siblings, unsatisfied with the circumstances, hope to do something about this. There are a lot of themes at play here, mostly to do with tradition and culture versus community and family.

Lizzie Houldsworth draws the written correspondences in black and white to perfectly depict their life and family situation. Especially the page where they talk about their separate parents. Sammy and Flick stand in the background, centered in light greyscale as their parents stand back-to-back with a considerable distance between them framing Sammy and Flick, and in full shades of black. The non-correspondences and recalled events are beautiful in lots of pastel gradients. Character designs are simplistic but have a lot of personality. Every turn of the page makes you feel something for the individuals, whether it’s heartwarming fondness or dislike. One criticism for the art is Rabbi Ayala’s shading. He’s said to be a black Rabbi. But sometimes, the shading doesn’t depict his skin color correctly, leaving him as pale as the other characters.

Next up in LDN is ‘Traps’ which explores the hierarchy of gang life. At first, it may seem like a simple story of flirtationship and coincidental friendship on a bus ride to work. But there are little hints throughout that there’s more to it than just that. It’s the messy plays of fate and cycle of violence. A guy previously involved in gang activity ends up liking a girl whose boyfriend he was once responsible for the death of. It’s later confirmed that all along, she was just luring him into a false sense of security and friendship. This then ultimately leads to his possible death. Retrospective narrative constantly jumps in time. Themes are extremely heavy, covering the divide between races and the question of murder in self-defense and power dynamics.

A lot of the dialogue is witty banter in colloquial language giving a sense of familiarity to the characters. Like old Beano comics that use real photographs of London as backdrops, characters overlay on top of these scenes. There’s a strong single-color motif per page by Sajan Rai – a running theme throughout the rest of LDN. The narration pages are abstract art with black backdrops. Symbols and images litter these pages with the ones that relate to the story. This acts as foreshadowing, alongside animated lettering that really draws you into the “in another life, they could’ve been” concept.

‘Happy Together’ is quite ironic in many ways. One of the opening lines describes London as “where the historical meets the phenomenal”; this statement is in direct contrast to the experiences of the protagonist, George. This quick piece sees George looking back on his choices that led him to his wedding day with a woman. He was actually once in love and been in a relationship with a man in university. But coming from a Chinese family, his fear of culture and tradition forced him to hide that side of himself. This broke the two of them up and now he has to pretend to be happy marrying a woman. The comic covers themes of the struggle between the different forms of minorities; the tradition and family dedication of being Chinese, to love in an LGBTQ+ relationship.

This LDN comic uses photography as a storytelling medium. Whether they be professional photoshoots or scrolling through social media images; it’s how George interacts with these photographs that really tell the tale of his emotions. Ilke Missirlioǧlu really hones in on the theme of reality and photography with the art. The present is in tinted red, while the past is in green. This green is the same achromatic palette used for the cropped out scraps of the photographs when the photographer looks through the lens. There’s also this beautiful shot of George holding the woman’s hand in the proposal. But their actual hands touching are darkened in the shadows and hands of theirs are drawn inside, showcasing the fingertips touching; a metaphor for what he’s really feeling inside.

These are not the only stories in LDN. The anthology is rife with different perspectives and people’s lives. LDN is wonderful in some ways. It really misses the city vibe of London in certain parts, which was what I was looking forward to reading. You know, the agonizing everyday tube rides, late night coming home on a bus, the people you meet along the footpaths of London, and the crazy events taking place in every corner and crevice of the city. But at the same time, there are stories untold I never realized I would fall in love with. They’re a look behind the glamor of everyday city life. That’s what I love about it. Could some of the stories be better—sure. But the ones that really resonate with me, I know will stay with me for the rest of my life.

Are you a London native? What are your experiences in the city of old and new, and everything and everyone in between? If you’re looking for something to scratch deeper than the surface of the Central London streets, LDN is exactly what you’re looking for. You can find it over on Good Comics and Waterstones. Let us know your personal London stories on our Twitter or Instagram!