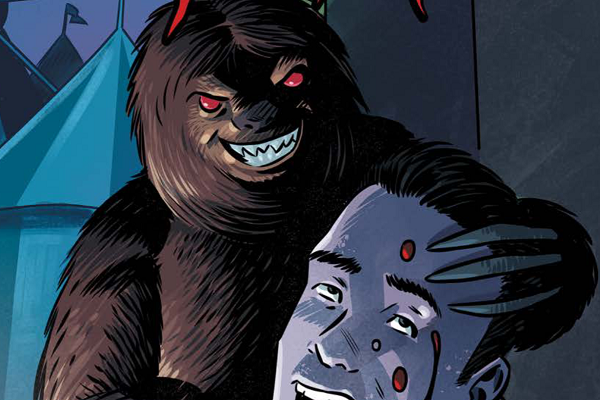 Time for a field trip! Who wants to go to a lab where there are incredibly fast killer sloths running around? I promise, it’ll be fun! If this doesn’t sell it for you, then allow me. Who knows—maybe I might just convince you. In Slow Pokes #1, a group of rambunctious high school seniors get more than what they bargain for with their last field trip.

Slow Pokes is a relatively short comic, coming in at twenty-two pages. Considering how fast-paced the story is, it makes for a good quick read. We follow London James; LJ for short. He and his friend Karate Carlos embark on their last field trip of senior year. They go to a lab containing all sorts of scientific delights. There’s even a full amusement park with bumper cars and rollercoasters! But soon enough, the lab’s confronted by one of their most dangerous experiments: incredibly fast, killer sloths. They tear through anything and everything they come across. It’s up to LJ and his friends to escape out of this all unharmed.

At its heart, Slow Pokes is a comedy. But it also pokes at the horror genre and comes with the appropriate amount of blood and gore. These sloths don’t hunt to survive; they hunt because they like the thrill of the kill. That means there are bones, decapitated heads, and plenty of organs. A girl gets an ice cream cone impaled through her eye socket; some sloth drown a poor boy in his own vomit. The art doesn’t shy away from showing any of this. If you’re queasy or don’t like gore, I’d steer clear of this comic. But if you’re like me and have an iron stomach when it comes to horror, you’ll love how over-the-top things get.

Despite Slow Pokes being a horror parody, there’s an interesting amount of time dedicated to the characters and their stories. At first, LJ and Carlos are your stereotypical high school boys. Carlos has a huge crush on Charity – a girl in their class – and he’s planning to ask her out. His confidence is annoying, but that comes with the territory. Charity and Carlos are actually karate partners, and she’s clearly better at the sport than he is. But not once during their sloth escapades do they exhibit their fighting prowess. I think it would’ve been nice to at least see Charity get in a punch or two. All she does is kick Carlos where the sun doesn’t shine for asking her out—in the middle of the sloth attack! Real smooth, Carlos.

Meanwhile, LJ has got a whole different thing going on. He and a classmate end up smoking joints during the trip and talk about their lives past high school. Remember, this field trip is on their last day as seniors! We learn that LJ’s set up for college, and he’s majoring in art. He wants out of this town. This point isn’t really well-developed past that one panel. It’s hard to tell since the speech bubble comes out of the school bus; but in one of the final panels, someone asks what everyone’s doing after high school. It seems like he’s the only one putting stock into his future. I wish we could’ve explored more of this. Maybe something’ll pop up in further issues.

Overall, I recommend Slow Pokes to anyone who likes horror, parodies, or both! It’s a fairly quick read that you can enjoy on your break. I read this in the span of ten minutes just to give you an idea. It’s clear that the story isn’t over. But this issue also ends on a satisfying note if you want something without a huge cliffhanger. Now get to reading, and be quick about it! The sloths probably won’t wait for you to finish before chopping your head off.

What do you think of Slow Pokes? Do you appreciate how slow sloths are now? You can check out Slow Pokes‘s completed Kickstarter. To support Steve Urena and his comics, you can also check out his Gumroad. If you’re to slow to pick up a digital copy, I’ll send a sloth after you! So don’t forget to let us know in the comments or on our Facebook or Twitter if you get one!