Home » “The Umbrella Academy” Season 3: Welcome To The End Of The World 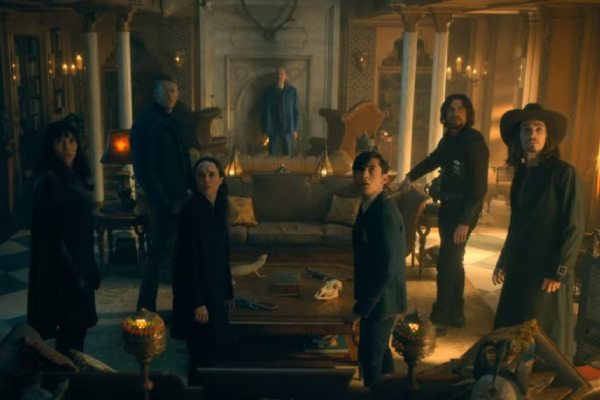 Another day, another apocalypse for The Umbrella Academy. When you meddle with the past, there will always be consequences. This time they’ve really done it; with a Grandfather Paradox creating that mysterious force we see in the trailers. The “Kugelblitz” is a reality-devouring ball of light with a voracious appetite, and the Big Bad threatening our heroes in Season 3. It’s another wild ride full of family drama, danger and betrayal. Overall, I really enjoy this next chapter of the story in Steve Blackman‘s TV adaptation. Here’s your warning, there will be spoilers ahead…

As well as facing the end of the world (again!), the Umbrellas come face to face with their counterparts in this timeline, the Sparrows. Formed by Sir Reginald Hargreeves as result of the Umbrellas’ actions in the 1960s, the Sparrows are arguably an even stranger bunch of oddballs. The season opens with a Sparrows vs. Umbrellas battle, and it’s clear that they are formidable opponents. The Sparrows are interesting additions to the show, but I still have some questions. Namely around the Sparrows’ Number Seven, Christopher. He’s a floating cube with the ability to blast enemies and communicate with his siblings, but he remains a mystery for the most part. While the Sparrows provide foils to the Umbrellas, they do not have as much time for us to get to know and fall in love with them.

The returning cast are on top form, and really seem at home with their characters. Aidan Gallagher‘s Number Five remains a highlight. He conveys all the gravitas of an older man who has been there and done that, alongside his acerbic wit. It’s fun to see him and the other Umbrellas interact with this version of Ben Hargreeves. Justin H. Min gets to play an edgier, more sarcastic version of the character than before. He battles for dominance among the Sparrows, while resisting the automatic affection that the Umbrellas feel towards him. It creates some interesting conflict in the plot.

While I love their performances, there are some character moments that aren’t my favourite. An element that comes out of left field is the revelation of Klaus’ expanded powers. We discover that not only is he apparently immortal, he has died multiple times already. I don’t necessarily see what it brings to the show, apart from the potential to bring him back as a deus ex machina when needed. Thanks to Robert Sheehan‘s portrayal of Klaus, he is charismatic and engaging enough without this addition.

I also find Allison’s journey to be frustrating this season. Emmy Raver-Lampman is a key player once again, portraying Allison’s anger and grief with grit and determination. While her character is understandably frustrated and hurt, it’s sad to see her become self-serving. Her rocky relationship with Viktor continues to be a rollercoaster. I hope that by the end of the next (and rumoured to be last) season, she finds some peace.

A personal highlight of The Umbrella Academy Season 3 is how the show handles cast member Elliot Page‘s real life transition and reflects this in Viktor Hargreeves’ journey onscreen. It’s refreshing to see Viktor’s identity discussed in such a frank manner. His siblings accept him without judgement or drama. Bravo to the show creators on the way they made this an organic part of the season.

I also enjoyed the exploration of this timeline’s Sir Reginald Hargreeves. He truly achieves new levels of bad parenting this season, using the adopted siblings in ruthless ways to achieve his goals. He is cold and dastardly, and Colm Feore is a welcome presence as ever in the cast.

As with previous seasons, The Umbrella Academy once again boasts a solid selection of songs in its soundtrack. The dance battle to Kenny Loggins‘ “Footloose” is one of the most fun scenes in the show. Another highlight is the Hargreeves brothers’ drunken karaoke performance of Bill Medley and Jennifer Warnes‘ “(I’ve Had) the Time of My Life”. These moments inject some trademark humour amongst the destruction and turmoil.

Visually, the season is impressive and memorable. The show doesn’t shy away from visceral fight scenes, with a host of new powers on display thanks to the Sparrows. Who knew a floating cube could be so sinister? I also enjoy the effects of the murder of crows summoned by their Number Three, Fei. Britne Oldford adds a level of cool to the character, while also being someone that you don’t want to cross.

I am left with a lot of questions by the end of the finale. With a rumoured single season remaining, what will become of The Umbrella Academy and its members? Who is Abigail Hargreeves and what is her importance to Sir Reginald? Will any of the siblings actually get a happy ending? How many times can the Umbrellas avert or survive an apocalypse?

I know one thing, I’m excited to find out what happens next. The show succeeds in keeping us invested in the lives of the Umbrellas and their relationships. While none of them are saints, they do the right thing when it matters and have a strong bond despite all of the troubles they’ve faced. Hopefully by the end of the next season, at least most of them make it out alive and find a timeline where they can stop running.

What did you think of Season 3 of The Umbrella Academy? Are you a fan of the new additions to the cast? Sound off in the comments or send us your thoughts on Facebook or Twitter!