Home » “Riders Of Berk: The Ice Castle” Makes Use Of Berk’s Affinity For Winter 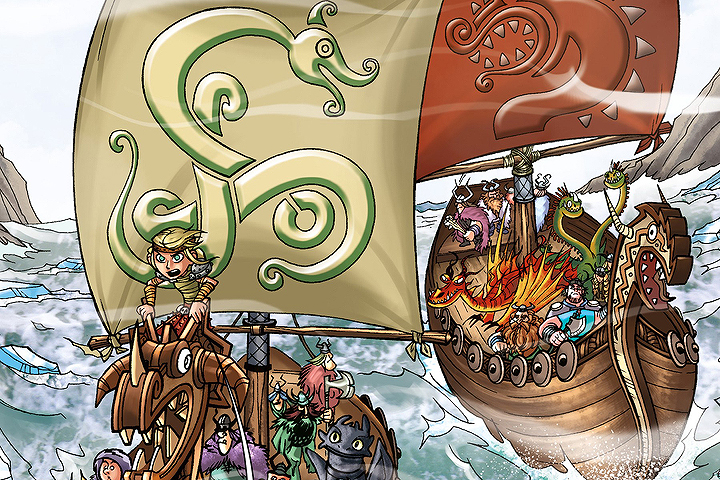 Riders of Berk: The Ice Castle boasts the same work by writer Simon Furman and colorist Digikore. But the art and lettering are different this time around. Jack Lawrence adds his own mark to the franchise with new character designs alongside Jim Campbell’s lettering. This issue follows the gang as a northern merchant named Arngrim Dammen visits Berk with offers of fur. But underneath his friendly face and penchant for upselling is a more sinister motive. Dammen is actually scouting dragons to take and breed so he can auction their eggs off. I know, quite dark and disturbing. He ends up taking Stormfly, leaving the dragon riders and the rest of the Hooligan tribe to embark on a retrieval mission. All the while as they try to stop the auction from happening.

One of the things I really like about the comic series is its continuous effort to stay true to the source material. Here, Hiccup comments that in Berk, “it’s winter most of the year”. This is a nod to his line from the first How to Train Your Dragon film: “This is Berk. It snows nine months of the year and hails the other three”. There’s also the Viking “occupational hazard” referrence. Even the concept of a dragon auction carries over to the Race to the Edge Netflix series. Furthermore, several TV series characters appear here like Mulch and Spitelout. Last but not the least, The Ice Castle features familiar dragons such as Timberjack, Whispering Death and the Boneknapper.

While there’s a significant effort to stay faithful to the overarching franchise, there are of course inconsistencies to take note of. It irks me that they’ve changed Hiccup’s eyes from green to blue. Speaking of colors, Toothless’ plasma blast is purple – not the same shade of fire they use here. But even with all these grievances, there are still a lot I like about this issue. I particularly enjoy the expansion of the archipelago to the north. There’s always mention of the different tribes in the Viking world of How to Train Your Dragon. But rarely do the films and TV series explore these areas. It’s nice to see the graphic novels giving us Dreamworks Dragons fans a little taste of it.

Another little thing I appreciate about The Ice Castle is the set-up for The Hidden World. The whole thing about dragons being sluggish in extremely cold temperature sets the ground work for Grimmel’s plans in that third How to Train Your Dragon film. There’s also the battle between the Northern Viking tribes and the Berkians. That scene is for sure super entertaining. Most importantly, the ending for this issue rounds off really nicely compared to its predecessors. Here, after being taken, Stormfly’s motherly instincts awaken and she takes care of the hatchling dragons.

The change of artist is very evident here. Whereas Iwan Nazif’s work is intricate and detailed, Lawrence uses thick lines and a more cartoony style for the facial features. This design is reminiscent of the actual films and television series. The colors are also a little bit muted and less gradient. I must say, this art style feels more at home for How to Train Your Dragon; the characters are more recognizable and the dragons’ facial expressions are more animated. The dialogue also comes off more natural from these particular designs. As usual, the comedy is top notch and it helps that Lawrence’s work sells it better. The way the kids stare at Gobber gob smacked after his comments about adult dragons and eggs, and the sheepish look on his face right after realizing his mistake is pure comedic genius.

One thing I don’t particularly like about the style is how it forces the coloring to cut certain corners to complement the art. Therefore, the dragons don’t look as majestic as they do in the previous issues. But this is a minor complaint. Aside from that, the art is fantastic in The Ice Castle. I especially love the subtle little hints drawn into the panels; Dammen’s facial expressions in the background and Gobber and Astrid’s suspicions of him, and the fadeout way the text appears when characters whisper. These are effective methods of adding tone and personality without doing too much.

The Ice Castle provides a lot of catnip for any How to Train Your Dragon fan. There’s domestic Hiccup washing dishes, the twins horsing around in the middle of serious conversations, the characters bundled up in winter gear, all the way to high-tech climbing gear. My personal favorite is definitely the whole mess of things that lead Hiccup to training a baby Whispering Death. Anyone who has ever watched Race to the Edge knows that these dragons are just one of the species Hiccup can’t train.

We’re reviewing every single comic from the Dreamworks Dragons series every month in anticipation for the How to Train Your Dragon 2’s ten-year-anniversary. If you love animation and dragons, miss this 2010 classic, and want more of the dragon riders; you may want to check back in every now and then for the rest of the series! You can pick-up a copy of The Ice Castle on Forbidden Planet or Waterstones. It’s collected alongside the rest of the issues in the Riders of Berk title. Let us know what you think of Dreamworks Dragons on our Instagram or Twitter!