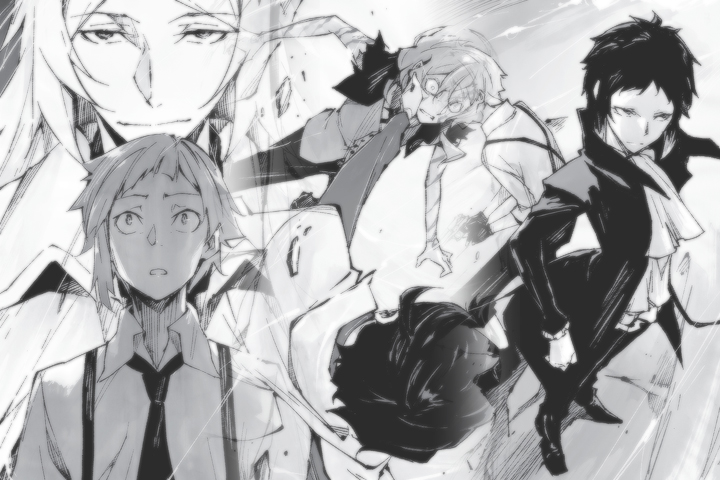 Bungo Stray Dogs: Dead Apple is unusual for your typical Bungo Stray Dogs light novel. It is the only one so far to not be written by the manga series’ author and artist. Instead, Hiro Iwahata writes it and Ganji illustrates the art. This creates some interesting questions about the production of this light novel. Dead Apple – the film it’s adapated from – is a question in itself, production-wise. Especially when considering how Kafka Asagiri, the manga writer, does not work as closely on this project as he has done so with the others. Or – at the very least – the movie gives this impression. Dead Apple has a fairly straightforward plot. A strange mist arrives in Yokohama, vanishing all non-gifted residents. It also separates the gifted from their skills. The second half – however – spirals into confusion, blurring the lines between reality and illusion.

The part that stands out the most about this installment is the art style. Ganji departs strongly from the fashion of Sango Harukawa; producing images with sketchy lines and a more abstract feeling to them. The first image depicts this well with villain Shibusawa looming over the whole page while a smaller Atsushi stands in front of him, holding his breath. Throughout Dead Apple, Atsushi struggles with a door hidden in his mind. Somehow, Shibusawa connects to this, and the image does a good job of insinuating this connection. Another image depicts a chamber and three figures striding from a room. It conveys a sense of scale well, with the figures much smaller than the chamber. The room vanishes into white further up the page, making it feel vast. The best image however shows Atsushi at his breaking point, with shadowy figures enacting a scene from his past.

On the whole, the source material that this light novel draws from has a lot of rough patches. The main villain has no interesting qualities on his own. Fyodor on the other hand appears to be present just for the sole purpose of promoting the third season of the anime. He does not do anything other than cause insurmountable chaos. Dazai’s role makes even less sense. It seems likely that he is included in the story out of a sense of necessity rather than anything interesting to do with his character. Akutagawa gets some good scenes, as per usual. But his characterization does not feel consistent with his portrayal in the actual show. He gets along with Atsushi much too easily!

Despite these issues, Dead Apple does a good job with Atsushi’s character arc. He must reconcile with his skill as he faces a part of his past that he wishes to forget. The door to his hidden memories is a good piece of foreshadowing used effectively throughout the story, building up the tension. Repetition of Atsushi’s negative thoughts throughout also creates further anticipation. This complicates the final revelation of his memories, and does a fantastic job depicting his inner struggle. One of Atsushi’s main problems throughout the Bungo narrative comes from his belief that he has no value. This leads to his low self-perservation and sacrificial nature, further contributing to his confidence issues. Although Dead Apple feels like a flawed narrative, Atsushi gets handled effectively. This story helps him learn to accept all of himself.

We’re reviewing every single light novel from the Bungo Stray Dogs series every month in anticipation for the upcoming fourth season. If you like mentor and mentee relationships, apocalypses and time travel shennaningans, you may want to take a look at our previous review of Bungo Stray Dogs: 55 Minutes. However, if you’re already familiar with Bungo Stray Dogs and would like to read the light novels for yourself, go ahead and check them out over on Yen Press. Let us know what you think of the anime and the light novels on our Facebook or Twitter!