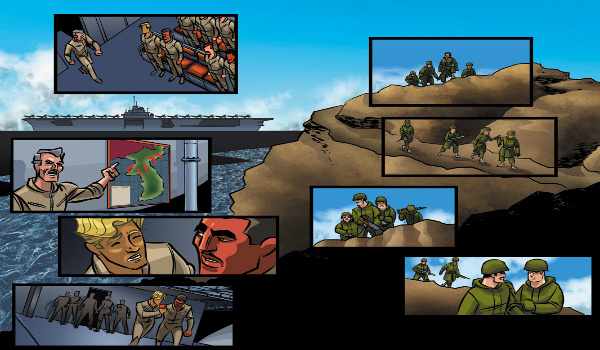 The Frozen Chosin, about the Korean war, written by real veteran Richard C. Meyer, is currently raising funds on KickStarter. Check out our exclusive interview with Meyer about the project.
1. You served in Iraq and Afghanistan, how did you get into the comic industry?

My first few comics were independent or self-published. I then met people in the industry and worked on anthologies such as FUBAR- EMPIRE OF THE RISING DEAD and POPGUN from Image comics.

2. Can you describe what The Frozen Chosin is about?
THE FROZEN CHOSIN is a graphic novel about the Battle of the Chosin Reservoir- the most epic battle of the Korean War. A UN force that consisted mainly of American soldiers and Marines was ambushed by Chinese forces that outnumbered them 10-to-1. The Americans were cut off on all sides and were being chewed to pieces by hardened Chinese troops before being able to escape to the sea.
3. The Frozen Chosin is about the Korean War. Do you think that this war has been underrepresented?
I think the Korean War has been underrepresented primarily because it happened only 5 years after World War II and was eclipsed by a larger conflict. The American public in 1950 was suffering from war fatigue and chose to ignore the war, for the most part.
4. You said that you want very library in the country to contain a copy of The Frozen Chosin. Is it important for people to be aware of what took place?
It definitely is. Chosin is an amazing story of heroism, bravery and loyalty. Some call the battle a “breakout’ but it wouldn’t be inaccurate to call it a retreat. But we still showed honor, even in defeat. Our forces went south, regrouped and fought to ensure the existence of South Korea. The existence of South Korea as a free and prosperous country is owed largely to the people depicted in this book.
5. Can you tell us about the characters and artwork of The Frozen Chosin?
The main characters include John Yancey, a larger-than-life Marine from Arkansas who fought in World War II and is leading some barely-trained young reservists in Chosin. The other story involves Hudner and Brown, two Naval aviators. Brown was the first black Naval aviator and Hudner earned the Medal of Honor while attempting to rescue Brown, who had been shot down.
The artwork is drawn by me and colored by Eric White. We chose a cartoony style to appeal to younger audiences.
6. The Kickstarter campaign says that the project is “thoroughly researched and historically accurate.” Can you describe what kind of research you carried out?
I’ve read basically every book ever written on Chosin.
7. Why did the Department of Defense drop the project partway in?
Not sure. The only answer they gave was budget issues related to the sequester. But considering the red tape and general idiocy I dealt with, I am guessing basic government incompetence was to blame.

8. Could you describe the animated project that will accompany the graphic novel in more detail? Will it have the same story or serve tell its own story? What kind of animation will it feature?
It is 3D animation and will tell a “hidden” chapter from the book. I built the character models and will animate it.
9. Have you had experience using animation in the past?
Yes, I worked as a 3D animator for some small studios in Austin, Texas.
10. Do you plan to make more animated projects?
I plan to develop this Chosin 3D animation and it will be my focus for the next few years. I would also love to animate Nexus, the character created by Mike Baron and Steve Rude but I haven’t gotten permission for that yet.