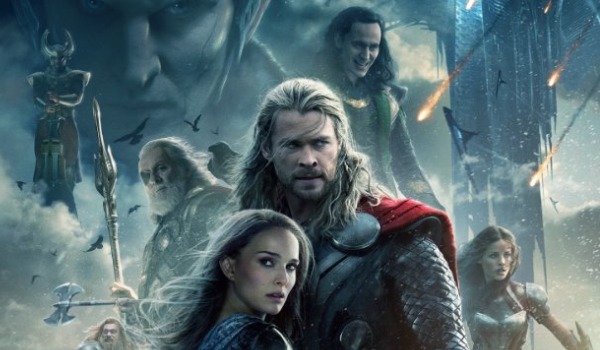 Marvel Studios is the cinematic juggernaut of our time, perhaps all time. Spanning eight films over five years, it has so far grossed in excess of $5 billion. Bi-annual releases were common in Phase 1 of the Marvel Cinematic Universe – films ranging from 2008’s Iron Man to The Avengers last year – and, as of 2013, seems likely to become standard practice: we’ve already had Iron Man 3, released back in May, and now Thor: The Dark World is set for release any day now.

Given the epic scale and scope of Marvel’s game-plan, it feels strangely appropriate that Thor: The Dark World opens before the birth of the universe, a measureless span of darkness over which the Dark Elves reigned supreme. How exactly this was possible, exactly, is never made clear; a lack of something is not the presence of nothing, if you catch my drift. In any case, in a sequence that recalls the defeat of Sauron in the first Lord of the Rings film (that’s a comparison I’ll be making a lot in this review), the Dark Elves are defeated and their leader, Malekith the Accursed, beats a strategic retreat. The source of his power, a MacGuffin known as the Aether, is captured by the forces of Asgard and safely hidden away… that is until the next available moment it can be made use of, some 30,000 years down the line. World’s aligning, blah blah blah.

When Thor: The Dark World picks up again in the present day, it’s been approximately a year since the events of The Avengers. While Tony Stark was suffering from PTSD and picking fights with a composite terrorist, Thor has been busy restoring order to the Nine Realms. Loki, meanwhile, has been locked in the dungeon all the while (though it is a bit light and airy for such a term), and their father, Odin, mostly speechifying. Jane Foster, Thor’s love interest from the first film, stuck on Earth, has been trying to move on with her life, such as going on dates with a hopelessly outmatched Chris O’Dowd – the first instance of the film’s excellent taste in comic relief. Then things go a bit weird – think Stellan Skasgard running around Stone Henge without any clothes on, wielding an antennae array – and before we know it, Thor and Jane are reunited, Malekith returns from hyper-space (or wherever), and we’re up and running towards some great cataclysm.

If this sounds reductive, it’s because Thor: The Dark World doesn’t bring anything particularly new to the MCU. Director Alan Taylor (taking over from Thor‘s Kenneth Branagh) has an eye for battle sequences obviously cultivated during his time on Game of Thrones, but the Dark Elves, dark-eyed weirdos, while not quite as bad as the Chitauri, make for disposable henchmen. Furthermore, Malekith the Accursed is a fairly generic villain – in a word, serviceable – with a pretty standard “destroy the world/avenge my people” motivation, though lent some gravitas by the presence of Christopher Eccleston behind the prosthetics. Asgard still looks like a mix between Naboo and Gondor – an aerial attack on the citadel definitely brings to mind the Star Wars prequels while a mass Viking funeral, barge pyres lit by flaming arrows, recalls a similar scene from the end of The Fellowship of the Ring. Despite this, Thor: The Dark World still possesses a certain “wow” factor, if only because the threat represented by Malekith and the Aether is the greatest yet faced by the MCU.

Even so, an epic needs a suitably grandiose cast and, while Thor and Jane’s romance is done slightly more justice here than in the original – here, at least, they’ve been kept apart – the star of the show remains Tom Hiddleston‘s Loki. He steals every scene he’s in based simply on Hiddleston’s appropriately mercurial performance: the earnest betrayal on his face when Odin sentences him to life imprisonment to the bemusement at being threatened independently and successively by each of the Warriors Three (Ray Stevenson remains wasted as Volstagg, despite a cute dog-pile moment; Jaimie Alexander‘s Sif gets an abortive romance subplot; Zachary Levi, taking over as Fandral from Joshua Dallas, at least gets to break out his best Errol Flynn impression). Loki remains an enlivening presence in the MCU, charming and unpredictable – in short, he’s funny. He’s such an asset to Thor: The Dark World, it’s almost enough to forgive him for skewering Coulson (almost).

The weakest element of the plot is, as with The Avengers, the exact nature of the threat. The Aether makes for plenty of apocalyptic visions and murmuring about its prehistoric origins, but it looks like the love child of a raspberry gummy bear and the Smoke Monster from Lost. Apparently a source of unimaginable power, it, like the Tesseract, simply provides an object of contest: a goal, something to keep from the enemy or else recover from them. The film’s world-hopping final battle – Svartalfheim one second; the next, the Gherkin – apes Jumper in a good way while Thor’s smack-down against lava monster-minotaur Kurse (Adewale Akinnuoye-Agbaje in a purely physical role) brings a physicality to the MCU only otherwise seen in Man of Steel. Also, keep your eye out for what I’ll just call “the Captain America bit”. It’s hilarious.

Thor: The Dark World is imaginative and fun. There’s a lot to like and even a few bits to love – the film manages to be both funny and, at points, almost genuinely moving. It might not have the first-tier cast of The Avengers or quite as many fan-pleasing moments (though apparently Joss Whedon made more than a few contributions), but it brings a new SF/fantasy vibe to the MCU, and none too soon given the mid-credit sting.

The Marvel juggernaut rolls on and I guess all I can say is bring on April 4th, 2014!*

Thor: The Dark World gets three and a half stars.

*Also, apart from the thrill of seeing the new Marvel title jutting out at you, there’s no particular reason to see it in 3D.