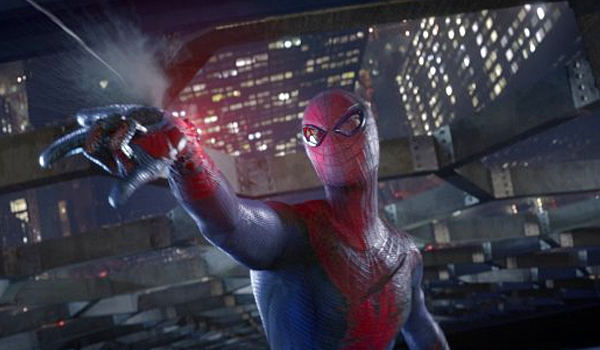 Being as I am a mass of incandescent rage and unstoppable scepticism, I rarely allow myself any feelings of optimism. And then I heard they were rebooting Spider-Man. And for once I allowed myself a pitiful morsel of hope. A fleeting moment when I thought all would be well. So thank you Hollywood, for dashing my hopes and dreams on the cold, hard, unforgiving floor of disappointment and shame. I mean… really? That was the best you could come up with? But you know what? With time comes understanding. Maybe in order to find out what went wrong, we need to go all retrospective on it’s arse!

So firstly we need to look at what kind of story this is. Simply put: an origin story. Erm, Spider-Man already did the origin story in 2002, guys. You don’t need to do it again. Don’t worry, I’m not going to constantly be comparing this film to the original. But it doesn’t make it easy!

Forget story for a moment, let’s look at our main character. Peter Parker is a handsome, physically fit, skateboarding teenager with a cool haircut. Picture me slapping my forehead in disbelief and you get an idea of how this makes me feel. But you know what? I could forgive all that if Andrew Garfield did a decent job of playing him. He does not. This really baffles me. Everybody said he did a really good job and I swear I must have been watching a different film because he doesn’t! He mumbles and stutters through his lines in an incredibly off-putting way and maybe that was intentional but it just comes off as annoying. Plus the character doesn’t really evolve. He starts out self centred and cocky, as he should do because it’s part of the origin story, but remains that way for most of the film. And I know what you’re going to say: “Oh, but he got the eggs for Aunt May in the end!”. So what? The fact that he didn’t in the first place and then told her to go to sleep repeatedly shows that the filmmakers missed the point of Peter being Spider-Man. Having a secret identity is supposed to have a negative impact on his personal life, true, but not because he’s selfish! His personal life suffers because he has to go fight bad guys, not because he’s a bad person. He’s supposed to be torn between two worlds, people! Not so focused on one world that he ignores the other.

Okay, so… side characters. Emma Stone does a fantastic job as Gwen Stacey and, thank the elder gods, the character is written very well. They go beyond the usual position of having her as a bog standard damsel in distress (I’m looking at YOU, Mary Jane!) and make her a strong character that actually helps Peter save the day. Well done, Marc Webb, have a gold star. Also, Chris Zylka‘s performance as high school bully Flash Thompson deserves attention. This character is another example of good writing as he feels very genuine and the evolution from bully to Peter’s friend is handled very well, if perhaps a little rushed. Martin Sheen and Sally Fields are great as Uncle Ben and Aunt May, although the scene when he’s trying to say “With great power comes great responsibility” without literally saying it was a bit awkward.

But the person I really want to talk about is Captain Stacey, played by Denis Leary. Now, I’m not saying that he didn’t do a good job. He is very enjoyable in the film, yadda yadda yadda. But I have to say this. His character is the biggest mishandling of any comic book character I have ever seen. I know it’s an adaption and in adaptions you have to change things. I get it. But they missed the entire point of the character! George Stacey in the comics didn’t hate Spider-Man. He actually liked and supported him, as well as Peter Parker. And one of the best things about him was that it was always hinted that he knew that Peter was Spider-Man. It was never explicitly stated but Peter always wondered if he knew more than he was letting on. He became almost like a father figure to him and that made his death all the more tragic. Here, he doesn’t really like Peter and wants to arrest Spider-Man. Lame. Just lame. They could have still had him trying to arrest Spider-Man, just reluctantly. He almost borders on antagonist levels until the very end. And when he dies, he dies as Gwen’s dad, not Gwen’s dad AND a father figure to Peter. It’s not without impact but it’s a mere shadow of what could have been. Imagine if Commissioner Gordon hated Batman and wanted to arrest him? Actually I’d like that, seeing as how I hate Batman, but even I know that’s simply not the relationship they’re supposed to have! 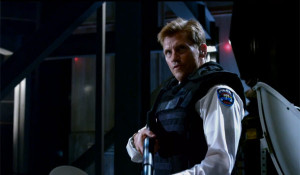 But what of the villain? Could anyone fill the shoes of the previous Spider-Man antagonists? I’m pleased to say… kind of, yeah. Rhys Ifans does a pretty good job as The Lizard, making him a very sympathetic and tragic bad guy, fitting perfectly into what the character should be like. My problem with him lies in his decent into madness. After he injects himself with a serum that will grow back his arm, he transforms into the Lizard and starts wreaking havoc immediately. And he does so for the rest of the film. And therein lies the problem. After transforming he is pretty much geared towards doing bad things, which is fine, but he doesn’t try to fight his dark urges. There’s no implication that he doesn’t want to hurt people. He’s just a bad guy now. In Spider-Man, Norman Osborn does bad things but resists it. He can’t stop himself, but he does at least try. That made him all the more sympathetic. Now, Curt Conners does return to sanity in the end and becomes a good guy again, but it’s more like a switch has been flipped back to sane than anything else.

How does the story hold up, though? As I said it’s the origin story so you’d think that they’d at least attempt to make it feel different, right? Well, no. It feels pretty much the same. Sure the actual events are different, but they aren’t saying anything that hasn’t been said before. But what about the rest of the story? Well… it’s not BAD. But it’s not good either. It pretty much consist of Peter making mistakes, acting like a jerk and taking his mask off at almost every opportunity. There’s a few good bits but they’re few and far between. But what really gets me is the ending. So, The Lizard is attempting to release a toxic gas which will turn everybody into Lizard hybrids and Spidey has to stop him. Fine. How does he get there? All these crane operators call each other and move their cranes so that he can swing from them to get there. I believe that’s a nine and a half on the Implausibility-O-meter. Anyway, he goes over there, releases an antidote cloud, Captain Stacey dies, Conners returns to normal and the day is saved. Hooray. And then things take a nose dive into stupidity when Peter tells Gwen that he cannot be with her in order to protect her. How is that any different to the end of  Spider-Man? Well, at least in that film, he had the decency to attend a funeral! He skips it in this one!

And finally, the sub plot. You know the one I’m talking about. Peters parents. I’m just going to say it… I don’t give a damn. It seems relatively unimportant, not that they don’t try and make it seem important. Peter’s parents have never been an essential part of his backstory. He lives with his aunt and uncle. That’s it. That’s all we need. In the comics there was this reveal that they were spies but it didn’t really affect him on a permanent level. After he found out, Peter went on as normal. It was only a big thing in the Ultimate Spider-Man series, and at least then it was handled properly. It was a conspiracy, sure, but not one as big as what they are suggesting in this film. Maybe they’ll make something good of it, I don’t know. I just think it’s surplus to requirements.

So what can you say about The Amazing Spider-Man? Well, it has it’s good points but at the end of the day I simply think it came too soon. The original Sam Rami Spider-Man trilogy is still fairly fresh in our minds so, inevitably, comparisons will be made. Plus, it’s not like The Incredible Hulk where the film you’re rebooting was awful. The original trilogy was rather good (Apart from the third, obviously) so they really needed to wait longer to do this. Five years isn’t enough. If it came a few years from now, maybe we could have been kinder to it. Sadly, we will never know.

What did YOU think of The Amazing Spider-Man? Was it as tight as a well stretched web line or as regretful as the Spider-mobile? Why not say so in the comments below or on Twitter? If you do I’ll be your best friend. Promise!