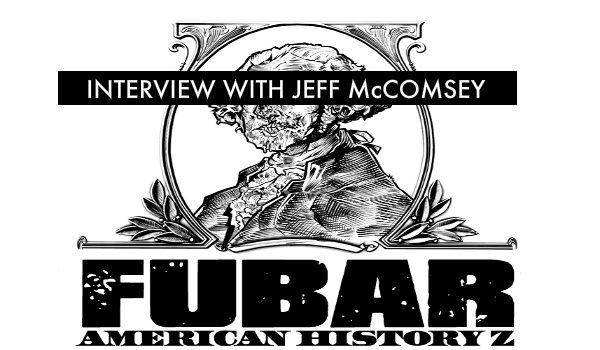 For all of the game demos, giant Lego statues, and cornucopia of Deadpools that make up New York Comic Con, my favorite part of the Con, really any convention, is seeking out the smaller independent titles that manage to bottle the fervor and passion of comics that can sometimes be eclipsed by silver-screen based media. Fortunately, New York Comic Con 2013 was no different, and I was able to score an interview with one of the few titles to still champion the comic book novella, with a healthy abundance of automatic weapons and shambling undead for good measure. So, without further ado, please enjoy this transcript of my interview with the editor- in-chief of FUBAR American History Z, Jeff McComsey. 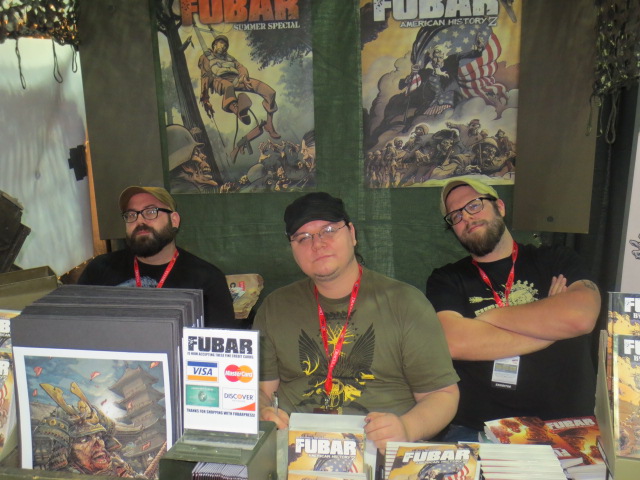 CD: I’m here with the creative team behind FUBAR; for someone who is uninitiated, what is FUBAR about?

JM: FUBAR is basically an American Historical Zombie anthology; so each of the volumes is a collection of short stories about different aspects of American history– with zombies.

CD: So besides the obvious American influences, what influences would you say helped create FUBAR?

JM: For us—for me personally—I’m a big fan of old school World War II comics. The first two volumes were just about different theatres of World War II, so for me it was just about re-creating some of the books that I loved.

CD: Did you have a favorite period of American history that you liked doing for this work in particular?

JM: Gosh. For me I would really have to say World War II. It was definitely the starter, it was really just an excuse for me to draw World War II comics, and we put zombies in it, and people would read them, so that’s important.

CD: (laughs) As do I, I appreciate this mix. Any zombie works in particular that you’re a fan of? What’s your favorite zombie movie maybe?

JM: Y’know what’s funny? I’d say the first one that—and this is terrible—really broke me into zombies would probably be 28 Days Later. I didn’t even realize I was walking into a zombie movie until like halfway through it, and I realized, wait a second, I really like this. Then after that I went back and watched all the classics.

CD: That’s awesome. So you just realized FUBAR: Blood and Sword, which focuses on…?

JM: We’ve done American history and this one basically focuses on world history, so it’s medieval, it’s Viking, it’s samurai—pretty much anything with a sword.

CD: That’s awesome, and how do zombies wield swords?

JM: Well, they don’t, they just get stabbed by them.

CD: Thanks for clarifying. So what’s up next for FUBAR?

JM: Well we just had a Kickstarter for a book called Mother Russia, so that’s about a World War II Sniper in Stalingrad; a female sniper, she finds a baby, and has to protect it from zombies. That one I’m working on now, and should probably be out sometime in early 2014.

CD: Are there any sort of incentives for Kickstarter backers for Mother Russia?

JM: We did a ton of stretch goals, when it started out. I asked for thirty five hundred dollars, I think it closed out at about ninety six thousand dollars, some insane amount. Basically there were like mini-comics — there was a reprint of the first Mother Russia story that I did; there’s a reprint of the first mini-comic for FUBAR, called Sgt. Killroy, that I did years ago, and we’re also going to do an exclusive Cold War FUBAR.

CD: Crazy damn awesome. Thank you for your time and look forward to seeing a review of FUBAR up soon!

That last sentence wasn’t directed to just Jeff McComsey, but to you, errant reader. FUBAR American History Z is a big ol’ graphic novel of a book; I’m talking omnibus levels of thickness.

How big is FUBAR American History Z? FUBAR is so big that if George Washington actually had to worry about red coats and the brown-burgundy-blood-spattered coats of the recently reanimated, FUBAR would be the go-to textbook in Americana Zombania 101.

So expect a full review, as well as additional interviews from other NYCC 2013 titles, in no time at all.