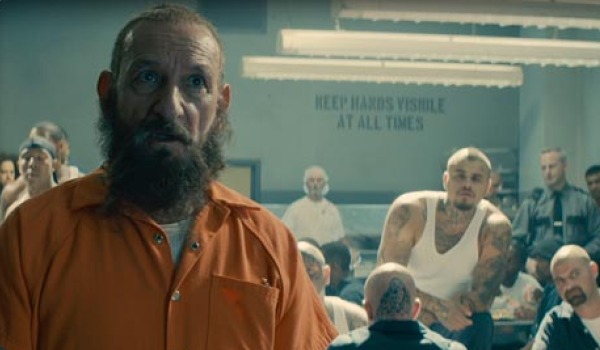 Though its initial reception was fairly rapturous after the underwhelming Iron Man 2, last years’ sequel, Iron Man 3, was not without controversy. Shane Black‘s trademark offbeat dark humor and Robert Downey, Jr.‘s traumatized post-Avengers Tony Stark were unequivocally great, but what about the film’s treatment of legendary Iron Man villain, The Mandarin? Though initially presented as a sinister, gravelly-voiced amalgam warlord, it was revealed — SPOILERS! — that Iron Man 3‘s Mandarin a character put on by self-obsessed actor-cum-inebriate Trevor Slattery (Sir Ben Kingsley) as a front for the film’s true villain, Stark business rival Aidan Killich (Guy Pierce). While Kingsley was no doubt an inspired bit of casting, many fans were disappointed that such an iconic figure would now be remembered not only as a sham but a joke in the eyes of the Marvel Cinematic Universe. If you count yourself among their number, All Hail the King, the new Marvel One-Shot could be the remedy for just what ails you.

All Hail the King opens with a quote from the opening scene of King Lear, “Come not between the dragon and his wrath”, and flashes of the familiar iconography that accompanied Killich’s fictional Mandarin. If such a portentous beginning seems somewhat at odds with what immediately follows – long-suffering documentarian Jack Norriss preparing for the last in a series of abortive interviews with the imprisoned Slattery – it neatly sets up the ultimate point of the One-Shot: rehabilitating The Mandarin’s image within the MCU. Slattery, meanwhile, is something of a celebrity at Seagate Prison; given the adulation he receives while walking down the cell-block, you might well think that he is the king of the film’s title.

The way All Hail the King is shot by writer/director Drew Pierce – who also co-wrote Iron Man 3 with Black – brings a distinctly ’70s thriller vibe to it, one bolstered by the presence of Scott McNairy as Norriss (McNairy being one of the main cast in 2012 Best Picture winner Argo). What All Hail the King gives us, though, more than anything is more Trevor Slattery. Which, regardless of what you thought of his presence in Iron Man 3, is no bad thing.

With his hulking volunteer bodyguard Herman (Lester Speight) in tow, Slattery seems to regard prison as something of a romp. Strolling through the lunch hall, he blithely discusses with whom they should sup, whether it should be serial killers or nonces – “I hear the Triads are a good giggle” – as though the whole thing were a society ball rather than Maximum Security. Slattery is still very much the anarchic figure we encountered in Iron Man 3; if anything, celebrity has made him even more of a luvvie, declaring he’ll never work with CBS again and making exasperated requests for chocolate milk. All Slattery need exchange for protection by his prison “fan base” is the occasional slip into the role that made him famous.

Alternatively wide-eyed and jittery, Kingsley seems to once more be having a great time as Slattery – it’s a hilarious dissection of a more extreme version of the sort of actors he must have encountered during a nearly fifty-year career. This time Kingsley is able to bring a hint of shrewd menace to Trevor, claiming to have very nearly become The Mandarin by inhabiting the role, though this may be, as we discover, a bit of an exaggeration.

It’s only through his discussion with Norriss that we are granted an insight into the Trevor that lies beneath all the football chants, the anecdotes and posturing. This is the closest that a comic book film, short or not, has come to character study. He blames the drugs for his failure to realize that he was a key participant in a terrorist plot, but admits when confronted with a photo of his mother and him as a young boy to being “a bloody great liar”. There are lots of solid jokes – Caged Heat like a spot-on parody of terrible ’80s cop shows and Slattery’s terrible Russian accent is a hoot – as well a surprising number of references to prison sex (“We’ve all been to drama school, have we not?”), but the reason All Hail the King works is because Trevor Slattery is an interesting character. He might not be The Mandarin we were looking for – there’s even a knowing reference to the “bloody vicious” Internet message boards – but that’s not to say we won’t get the real Mandarin off the back of him. As Norriss informs him, and as we known from the first Iron Man, the 10 Rings terrorist group is real and they’re not best pleased by Trevor’s usurpation of their historical leader’s name.

The end of All Hail the King may feel a tad anticlimactic given what’s preceded it, but its gives Kingsley a brief chance to show off his dramatic chops – the man was Gandhi for Chrissake’s! – and leaves the door open for both Slattery and the real Mandarin. If Captain America’s love interest, Peggy Carter (Hayley Atwell), can get her own TV series off the back of her One-Shot, is it too much to hope Trevor Slattery might manage the same? Sir Ben might consider it beneath him, slumming on TV, but still, not bad for a secondary character that was originally supposed to have been killed off.

All Hail the King has a lot going for it, not least of all the mid-credit sequences – two of them! – that brings back a much-maligned figure from Iron Man 2. Not to spoil anything, but he used to have a robot army. And a boat. It might not have any huge revelations, but All Hail the King is thirteen-minutes of blissfully self-aware fan-bait and, at the very least, it fills the Avengers-shaped hole in our heart during the span between Thor: The Dark World and Captain America: The Winter Soldier. What more can you ask for than that?

Marvel One-Shot All Hail the King gets a well-deserved 8/10.