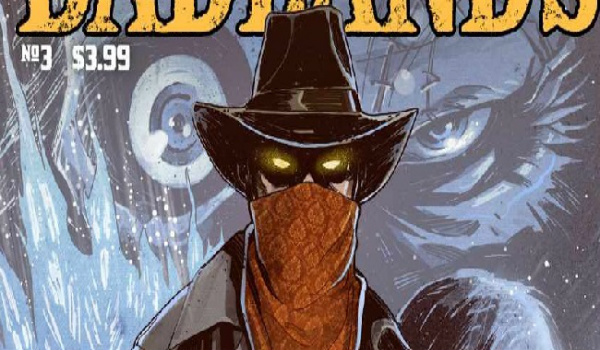 The Western genre has seen a huge decline in recent years. Even more so, the Western comic genre has died out to the extent that the very mention of a Western-themed comic often results in the sight of tumbleweed being blown by the wind.

Which is why Tall Tales from the Badlands #3 comes as such a fresh and innovative surprise. A selection of stories about the Wild West, each with all the lassoing, gun fighting and train robbing you would expect. There’s also some darker and more horrific elements that most classic pre-Hays Code Westerns would shun. Weird West would perhaps be a better label for the series. Or, as the title suggests, tall tales.

At fifty-five pages, the volume is considerably shorter than most other anthologies, and with each story only lasting several pages, it occasionally feels as though the writers were instructed to keep everything under a certain length. The diverse range of stories on offer more than makes up for this, however. The writers have explored every nook and cranny of westerns, leaving no stone unturned in their attempts to re-create every popular convention and attribute of the genre.

In this volume, we have the story of a monstrous corrupt judge who makes Judge Turpin look like Judge Judy, mining for gold, betrayals and train robbery. On the weird side, we have a story about cannibalism that does not really fit with its cartoony artwork, haunted mines, and people from the future visiting the Wild West then traveling home because they cannot adapt to the lifestyle, in a sly nod to the decline of the Western genre.

The black and white look, something becoming ever more popular in comics, gives the book a distant, almost detached feel. Something that works to great effect, because as all the stories have a heart, we meet characters who we are unsure if we should detest or respect. We want to learn more about why corruption was so powerful that countless innocent people were sent to their deaths, how a man can become so desperate that he turned a gun on his family, and how the promise of finding gold in an abandoned mine can make people abandon all sense of human dignity in pursuit of their greed. The west has never been this human.

Tall Tales from the Badlands came out of nowhere to give the world a completely new spin on a genre long thought to have been hanged (sorry) and buried. It may only take about half an hour to read, but hopefully it will have created a new approach to the Western comic genre that will last forever.

Also look out for a very brief mention of a murder victim called Stan Lee. Yep, it’s the Weird West all right.

And if you enjoyed reading Tall Tales of the Badlands, check out some sales links from the publishers below: