Home » SECOND LOOK: Batman: Whatever Happened to the Caped Crusader? 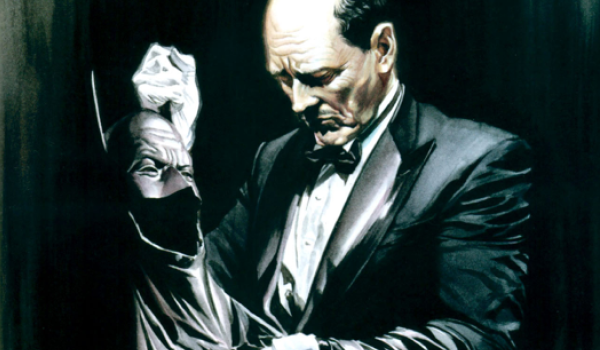 Say what you want about Batman, but he’s not the poster child for mental stability. His whole life was determined by a tragedy that took place when he was a child to people he can barely remember. He was raised by his manservant, a legal guardian Bruce is equally capable of sending to bed as Alfred is he. He spends his nights dressed in a cape, cowl and bodysuit, taking down dangerous criminals, and his days pretending to be an irreverent playboy as cover for his nocturnal activities. More than perhaps any other superhero, Batman is a character defined by his villains. It takes someone like Neil Gaiman, though, to weave a tale out of their impressions of him.

Batman: Whatever Happened to the Caped Crusader? is something new and weird in the superhero genre, a real treat. What it lacks in plot, it makes up for in character. Though seeming to take its cues from Alan Moore’s similarly-titled Superman: Whatever Happened to the Man of Tomorrow, Caped Crusader? owes more to Gaiman’s own Sandman series. Batman is dead and his wake is being held in a bar off Crime Alley. Friends and enemies alike gather to pay their respect, each with their own story of the Caped Crusader and how he died. The line between “reality” and fantasy blurs as a succession of unreliable narrators take the stage to offer their perspective.

Set canonically between the events of Batman R.I.P. and Final Crisis, Caped Crusader? seizes the opportunity to present definitive Batman: Superman may be mythological, larger than life, but Batman is mythic, a being shrouded in supposition and superstition. In stylistically distinct segments, each intended to evoke a previous Batman artist – of which Andy Kubert does a superb job – Selina Kyle remembers Batman as a Robin Hood-like figure while the Joker takes responsibility for his death but claims he never got the satisfaction of a smile. As the Joker tells a would-be valet out in the alley, he only kills people when it’s funny – Batman’s death is anything but. There’s also Alfred’s take, which contains an improbable transformation.

Each eulogizer offers up a different death for the hero, all of them tragic, all of them sacrificial: whether it’s saving the whole of Gotham from a bomb or rescuing a single child trapped in a flood, Batman dies protecting the innocent and bringing the guilty to justice. Meanwhile, Bruce looks on, strangely aware of his own passing, accompanied by a figure who is not Death. After all, how could Batman truly die? Even his parent’s murderer, Joe Chill, is there, despite being dead himself. Death, time, different continuities, it seems nothing can prevent this force of nature from coming full circle. That’s something Gaiman seems to appreciate so strongly: That Batman is doomed in himself but a bastion of hope to others.

Each of these heroes and villains present for his wake is intimately connected to him and each of their stories touches us in a different way, but it’s their unquestioning presence proves one thing, that Batman is transcendental in a way that, in my opinion, even the heavenly Superman can’t be. It’s because of this that Gaiman’s composite Batman is stronger than any one version of the character could be. He is the Batman, definite article, ensconced in a parable that dates back to 1939. There’s a lot of story behind him and Caped Crusader? lays it out before us like lines on a map. It’s true, perhaps, that nothing in Batman’s life became him like the leaving of it, but safe to say, he’s not gone yet.

But what do you think? Are you a fan of the more metaphysical Batman story or do you think it all just sounds a bit airy-fairy? Sound off in the comments or send us your thoughts on Twitter!