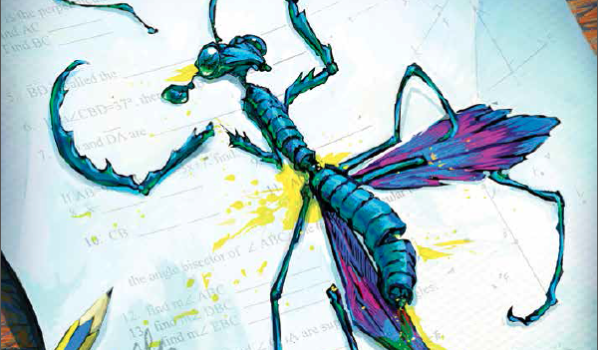 As seismic an event as was the end of South African apartheid, it’s one that appears all-too infrequently in literature. Most people would be pressed to name one work of non-fiction that deals with the topic, beyond other than the Booker Prize-winning Disgrace, or indeed one South African author beyond J. M. Coetzee. It seems South African authors are a rare commodity, too. As such, Mengelmoes, a story set in the immediate aftermath of the National Party regime, written and illustrated by London-based SA native Willem Samuel, is a bit of a mythical beast. It even comes in graphic novel form.

Based on Willem’s own childhood experiences, the first installment of Mengelmoes, “The Schoolboy” takes an almost day-in-the-life approach, combining the mundane aspects of an average school day – sums, hymns, daydreaming – with abrupt, often darkly comic flights of fantasy. A soaring dream sequence, for instance, filled with morbid iconography is cut short when Willem’s alarm clock goes off, blowing out the side of his head with a monumental “BEEP”. Full of autobiographical detail, Mengelmoes authentically represents what it’s like to be a introverted, imaginative kid growing up in the ’90s.

The events that take place in Mengelmoes are by no means specific to South Africa – Willem’s concerns about hiding Playboys and not getting caught smoking are pretty universal – but there are definite hints of what’s to come. Nelson Mandela may have just come to power but Willem’s too caught up in his own world to pay that much attention. Whether he’s wrapped up in the possible ramifications of talking to girls (he could wipe out or he might, just might get lucky) or dreaming up a cameo by Judge Dredd on his ride to school, Willem’s sarky, insightful narration guides us through.

We’ll be reviewing Mengelmoes 2: “The Matric” just as soon as we get our hands on a copy.