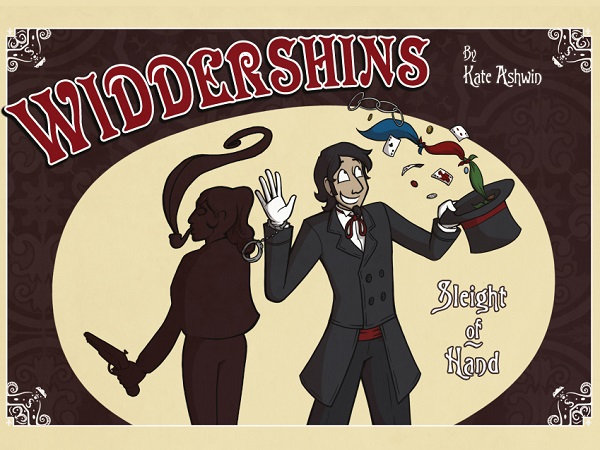 Kate Ashwin is the author of the on-going webcomic Widdershins. We had a chat with her recently and got a chance to talk canine companions, fan feedback and the return of her character, Wolfe…

AP2HYC: To start with, for anyone who isn’t familiar with Widdershins, could you give us a bit of a summary of what it’s all about?

Kate Ashwin: It’s a series of Victorian-era adventure stories, all set in the Yorkshire town of Widdershins. They’re light-hearted, fun yarns about wizards, bounty hunters, magical spirits and such. The first (and best place to start!) is about a failed magician that accidentally becomes the king of thieves, and the grumpy, chain-smoking bounty hunter that has to pull him out of trouble.

AP2HYC: As a your work is a webcomic, you obviously get almost instant fan feedback. How do you feel about reader interaction online? Does it influence you when writing?

Kate: I love it! You get some really genuine reactions from people surprised to see a twist, or happy to spot a character they enjoy. It’s a real buzz to know that there are people out there reading this thing that I’m making and enjoying it, and having the comments under the comic make it like they’re all reading along together. And yes, sometimes it does influence me. While I have a story plotted out before I start it, small details are subject to change, and sometimes someone will say something that will lead me thinking along a different path than I had been, which is very useful.

I know a lot of people disallow comments due to the nature of the internet sometimes producing some pretty snide remarks, but I’m blessed with a smart and polite fanbase, and haven’t had to delete a single one yet.

AP2HYC: Can you tell us your personal process when creating new comics and characters?

Kate: I don’t have a set process, as such. The seed of an idea can hit at any time – quite often in the shower, for some reason – and then I just crack open a sketchbook and start writing. It helps to write down absolutely everything, no matter how dumb it may be, because you might look back on it a few weeks later and think about a better angle on a previously rejected story that might totally make it work.

Then after I’ve got the basic idea, I scribble out a loose version of the story, try to figure out where the holes are and adjust it. Then you figure out what the overall themes of the story are- trust me, for some reason these aren’t apparent until a draft or two in- and rearrange things to serve those themes as strongly as you can. Lots of drafts, redrafts, cutting and combining ideas and saving pieces for later stories. There’s a great list of rules of storytelling as defined by Pixar which is very much worth a read for any aspiring writer – which you can read here.

AP2HYC: And what part of that process do you enjoy the most? Why is that?

Kate: Definitely building up a character. Layering up their background and experiences, and how those will have affected them. You can come up with a character and say they’re a drifter, but the fun is in working out how they got to that point and what sort of person they are as a result.

In particular I try to think of at least three adjectives that describe their personality. It’s quite easy to fall into the trap of creating a pretty undefined ‘hero’ type who doesn’t really have any traits beyond ‘courageous’, and it’s an exercise that seems to serve me pretty well. 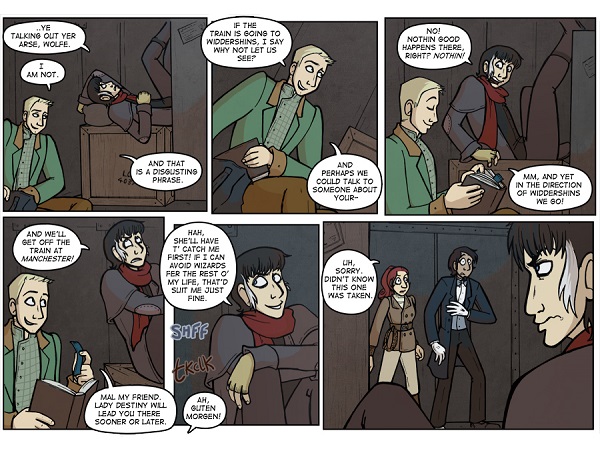 AP2HYC: I love Harry’s canine companion, Gren. What made you decide to give Harry an animal sidekick?

Kate: Honestly? I just love dogs! They’re really expressive and make for some nice comedy moments. Also, every adventurer needs a trusty sidekick, even if they do have fleas!

AP2HYC: Who are your inspirations in the world of comics, and why?

Kate: I’m always constantly blown away by the work of a lot of webcomic artists these days- The fascinating world of Gunnerkrigg court, the clever composition of Dead Winter, the perfect body language and character definition in TJ and Amal… I could name millions. The Tintin books in particular are also a big ol’ factor in the adventure-trek style that I love so much, and, while they aren’t comics, I don’t think I’d be writing today without the humour of the Discworld series getting to me at an early age.

AP2HYC: Fans seem very glad to see the return of Wolfe. Can you give us any sneak peeks on what we might see in the current story?

Kate: Clearly they are easily swayed by a pretty face! This is definitely Wolfe’s chapter, where we’re going into the background of how a former Prussian soldier ended up wandering around Europe with a cranky jerkface who can see magical spirits. It’s all building up to some stuff that’ll be pretty important in the next two books, so I hope people enjoy it!

Widdershins is free to read on Kate’s website here and is updated every Monday, Wednesday and Friday!