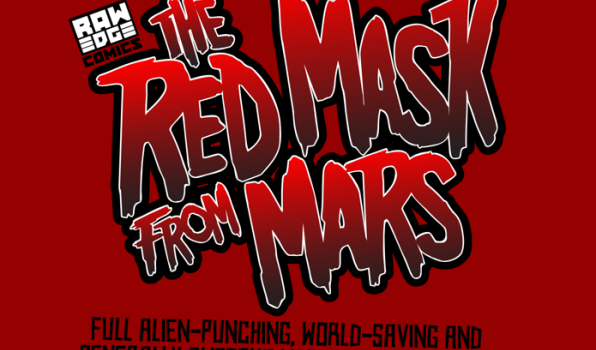 If you could distil the energy found in a young teenager, who’s just had a meal of Skittles, cookies and pop-tarts then washed it all down with coffee, into a comic book, you may create something akin to Vincent Hunt’s The Red Mask From Mars.

On reading the comic for the first time, I instantly thought this is something you’d watch on a Saturday morning ruled by CITV. Even with the occasional blue-tongue language, it still reads as if an 11-year-old wrote this thing. But derogatory as that may sound, I mean it in the fullest of compliments.

Issue 1 of The Red Mask From Mars follows our hero – ex-astronaut Doug Stewart, as he works as the number one member for Xenosphere, a taskforce set up to defend the Earth from alien attacks. Oh, and he has a red alien stuck to his face, which of course gives him super-human powers. Subtext? Sod off!

No amount of occasional adult language can steer this comic away from being immensely cartoon-like (the cover page looks as though it would make a great intro, akin to Spider-Man: The Animated Series). The characters come across as rather 2D, with little back-story, other than the anger-fuelled Sgt. Price letting it slip that she has a son. The aliens featured throughout this first issue also attack without any real motivation. They appear to just showup and cause havoc, but given that this issue is the first of a five-part story, let’s not be too quick to pass judgement.

The artwork, also done by Hunt with colouring by Shaun Dobie, is what saves this comic from drowning in its own child-like zaniness. Throughout, there’s a glossy, thick richness to everything, which carries the slightly uninspired alien/character designs fairly well. Sgt. Price is a near-total tomboy, complete with muscle and chain, while alien-mind-reading side-kick George is plainly bald and flatly quirky looking. The aliens are rather basic as well, the first of which is little more than a green pile of glob with tentacles.

The tone of the comic is fairly consistent as well; it rides along its alien-killing, insult-throwing tone at breakneck speed, were it not for the occasional squashed clumps of dialogue, sometimes taking up half a panel while crushing the character’s face into whatever free side of panel is left. There’s a distinct lack of location to this story as well. It’s well established right from the first page that we’re in England. English locations are spun out to the max, characters indulge in cheese sarnies, but even when they say ‘bloody’ a lot, there’s still a sense of vagueness in the precise locale of the story.

But overall, I still liked this comic. We’re only 1/5th into the story, so who knows what else may happen to Doug and the gang. The cursory language and squeamish violence suggests it’s aimed at the Adult Swim market, yet take the language away and this would make an entertaining Saturday morning cartoon, one that you wouldn’t just watch – one that you’d want to watch.

Have you read The Red Mask From Mars? Did you agree with this review? Let us know via Twitter or Facebook!